Landerneau, France: Michael Matthews has asked fans at the Tour de France to give riders more space after a roadside spectator caused a massive crash on a dramatic opening stage on Saturday.

The in-form Australian came down in the sickening pile-up that occurred after a fan, who appeared to be looking up and not at the approaching peloton, held out a cardboard banner, which Tony Martin (Jumbo-Visma) rode into. Martin landed heavily on his head, skidding along the road as others then came down all around him.

Matthews (BikeExchange) in the aftermath of the crash thought his bike was broken, but recovered to pip title contender Primoz Roglic (Jumbo-Visma) in an impressive sprint for second behind world champion Julian Alaphilippe (Deceuninck-Quick-Step), who has taken the first yellow jersey of the race. Fellow Australian Jack Haig (Bahrain Victorious) finished fourth. 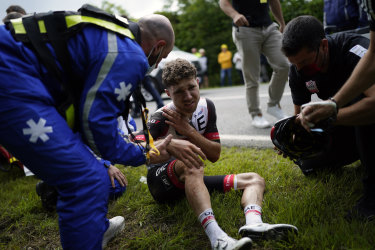 Switzerland’s Marc Hirschi gets medical assistance after crashing during the first stage of the Tour de France.Credit:

“I was in the big crash. I landed on a lot of people, which helps me out to have a softer landing. But I thought my bike was broken so I stopped with 25km to go to check if it was OK and the mechanic said it’s alright, so I pressed on,” Matthews said.

Tour organisers have taken many measures to ensure teams are physically distanced from media and fans at stage starts and finishes during the COVID-19 pandemic. However, it’s difficult to police entire stage routes that thousands of supporters lined on Saturday in support of the race and as they return to relative normality following eased restrictions.

“It just shows that the fans need to be more careful. It’s great that they are here, for sure, but you can destroy someone’s Tour de France with a stupid mistake like this from a fan,” Matthews said. 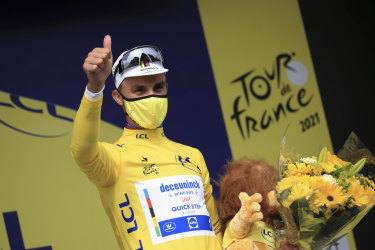 “Hopefully everyone gives us a bit more space. It’s great that the Tour de France has allowed spectators, which, they could close the roads, but everyone just needs to be a little more careful, I think.”

The incident was one of two big crashes that punctuated the undulating 197.8km stage from Brest to Landerneau.

Richie Porte was held up in the first pile-up but then came down in a high-speed crash within the final 10km of the race, landing on Rio Olympic champion Greg Van Avermaet. 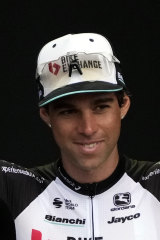 Australian Michael Matthews has asked fans at the Tour de France to give riders more space after a roadside spectator caused a massive crash.Credit:

Porte, who last week told The Age he wants to support teammate Geraint Thomas at the Tour despite finishing a career-best third with Trek-Segafredo last season, lost two minutes and 16 seconds on general classification but wasn’t injured.

“The first crash I was just a little bit too far back, bit separated from the guys. It was a big old crash I suppose and just one of those things,” Porte said. “It’s always stressful the first days of the Tour, especially roads like we did today, but it’s just part of it.

“Then the second crash I wasn’t particularly far back it’s just when a crash like that happens, what more can you do to be honest. The good thing for us is that G [Thomas] and [Richard] Carapaz are still up there, and tomorrow is a new day. I lost two minutes today but it’s not over. It’s all to fight for still.”

Matthews was happy with his start to the Tour and will have another shot at victory on Sunday’s 183.5km second stage to the Mur-de-Bretagne, which the 2017 green jersey champion believes could suit his characteristics more despite acknowledging that Alaphilippe is “flying”.

“The goal was the stage win today there was just one guy stronger than me unfortunately. I think we did a good race. We got also top three in the intermediate sprint, which was good and then finishing off with second in the finish there I think it’s a good start to the Tour de France that’s for sure,” Matthews said.