You’d struggle to find a cricketer in the history of the game with a bigger gap between their batting and bowling averages – of the positive kind – than Australia’s rising star Tahlia McGrath ahead of a blockbuster Commonwealth Games semi-final against either New Zealand or England on Saturday.

By the end of Australia’s 44-run victory over Pakistan in their final pool match on Wednesday, in a game where McGrath blasted a flawless 78 not out from 51 balls, the all-rounder’s career statistics read like a cricketer’s Christmas list.

From 12 T20 international matches, McGrath has been dismissed twice and boasts an average of 169.5. With the ball, the 26-year-old has 10 wickets at 11 runs per scalp.

McGrath knows her Bradman-esque numbers are not sustainable, but she’s certainly enjoying the ride, having asserted herself as Australia’s most consistent batter at the top of the order since she debuted against India in October.

Of the players who have batted five or more times in women’s T20 internationals, only India’s Anak Bastari has a higher average (177 runs at 177). 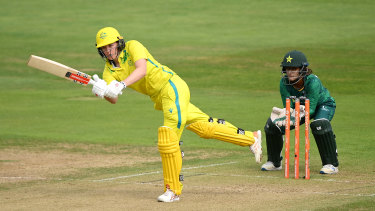 Tahlia McGrath hits out against Pakistan.Credit:Getty

“I did joke that when I got out the first time I was going to retire and keep that average,” McGrath said. “There’s always banter in this team. There have been a few comments [about the average].”

Perhaps just as impressive is that McGrath’s career strike rate is 156.22. She says a desire to play all three formats has contributed to her scoring faster.

“I started my international career and was probably pigeonholed as a 50-over player purely because my strike rate wasn’t near where it needed to be,” McGrath said. “That was a massive focus for me. To be [striking] at 150, I don’t know how long I’ll keep it there, but I’ll try my best.”

Under blue skies at Edgbaston, McGrath and Beth Mooney (70 not out from 49 balls) helped Australia recover from 2-19, after the early wickets of Alyssa Healy (4) and Meg Lanning (4), by plundering an unbeaten 141-run stand.

It was the highest third-wicket partnership ever by the Australians in T20s, eclipsing McGrath and Lanning’s 135-run stand last month against Ireland. The 141-run partnership was also the fourth-highest ever, for any wicket, by Australia in the shortest format.

McGrath and Mooney used their crease cleverly and showed brute force square of the wicket as Pakistan’s bowlers struggled to stem the flow of runs on a quick outfield. Australia scored 102 runs from their final 10 overs.

In response, Pakistan lost two wickets inside two overs and didn’t recover. They were 8-116 at the end of their 20 overs, with McGrath snaring 3-13 from three overs to bring her career average down from an already brilliant 13.85 to 11 on the dot. 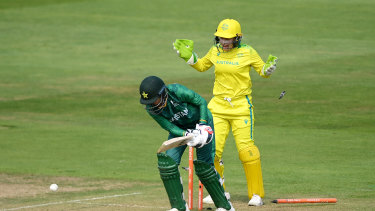 “The game can be taken away from you like we saw today with Tahlia coming in,” Mooney said. “She played an unbelievable innings. She seems really clear on her role in the team.”

The win was Australia’s third in a row, but it’ll mean nothing without another A-grade performance on Saturday.

“Moving into finals all the work we’ve done in the round games is irrelevant,” McGrath said. “Everyone starts from scratch. It’s knockout. In saying that, we take a lot of confidence and momentum.”

Mooney added: “Pressure is a bit of a privilege in my eyes. There’s certainly no amount of pressure that’s more than what we put on ourselves to perform day in and day out.

“The challenge that awaits us is really exciting. Semi-finals are sometimes harder than finals. You have to be on your game from ball one.

“You want a spot in that gold medal match. We know on our best day we can beat anyone.”

McEvoy could add to Legend in HK