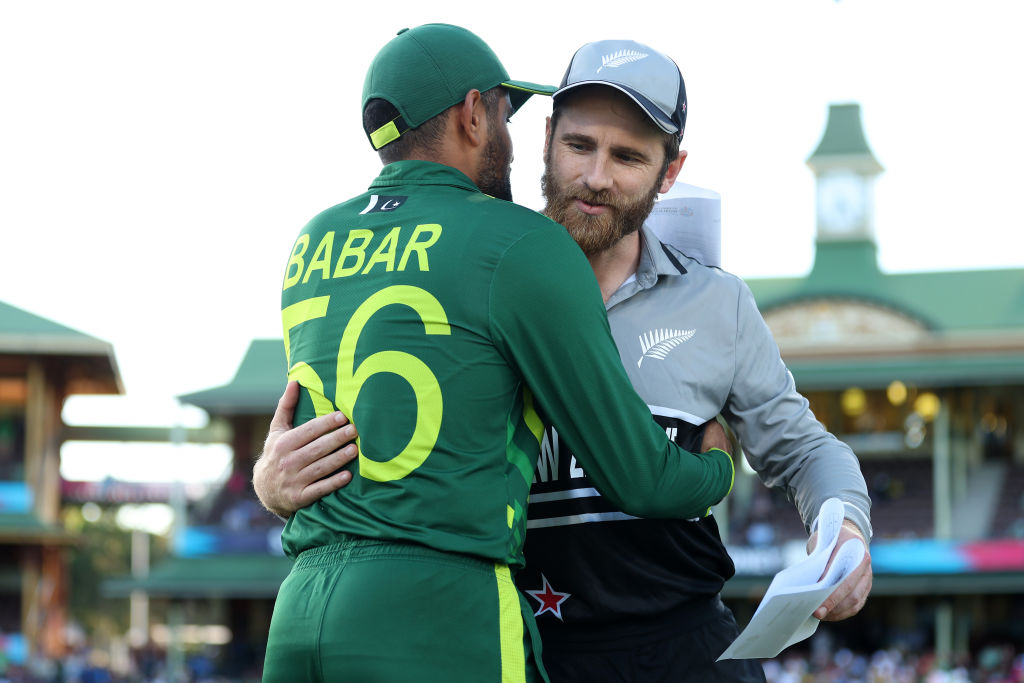 Babar Azam hailed his Pakistan side after they continued their remarkable T20 World Cup turnaround to beat New Zealand and reach Sunday’s final.

Pakistan were on the verge of crashing out of the tournament after losing their opening two games in final-ball thrillers.

But Babar’s team won their final three group games and saw other results go their way to make the semi-finals and set up a clash with last year’s runners-up New Zealand.

Babar and Mohammad Rizwan then shared a 105-run opening partnership as Pakistan cruised to victory with seven wickets and five balls remaining.

Pakistan will face the winner of the second semi-final between India and England in Sunday’s final at the MCG.

‘The team has performed so well in the last three matches and they followed that today,’ Pakistan captain Babar said. ‘I want to thank the crowd, it feels like we are playing at home.

‘We had a really good start with the first six overs, we knew our spinners could then come on later. We were happy to chase 150.

‘We had a plan before the chase to attack the first six overs so we could get the momentum. And we knew later on the other players could chip in.

‘We will enjoy this moment but at the same time we have got to focus on the final. We don’t know who we’ve got yet so we will be watching tomorrow, but we have got a few days to get together and discuss that game.’

New Zealand topped Super 12 Group 1 ahead of England and Australia but were outplayed by Pakistan, with Daryl Mitchell offering the only real resistance with 53 not out from 35 balls.

The Black Caps were poor with the ball, pace bowlers Trent Boult and Lockie Ferguson going for 70 from their eight overs.

New Zealand skipper Kane Williamson said: ‘We were put under pressure early, they bowled really well and it was thanks to an unbelievable knock from Daryl Mitchell we got some momentum back.

‘At halfway, we thought it was a competitive total because we knew the pitch was a used surface, it was tough.

‘But it’s really disappointing to not make Pakistan work harder for those runs, they were absolutely outstanding today and credit has to go to them.

‘It is a tough pill to swallow. Babar and Rizwan put us under pressure but if we are honest with ourselves, we should have been more disciplined. They deserved to be the winners of that game.

‘We have played a lot of good cricket, we have stuck to what has given us a lot of success but today we weren’t at our best.’