If things had taken a different turn Icebath’s owner David Basheer would be more than comfortable in the Randwick racecaller’s box painting the picture of the inaugural running of The Invitation, rather than a nervous wreck watching his prized mare.

Basheer, whose voice is familiar to sports lovers from football World Cups, World Athletics Championships and grand slam tennis finals, says his first passion was racing and even after a successful career around the world the urge to call races runs strong. 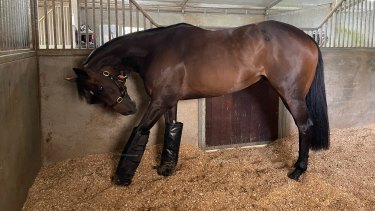 Icebath in her ice boots as she prepares for The Invitation at Randwick on Saturday.

Basheer went as far as finding a vacant broadcast box at Kembla Grange 15 years ago, to hone his skills when he returned from a successful stint with Star Sports in Asia.

“I went to Kembla to see how I would go. I was hoping to get to calling trials and maybe even a race or two,” Basheer said.

“I wasn’t seriously contemplating moving from sports commentary that I had been doing for years to go race calling. But it was certainly something I always wanted to do.

“A good mate of mine Matt Hill who was calling down there. We go there together and I wanted to see if I could do it. I did phantom race calls as a kid at school cracking up all my mates. It was the first sport I had a passion for, and I want to be race caller.

“But when that didn’t happen I pursued general sport and got a cadetship at the ABC in 1987.”

It is a career highlighted by calling the World Cup final between Spain and The Netherlands in 2010, one of nine World Cups Basheer has worked, four men’s and five women’s. He has seen and told the story of the biggest sporting events around the world, but nerves can’t match watching Icebath make her way to the barriers for another big race.

“When I was a teenager I would dream of calling these races rather than owning a horse in them,” Basheer said. “It is the purest form of sports commentary I know. I just have so much professional respect for race callers.

“There is nowhere to hide and there is no going back in racing. The really good callers, it’s not just call out names, they paint a picture and emotionally get you into a race.”

Emotion isn’t a problem for Basheer when it comes to Icebath, who he owns with twin brother Simon and good friend David McGrath and Tass Roufus. 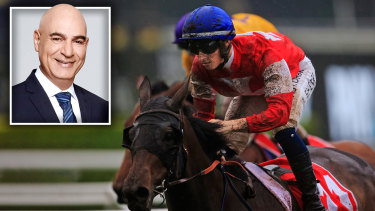 She has won more than $2 million in prizemoney from her 24 starts for the group, which has included seconds in the Golden Eagle and the Doncaster. She has only won on three occasions, the last in benchmark company at this meeting last year.

“When she races it’s totally out of my control, I’m more nervous whenever she runs than being behind the microphone,” Basheer said. “I’m in control then.

“We never thought we would have a horse like her. We dreamed of it but to have her run in the races she has run in is amazing.

“The frustrating thing is she hasn’t won one yet.

“Not just for us but for [trainer] Brad Widdup, who is with her every day and couldn’t have done better. He deserves to be the winner in a race like The Invitation as much as she does.”

Icebath is the best horse Widdup has had since starting training in his own right a couple of years. He makes sure she is presented at her best every time she goes to track and the care from icing her leg her day to physio care.

The frustration of being so close has been tempered by prizemoney. But in the end, racing is about winning.

“I would love to have a Golden Eagle trophy and especially a Doncaster trophy, that was my dream race, but when I look at the bank balance she has done a lot for us,” Widdup said.

“This spring is the best order she has been in, and she just has had no luck. I just want the luck to fall our way for a change.

“We had her at her top for the Epsom, and she didn’t get any luck in the straight, but the way she pulled up after that was amazing.

“This race was the next target, and then we draw the outside. Hopefully, that’s the bad luck out the way, and she gets the right run without getting stopped in the straight.”

Basheer is hoping it will be a return to the winner’s stall for Icebath, even though he will have to watch from Melbourne. He admits his neighbours would know of his disappointment as Icebath has had little luck in the Golden Pendant and Epsom at her past two runs.

“The Epsom was a crushing watch,” Basheer said. “You could see she was ready to go and had nowhere to go.

“The last uninterrupted run she had was in the benchmark 78 she won by four lengths on this day last year.

“We can only hope it changes this time.”