Home » Sports News » Blown back to the future: the loved-loathed Smith thrust back into the spotlight

Adelaide: It was an innocent buzz announcing the arrival of a text message for a Sydney club cricketer in an Adelaide restaurant on Wednesday night, but it had the effect of the distant fluttering of butterfly wings. Chaos theory was again at work in Australian cricket, and maybe it is not done yet.

Immediately, it precipitated the standing down of Australia’s new Test captain Pat Cummins for the second Test, the promotion of a debutant seam bowler Michael Neser into an already reduced attack, the naming of Travis Head as locum vice-captain, but most momentously, the restoration of Steve Smith as captain at least for this match. There was a hush in the city and across the land.

The tiers of COVID protocols that apply to travelling sporting troupes – and spectators – are byzantine and sometimes obtuse. The balance Cricket Australia and civil authorities try to strike between protecting players and chaining them up is delicate. There was bound to be a breach eventually. 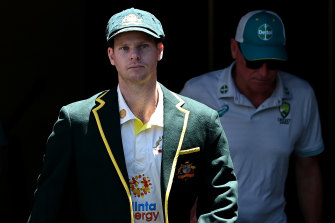 Though neither breaking the law nor infringing on the regulations, in fact by doing nothing more sinister than sitting down to a meal with a friend, Cummins suddenly was COVID collateral and Australia on the moral back foot.

In the same vein – always possible, yet barely contemplated – was the passing of the captain’s mace back to the hero/anti-hero Smith.

Cricket Australia chief executive Nick Hockley said Australia was “lucky” to have him at hand. It’s not the word others necessarily would have used. Nearly four years since Cape Town, there exists still in the Australian cricket body politic a strain of sentiment that hold that Smith should not be playing, let alone leading. It wasn’t lucky that he was at hand, it was unconscionably and lamentably convenient.

Hockley said Smith had served his time and proved his fitness. This is the bottom line. If CA had meant for Smith never to captain again, they could have framed his sentence that way. They did for David Warner. The ICC, remember, came with feather dusters at the time: one match for Smith, nothing at all for Warner.

In any justice system, there must be an allowance for redemption. Smith and Australia shocked their countryfolk in their time by the brazenness in setting themselves above the cricket law, but in the end all they did was scratch up a cricket ball. In two Melbourne courts this week, men whose actions had caused the deaths of innocents were given

jail sentences governed by their prospects of rehabilitation. Smith had to be afforded at least that.

Smith has spent four years rebuilding his standing. In truth, neither he nor CA would much have dwelled upon the return of his commission until another upheaval at the start of summer when Tim Paine’s career came to a juddering halt, and Cummins was made captain with Smith as his wingman, and then while everyone was still orienting themselves to a new regime, yet another convulsion on Wednesday night.

Hockley said the Australians were philosophical about the latest turn of events, shrugging it off as symptomatic of the times. On Twitter, Cummins said he was “gutted”, but his next thought was warm for the Neser and his Job-like patience. Cummins dialled into the team meeting; Zoom lives on.

An intrigue presented immediately. Would the captaincy galvanise Smith again as a batsman? His previous term consisted of 34 matches, 15 centuries and an average of 70, an outpouring. But since his stellar Ashes series in 2019, he has been in something of a rut, averaging 38. He’s no less in love with the game than before, but it is almost as if he’s in need of some sort of midlife stimulation. Perhaps a week as captain again will act as his sports car.

More immediately, there was a Test match to play and a decimated team to inspire. For the first time in seven years, Australia was without Cummins and Josh Hazlewood. In the turnover between Tests, Australia had a net loss of 380 frontline Test wickets and England a gain of 1026.

It showed. For the half of the day at Adelaide Oval, on a pitch the Australian batsmen appeared not quite to trust, England’s five-pronged heavy-duty seam attack tied them in knots.

The England bowlers averaged 33. That’s years old. Their lines of attack, remorseless and unrelenting, were full of that knowing. At one point, Ben Stokes assailed Warner with four men prowling for a miscued hook, but not even one slip. Marnus Labuschagne, too, was tested on his survival instincts. But even as the England bowlers menaced the Australian pair, they might have wished that one of them was something other than right-arm fast.

Adelaide Oval was as usual a sight to behold, but the charm of the cricket lay in the primal nature of contest rather than the spectacle.

COVID had “thrown us all some curve balls in recent years”, Cummins had said. As the sun sank behind the Adelaide Oval, it was the curve balls of Broad, Anderson, Robinson, Woakes and Stokes that fully occupied the attention of the new-old, loved-loathed Australian captain.