Bookmakers around the country face losing at least $50 million on Tuesday if Incentivise can become the shortest-priced favourite since Phar Lap to win the Melbourne Cup.

It is an old-fashioned Melbourne Cup with Australian stayers making up the majority of the field due to new regulations around starting in the race that stops the nation, and the betting has been a throwback to when Caulfield-Melbourne Cup doubles ruled the roost.

Incentivise has been well-supported in the doubles since his enormous talent become clear during the Brisbane carnival. His romp in the Caulfield Cup further enhanced punters’ confidence and has bookmakers checking their ledgers as he shoots for a 10th consecutive win.

“It is shaping as our worst result on the Melbourne Cup since we started trading in Australia,” Ladbrokes boss Dean Shannon said. “Incentivise is one of those horses that punters latched onto early and have just kept backing, and he just kept winning.

“Racing needs a superstar like him, but [that’s] no good if you’re the bookmaker on the wrong end of the ledger.

“The doubles alone are a couple of million and that doesn’t take into account what is in the win book. 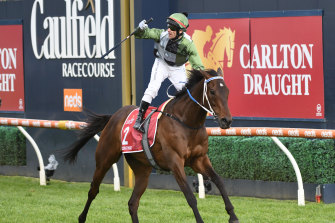 Incentivise has bookmakers fearing a massive payout as he looks for his 10th win on end in the Melbourne Cup.Credit:Getty Images

“We just want to find something to beat him, but to be honest we can’t find one.”

That is the problem for bookmakers with Incentivise, who they unanimously feel is the one to beat even though he steps to the unknown trip of 3200m.

There is a sense of foreboding about Tuesday for the bagmen.

“It’s the Melbourne Cup and as a bookmaker you want to take on the favourite,” TopSport’s Tristan Merlehan said.

“But with Incentivise it’s a double-edged sword for us because we have him rated an odds-on chance.

“But we are offering a promotion of the best of the best to lose $100,000 to any of our customers, which will make Incentivise our worst result for years.”

Incentivise was hovering around the $2.60 mark with most firms on Sunday afternoon, but could get out to around $3 on the tote by the time the Cup jumps at 3pm on Tuesday.

“There is no doubt in my mind that the best price come Cup time will be on the totes for Incentivise,” TAB’s Glenn Munsie said.

“We are going to lose nearly $3 million on doubles only if he wins. What you have to remember with that is at the TAB someone might have him as the last [leg of a] multi that started with Swedish handball or weightlifting at [the] Olympics. 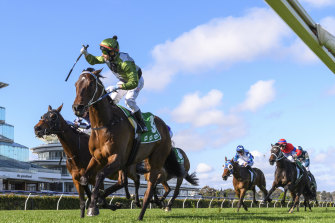 Incentivise powers to victory in the Turnbull Stakes.Credit:Getty Images

“He is the obvious one in the race and I think everybody wants to say they backed the Melbourne Cup winner, so they will probably have a ticket with his name on it.”

There has been some support for defending champion Twilight Payment and Australian horse of the year Verry Elleegant but the flow of money continues at pace for the favourite.

“He is very good, Incentivise, and might be the best stayer we have seen in Australia this century and he has found the weakest Melbourne Cup I can remember,” Bluebet boss Michael Sullivan said.

“They can all get beaten and we are hoping he will find a way to get him beaten.

“Surely, he can’t win. History is against him and so are we.

“Only one horse has won the Melbourne Cup carrying 57kg or more since it last happened in 1977 and that was Makybe Diva – we aren’t talking about Makybe Diva here. That is a telling stat.

“I’m holding on to the fact, Ethereal was the last horse to win Caulfield-Melbourne Cup double back in 2001 and of the 14 runners who’ve tried to replicate that feat under a penalty since, none have even run a place.”

Ocean Road on course for Oaks

Gosford preview: Sinba to make up the Deficit for Gerald Ryan and Sterling Alexiou after Pelter’s departure