Well over a decade after being implemented into international cricket, the decision review system (DRS) remains one of cricket's most vexed topics.

It seems barely a Test series goes by without some sort of DRS controversy. The latest flare-up came during the Boxing Day Test at the MCG, as Australian skipper Tim Paine accused third umpire Paul Wilson of rushing to overturn a caught behind decision which ultimately sent the Tasmanian packing in Australia's second innings. 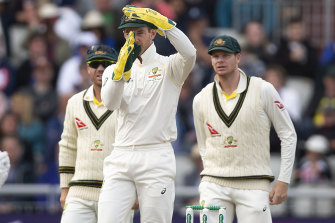 A referral from Tim Paine during the Ashes in 2019.Credit:Getty Images

Another factor is that there is no one uniform provider of the technology in international cricket. In Australia, the NZ-based Virtual Eye is used, while in England, Hawk-Eye is contracted.

No Australian has stood as an umpire in more Test matches than Daryl Harper, now 69 and living in South Australia. Harper umpired the last of his 95 Tests in 2011 but had remained formally in the game as a Cricket Australia match referee until last year.

Harper had been sceptical of the technology at first, but soon grew to become a fan. 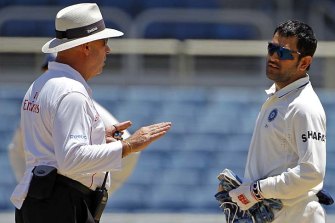 "I had a bit of trepidation about it, because there'd been a traditional role of the umpire for so long," Harper said.

"And now the authority of the umpire was being undermined. I soon realised we could make the most of it, we could get the best of both worlds."

But that didn't mean the system wasn't without teething problems, especially early. The technology had plenty of limitations, and umpires weren't always helped by logistics. A series 11 summers ago between South Africa and England got Harper embroiled in a saga that took months to solve.

"I was the third umpire in Johannesburg and I was getting the local feed, and right next door to me in the England dressing rooms, they were getting the international feed, which was far better than I had," he said. 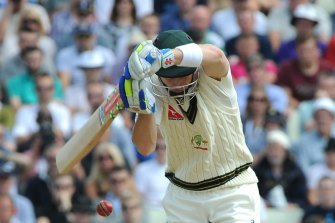 "Decision after decision went against the Poms. They demanded an enquiry after that Test match, and 7½ months later I was actually vindicated. But it didn't make headlines because it wasn't good news for an umpire to be right."

Peter Nevill was in the thick of the action as Australia's wicketkeeper in 17 Tests across 2015 and 2016. He says making the right call is harder than one might imagine.

"The decision [when fielding] would always rest with Steve [Smith] the captain but he'd always ask for the opinion of myself and whoever the bowler was," Nevill said.

"It could be difficult for a wicketkeeper at times because you couldn't see exactly where the ball has landed, for lbw as an example. Back in those days you didn't retain your decision if it was umpire's call, you had to be confident in your decision. It was such a fine margin. It was quite difficult actually to get it right. You can take it a bit for granted when you're sitting on the couch and you've got the slow motion. It looks like it should be quite easy to tell, but often the margins are so fine to get it right."

Nevill doesn't recall a great deal of planning around tactics for using DRS.

"From memory there wasn't a great deal of discussion about it. It was up to the top order batsmen, if they thought they weren't out or thought they were a chance of getting a decision overturned, to use it. It became a little bit tactical in that sense."

There are still problems, Harper says, pointing to Paine’s tight run-out call in the first innings at the ‘G.

"If there'd been another picture in between the two we were looking at, I think we probably could have ruled him out. So the technology after 12 years of this, it still isn't up to scratch."

Ever the loyalist to the umpiring cause, Harper also defended Wilson.

"Perhaps if Tim Paine went down to the under-16s in Hobart and umpired a couple of days of cricket, he might have a greater appreciation of what it's all about. Personally, I thought Paul Wilson did a mighty job."

But if there was one change he would make, it would be to eradicate umpire's call. He suggests that the idea of the ball only hitting part of the stumps and therefore not always being out is incongruous.

"I've had enough of umpire's call. Let's just ban umpire's call. Get rid of the controversy and just go with it. Any contact with ball on stump will dislodge a bail. No 48 per cent, 49 per cent.

"The fact it's been going for 12 years and the public are still mystified, and the players are still mystified, would suggest that there are some deficiencies in either the communication or the understanding. So there needs to be some serious work done from the ICC's end. Because we shouldn't be talking about umpiring decisions."

And yet for all its faults, there remains a concerted effort to bring DRS into the Big Bash League. The longstanding issue is that neither CA nor broadcasters have been prepared to stump up the money for it.

Nevill would actually like to see less latitude given to players.

"If it's umpire's call, you retain the review these days, I don't think it should," Nevill said.

"It's not meant to be for you to challenge an umpire's decision, it's for when they make a really bad decision."

This stadium could change cricket forever as America prepares for takeover