Home » Sports News » Chappell backs Green, Pucovski to be ‘marquee players for the next generation’ 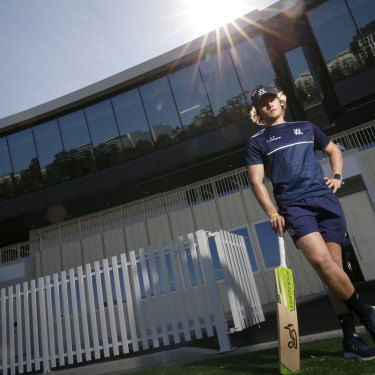 Will Pucovski has the potential to be a marquee player for Australia for the next decade, Greg Chappell says.Credit:Darrian Traynor

Dennis Lillee and Jeff Thomson. Shane Warne and Glenn McGrath. Steve Smith and David Warner. Some of Australia's champion players have come through in pairs. If the hype is real, Cameron Green and Will Pucovski are the next dynamic duo.

"I think Cameron and Will are those sorts of players who can be your marquee players for the next generation," Chappell, who left Australia's selection panel after last year's Ashes, says.

"As David and Steve wind down, they're the guys who come in, develop; they're the leaders and marquee players for the next generation."

It's not hard to see why the two are being hailed as the next big things in Australian cricket. Green is a 21-year-old rated by Chappell as the best young player he has seen since Ricky Ponting.

As a 17-year-old, he had national coach Justin Langer, then in charge of Western Australia, in awe with his first over of 145km/h seamers in the Sheffield Shield in early 2017.

So well did he bowl, Langer could not believe it was not his primary skill. He's that good with the bat, Chappell believes anything he can do with the ball is a bonus. Bear in mind, this is a young man with a first-class average of nearly 50 with the bat and 21 with the ball.

Pucovski, in just his fifth season, already has observers turning to the history books. He is the youngest player since Ponting to make a Shield double century and just the ninth to do so before turning 21. Last week, he and Marcus Harris broke the Waugh twins' 30-year-old Shield partnership record of 464. After 21 games, Pucovski can already boast scores of 255 not out, 243 and 188. 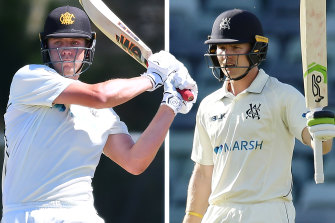 Next big things … Cameron Green and Will Pucovski.Credit:Getty

Cricket may be a numbers game, but if it was that simple selection would be based on spreadsheets.

When is a player ready for Test selection? Can they handle the pressure that accompanies the baggy green, the extra scrutiny and so on and so on.

Though both players have compelling numbers for promotion to the big time, there are reservations. In Pucovski's case, the questions are to do with his mind; in Green's case, his body.

First to the Victorian. Pucovski's situation is complex and sensitive. The gifted young Melburnian has taken time out of the game three times in the past two years citing mental health issues, the last two occasions coming with him being either in the Test squad or in serious contention for selection.

Pucvoski said before last week's epic knock against South Australia he had done the "head rehab" to be ready for Test selection.

"I see how far I’ve come and how much closer I am to being ready for that next level and I’m at a stage now where I feel I actually am, and truly believe I’d have the mental processes and capabilities to get there," Pucovski told The Risk Equation Podcast. "It has been a journey and it still is well and truly a journey. I’m still working on that sort of stuff every day and I’m doing different things to improve my life."

Pucovski has also had issues with concussion, from schoolboy football, which he believes affects his mental wellbeing. He made similarly encouraging comments in January last year only to withdraw from the Test squad a few weeks later.

Opinion is divided as to whether Pucovski should be picked. Victoria coach Chris Rogers said after the Shield game against South Australia he would like to see the youngster stay in the Shield to develop away from the glare of Test cricket. His remarks raised the hackles of those involved with Pucovski at the Melbourne Cricket Club.

Chappell, a champion of promoting youth through more than 30 years in coaching, selection and talent development, said though he was not qualified to comment on Pucovski's mental readiness, he believes the star batsman was better served being in the national set-up.

Australia's extended Test squad would be the ideal environment, Chappell said, for Pucovski to learn the ropes from the likes of Smith, Warner and Marnus Labuschagne without the immediate pressure of having to play.

"You don't break them," Chappell says. "You might bend them a few times, but that might be part of what they need.

"The awareness has to be there that you get them out of there before you break them. Bradman played two or three Tests and got dropped. Everyone has been dropped at some point. You've got to get to the point of almost breaking them to develop them to the point they can get to. 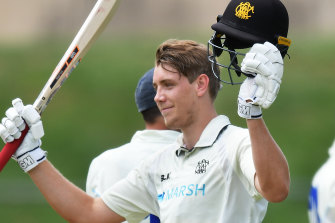 Cameron Green is destined for greatness, according to many experts in Australian cricket.Credit:Getty

Green is going through the rites of passage for fast bowlers – stress fractures in the back – except, as a potential wonderbat, he does not need to.

Chappell sees Green's greatest value to Australian cricket as a batsman whose bowling is "very secondary". He does not want Green's development with the bat to be compromised by injuries sustained while bowling.

WA coach Adam Voges concurs. Green, he says, loves batting almost as much as Smith and Labuschagne, to the point where if they left him to his own devices at training he would not take the pads off to bowl. He has a startling warning for those who want to press Green with the ball.

"I just worry if we push him too hard, too soon and he breaks again we may struggle to get that all-round package that everyone's excited about," Voges says. "He's played as a batter with the stress fractures he's had in the past, but the amount of work that needs to happen for rehab from stress fractures, then the technical changes he makes, there's a lot that goes into it.

"For him to go through that for a third time I'm just not sure how committed he'd be to wanting to get the ball back in his hands. I think we need to be patient and hopefully we can do that."

Given Langer and Hohns have said the top six is settled, Pucovski and Green may also need to wait, but it seems only a matter of time before they join the baggy green club.