Trevor Hohns’ retirement as Australia’s selection chair will sever the last link to a dominant era, as Cricket Australia weighs up the balance of power between the selectors and national team coach Justin Langer.

The Age and the Sydney Morning Herald can reveal Hohns recently handed in his notice after the second of two stints as chair of selectors. His time in charge has added up to a combined 16 years, spanning 1995 to 2021 and featuring many of Australian cricket’s most dominant summers as he quietly managed successful transitions of several generations of international cricketers. 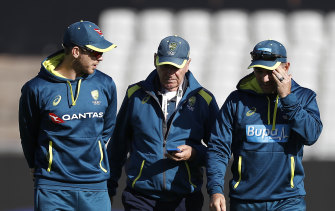 While just 39 years old when he joined the panel in 1993 and 41 when he became chairman, Hohns is drawn from a generation of selectors who learned most of what they knew about talent identification and team-building from the legendary Laurie Sawle. As selection chair between 1983 and 1995, while also an Australian Cricket Board director, Sawle oversaw the nation’s rise to the top of world cricket, before handing the reins over to Hohns.

Plain-speaking but not abrupt, thoughtful but not over-complicated, Hohns possessed a deep passion for cricket and a thick hide for the countless difficult conversations his role entailed over several decades.

His replacement is likely to be 38-year-old selector George Bailey, leaving one vacant spot on the panel. Hohns has always maintained that it was vital for a group of selectors to exist in order to watch the players that the national coach is not always able to. There has also been an emphasis on judging cricketers in terms of whether they have the character attributes for the long-haul travel demands and rolling schedule of an international career.

Langer is a West Coast Eagles Board director and has been heavily-influenced by the AFL in his thinking. In a football club, the coach is the primary authority in terms of selection. Cricket, however, has long favoured a less centralised model where the selectors and the captain also figure heavily in decision-making. England recently moved to a system whereby their national coach, Chris Silverwood, is the final authority as far as team composition is concerned, abolishing Ed Smith’s selection post.

Most of the building blocks for Australia’s era of greatness had already been put in place when Hohns joined the panel soon after his retirement in 1991, having, himself, played an understated but important role as a wrist spinner on the 1989 Ashes tour. However, he was central to the managed exits of senior players such as David Boon, Craig McDermott, Mark Taylor, Ian Healy, Mark Waugh and Steve Waugh, in order to make the most of a younger group led by Ricky Ponting. 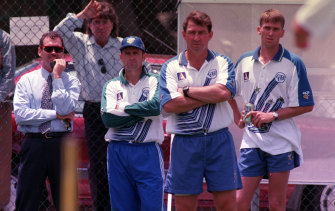 Hohns was a staunch voice in support of Taylor’s leadership during his dire run of outs in 1996 and 1997, flying to South Africa at its height and reassuring the captain of his importance to the team. Taylor regained his touch and remained captain until his retirement two years later. More awkward for Hohns were the decisions to pass the vice-captaincy from Healy to Steve Waugh ahead of the 1997 Ashes series, and then to drop Healy for the emerging Adam Gilchrist in 1999, depriving his former state and national teammate a farewell Test at the Gabba.

In 1999, Hohns’ panel had their recommendation of Shane Warne to replace Taylor as captain vetoed by the ACB’s directors, effectively handing the job to Steve Waugh. Hohns then ushered the replacement of Waugh as ODI captain by Ponting in early 2002. But when Waugh held his ground in the face of private encouragement by Hohns and his panel to retire at the end of the Ashes in 2002-03, the power balance between players and selectors tilted strongly towards the younger men on the field.

After exiting the selection chair following harsh criticism for a narrow Ashes loss in England in 2005, Hohns resumed his life in cricket via a Queensland selection and talent management role. He returned to the national panel in 2014 and then reclaimed the chair after the resignation of Rod Marsh in 2016 at the end of a run of five consecutive Test match defeats.

The finest achievement of Hohns’ final stint was arguably the 2019 World Cup and Ashes tour. Following the traumas of the 2018 Newlands scandal that stemmed in part from the decision to appoint the callow leadership duo of Steven Smith and David Warner in 2015, the Ashes in particular saw a much greater use of data analysis to isolate key metrics, such as the ideal length to bowl in English conditions. Australia’s pace bowlers were managed and rotated according to the nature of each venue, as a squad mentality took hold.

No cricket in Melbourne before Xmas

Is Smith jockeying to replace Paine as Test captain?