Joe Root has demanded his men deliver a performance befitting of an England cricket team as the visitors consider wielding the axe at selection ahead of a do-or-die Boxing Day Test.

After initially indicating a squad would be finalised after training, England’s coach and sole selector Chris Silverwood delayed naming one on Friday night, adding more uncertainty to a campaign that was supposedly four years in the making but has lacked any evidence of planning.

Root had foreshadowed changes would be made, which spells bad news for misfiring batters Rory Burns, Haseeb Hameed and Ollie Pope.

Indicative of the visitors’ woes, they do not have the luxury of replacing them with in-form players. Reserve willow wielders Zak Crawley, Jonny Bairstow and Dan Lawrence average 11, 25 and 27 respectively this year.

The reinforcements will not trouble an Australian attack strengthened by the return of captain and the world’s No.1-ranked bowler Pat Cummins. England had no other options.

Dogged opener Burns has not mentally recovered from the trauma of having his stumps rattled first ball of the series by Mitchell Starc. Armed with an unorthodox technique, Burns plays with a closed bat, leaving him vulnerable to snicks to the cordon while his tendency to walk across his crease has also caused him dramas. 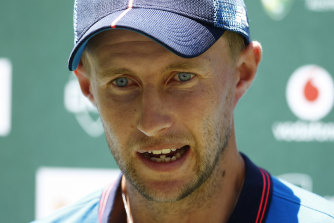 Burns holds superior numbers to his junior opening partner Hameed but an average of 31 after 31 Tests for a 31-year-old is a triple whammy, the record of a middling player with little further scope for improvement. The key number for Haseeb is his age. At 24 he stands to have a longer international future.

Big things were expected of Crawley after he made an epic 267 last year against Pakistan, but the runs have since dried up alarmingly at Test and county level. There is hope Crawley’s extra height will help him negotiate the extra bounce in Australia though he has played his best Test cricket at No.3 and 4 instead of opening.

Pope started the series promisingly but his need to feel bat on ball has triggered his downfall. A crisis meeting earlier this week identified England’s propensity to hit balls they should be leaving. This does not bode well for the out-of-form No.6.

Should Pope be discarded, as expected, he will be replaced by either Bairstow or Lawrence. A World Cup winner, wicketkeeper-batter Bairstow has experience on his side while the younger Lawrence is worth investing in for future Ashes tours.

The replacements have the daunting task of coming in cold and reversing England’s fortunes against an Australia team brimming with confidence.

“It’s asking all of our batters, whoever does play, to do basic things very well,” Root said. “Get yourself in to an innings, give yourself the opportunity to go and make big runs, and build those big partnerships.

“I bang on about that all the time. It’s the fundamentals of batting, being willing to concentrate for a long time, being able to wear bowlers down, take them deep into an innings and make the big scores that put you ahead of the game.”

Echoing the comments then Australia captain Steve Smith made in 2016 after a humiliating innings defeat to South Africa in Hobart, Root called for his batters to adapt faster to the local conditions.

“Look at these two games, it has been a mental thing for us, not through a lack of confidence but understanding the conditions and sniffing the danger,” Root said.

“I think we can be a bit smarter about that. We addressed that at the end of the game. We know we need to be better, and we have full confidence in our own abilities to put that right this week.

“It’s adapting to what is in front of you. It’s a basic thing in the game. With what I said at the end of the game it’s not about pointing fingers. Collectively we have to be better in all aspects of the game, and we weren’t good enough last week.

“We have to be able to front up to that and put in a better performance. I want to see a reaction on this wicket. However the wicket plays we make sure we adapt to it quickly and perform at a level that is of the standard of an English cricket team.”