Despite rain at Carrara reducing the Big Bash game to 17 overs a side and then ending the game early following a second shower, the Thunder remained ahead of their Duckworth-Lewis total to win by seven runs at 2-117 from 12 overs after chasing 172. 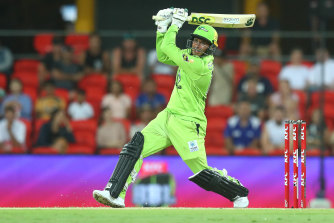 Solid as a rock: Usman Khawaja for the Thunder.Credit:Getty Images

The Thunder went into the first rain delay at 3-99 from 12 overs. Marsh teed off after the restart, posting 87 off 48 balls before being caught in the deep by Chris Green off McAndrew.

Cricket statistician Ric Finlay tweeted Marsh was the second Big Bash player out for 87, which is known as the devil's number in Australian cricket, joining Ben Dunk.

Late wickets prevented the Renegades from posting a bigger total as they made 6-166 from 17 overs, with the Thunder's run-chase extended to 172 under the Duckworth-Lewis system.

Microphones captured Finch telling Perry before the over he would rather have him "go for 20 runs trying to get Hales out than go for eight or 10 runs bowling defensive". 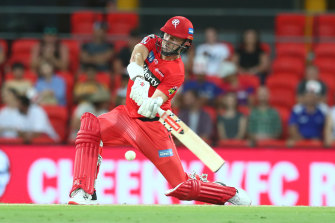 Shaun Marsh in action for the Renegades.Credit:Getty Images

With his sixth ball, Perry over-pitched a wide yorker only for Hales to smash his waist-high full toss to Harvey at point, who dove full length to catch it with two hands.

The wide-eyed smile from Perry showed what his first wicket meant to him. Finch calls Harvey, the nephew of former Australian and Victorian all-rounder Ian Harvey, the "best fielder in the world" and that catch was evidence he may be right.

"It was outrageous, definitely the best catch I've seen off my own batting," Hales told Fox Sports after the game.

Replays appeared to show Perry's front foot may have been over the line, but the umpire didn't call a no-ball and the wicket stood.

Khawaja steered the innings expertly and his side took a boost point 1-69 from eight overs ahead of the adjusted target of 65 runs. He was there at the end when heavy rain forced the players off the field for good.

Thunder teenager leg-spinner Tanveer Sangha took his 10th wicket of the Big Bash and moved into equal-second place in wickets with his first ball of the evening.

The 19-year old rookie didn’t waste time luring Rilee Rossouw into hitting him into the deep, where he was caught by Chris Green.

Thunder star Usman Khawaja raved about Sangha’s poise and ability to spin the ball both directions when asked by Fox Sports during the game.

"He is 19 and he’s bowling beautifully and taking everything in his stride even though he hasn’t really played domestic cricket before this," Khawaja said.

Confusion reigned for both teams as rain threatened during the Renegades' inning with the bat.

Under new rules this season, teams have a power play in the first four overs where fielding restrictions apply and have the option for two further overs later in their innings called the 'power surge'.

The Renegades were concerned they could lose their surge if rain cut their inning short. They also asked if the Thunder would get a power surge if the Renegades missed out.

Melbourne was about to take their surge when the rain struck after 12 overs. When they returned to the shortened 17-over game, they had a one-over surge instead of two.

The Thunder saw their power play remain at four overs and their surge cut to one over.

Is England vs South Africa on TV? Start time, channel and how to watch Women’s World Cup semi-final