After a rough start to his career, blue-blood colt Hard Landing is relishing life as he looks to climb out of the shadows of his famous parents.

The Lindsay Park-trained three-year-old has been to hell and back after he contracted a lower respiratory infection as a juvenile which not only knocked him around but put a line through his Blue Diamond prospects. 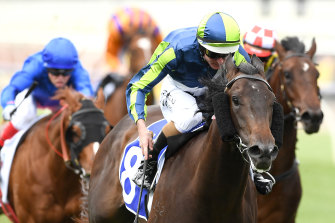 After winning the Maribyrnong Plate on debut, the son of All Too Hard out of group 1-winning sprinter Snitzerland was destined for the elite level.

But when his disappointing run in the Blue Diamond Prelude couldn't be explained on face value, it took a deeper dive to find the underlying issue.

"At first it didn't seem like a lot; we were just treating him like a horse that was a bit off colour, he was on antibiotics," co-trainer Tom Dabernig recalled.

"But it got a bit more deep-seated on the lungs and he had to go under some stronger antibiotics."

Under the care of head vet Dave McKellar and Alex Tremlett, the colt responded well to the treatment and was sent for a long spell at Euroa.

"Generally horses are a lot like children – they're susceptible to getting these coughs and colds and things like that, especially younger horses," Dabernig said.

In Dabernig's opinion however, it might have been the best thing for the boom colt, who has since returned a city winner.

On Saturday, he'll line up again in his own age group in the McKenzie Stakes and will take a power of beating, albeit in a much stronger test than earlier this month.

"In a funny way, these things can be a blessing in disguise because it probably gave the horse the time he needed and now obviously he came back and won first-up," he said.

"He won well, it was a bonus he won at the Valley and we're back there tomorrow. It was a soft five on that occasion and tomorrow the ground will be a bit worse than that, but based on his first-up run I wouldn't be going in there worried.

"If he runs well we've got to make a decision, whether we go to a Danehill – he's a winner down the straight so a Danehill would be tempting – or do we go on a Guineas path and try and stretch him out. That's the unknown at the minute but we'll reassess it after Saturday.

"He's got an amazing pedigree. Obviously mum Snitzerland was an amazing racehorse and what level he'll get to, he's so lightly raced so I'm not sure.

"He's been bought with all the better races in mind and we'll just take it one run at a time and if he keeps running well we'll put him in the deep end and if not we'll go a more conservative path."