The fourth edition of the rich $10 million Golden Eagle – worth more than the $7.75 million Melbourne Cup – will be run at Rosehill on Saturday, 25 minutes after the time-honoured Victoria Derby is run and won at Flemington, with the two meetings split on two separate mainstream free-to-air television stations. 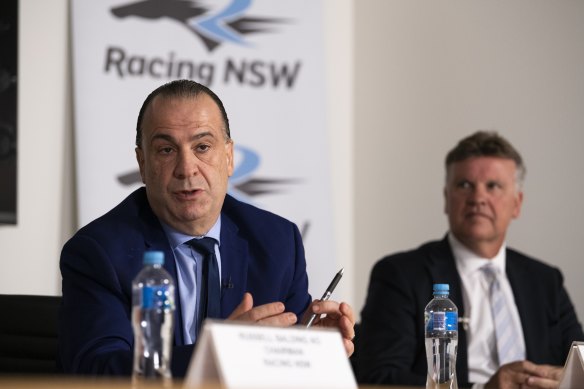 Racing NSW chief executive Peter V’landys says he had no option but to encroach on Melbourne’s spring carnival.Credit:Rhett Wyman

The Golden Eagle, restricted to four-year-old horses and run over 1500 metres, is one of a number of races introduced by Racing NSW over the past five years in an effort to bolster their spring program and leverage Melbourne’s successful carnival.

Those innovations also include the $15 million Everest run on Caulfield Cup day, which has been an undisputed success, and the $2 million Big Dance, which will be run for the first time at Randwick on Tuesday’s Melbourne Cup Day.

But Victorian racing officials have become less interested in the state versus state war this spring, and are embracing the healthy competition coming from Sydney, even if it means their poster girl Jamie Kah is riding in the lucrative Golden Eagle instead of the first day of the Flemington carnival, alongside champion Italian jockey Frankie Dettori.

On the flip side, Sydney’s premier rider James McDonald is fully committed to riding at Flemington over Cup week, while Godolphin’s fly-in jockey William Buick is also in Melbourne to add an international flavour to the jockeys room.

“At grand finals you want the best in your sport, whether it be the horses or the jockeys, so that’s not perfect, but the big picture is pretty good,” Victoria Racing Club chairman Neil Wilson told The Age.

“Over time, I think that’ll work its way through, but if we start spending all our time trying to unravel that, we’re going to miss the opportunity to grow our sport. 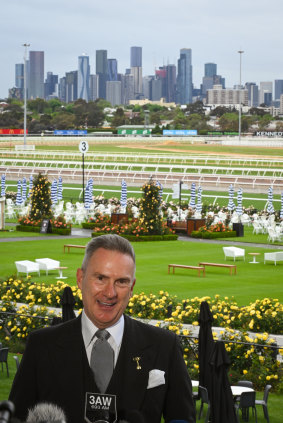 VRC chairman Neil Wilson during a press conference ahead of Derby Day.Credit:Getty Images

“Of course, would we like to work [with V’landys] on pathways and patterns and things? Absolutely, but there’s a bigger reap involved in that. We have our views on that, and we’ll have our input on that, but what’s completely in our control is putting on the best carnival we can.”

Even though the fields for Victoria’s sprint races have been weakened by the introduction of The Everest, V’landys said competition has brought the best out of both jurisdictions, pointing to the VRC’s revamped Champion Stakes Day, which is on track to provide Cup week with a thrilling climax. The club decided to move its feature mile handicap from Derby Day to Stakes Day this year, and rebrand the races as weight-for-age title fights.

“I believe the competition lifts everyone and I think the VRC’s last day of the carnival’s Championships concept is excellent,” V’landys said.

“I compliment them on it. That’s what competition brings, it brings people to achieve better results.

“And the turnover has gone up, it hasn’t gone down. Having the Everest and Caulfield Cup on the same day has grown the day’s wagering turnover. The Caulfield Cup hasn’t lost any turnover…in fact it’s grown it to much higher rates than it was growing.”

Wilson said the jury was still out whether the Golden Eagle had helped or hindered Victorian wagering income on Derby day, but interest in the sport had certainly grown over the past five years.

“What we see is a lot more people interested in racing and we think that, in the medium to long term, is a great thing,” Wilson said.

“People will want to be at the best races, they’ll want to be enjoying the best carnivals, and if we focus on our job and what we’re doing, more people will be here, I think.”

V’landys said before the first Everest in 2017, Sydney racing had struggled to capture an audience, and he had no option but to try and bolster the NSW program with more marquee events.

“What was happening was customers were migrating to Victoria because NSW had no major events, and it was taking forever for them to come back,” he said.

“For the viability of the NSW racing industry, and the growth of it, it’s important to have a very good spring carnival.

“The Everest has been a game-changer in NSW because it’s enabled us to have a 12-month growth in revenue. Everyone looks at it like it’s just spring, but it’s not just spring because those customers stay for 12 months, they don’t just stay for two months.”

Over the past four years, the Golden Eagle has quickly raced to the second-most wagered race in Sydney, surpassing long-established features like the Golden Slipper and the Queen Elizabeth Stakes.

“It shows you the growth of the race. I think it’s only been going for four years, so to take over the more traditional races as the [second] most wagered NSW race speaks for itself,” V’landys said.

Despite this, some racing fans are still uncomfortable with the fact the sport’s best horses and jockeys are split among states.

International form expert Francesca Cumani, an adopted Australian who will head Ten’s Cup week coverage alongside Eddie McGuire, said she couldn’t wrap her head around the idea that racing’s best would be split across Australia’s two biggest cities.

“Part of me thinks competition is a good thing, and with raising prizemoney levels for trainers and owners et cetera, it’s really good for them.

“But it’s a long year, it’s a big country, and there’s spring and autumn, and do we really need to be taking each other head on at the same time of year?