Constitution Hill looks like heading straight to Cheltenham for the Champion Hurdle after another bloodless win in the Grade One Christmas Hurdle at Kempton.

It is easy to underplay his fifth hurdle win from as many starts at odds of 1-7, but a reminder that the 17-length runner-up, his Nicky Henderson-trained stablemate Epatante, was runner-up in last season’s Champion Hurdle puts his run into perspective.

Henderson said: ‘I have seldom seen Epatante better at home and Aidan (Coleman) said she has probably run as well as she did last year when she won the race on the bridle. But Aidan said he was chasing shadows. It shows you what Constitution Hill is achieving. It’s frightening.’ 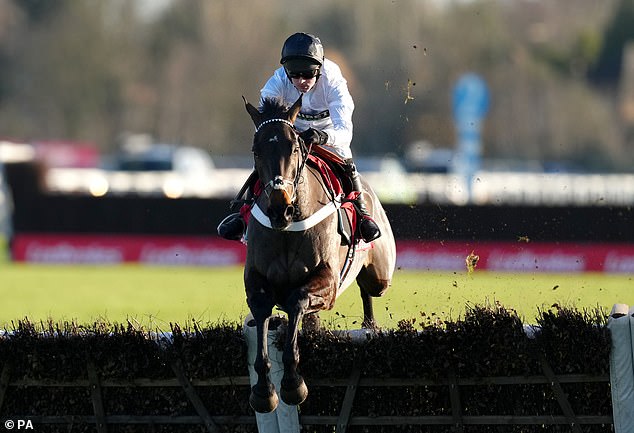 Dual Champion Hurdler Honeysuckle is 8-1 after suffering the first defeat of her career in the Hatton’s Grace Hurdle at Fairyhouse. They are split by State Man (4-1), who runs in the Matheson Hurdle at Leopardstown on Thursday.

Paisley Park turns 11 on New Year’s Day and most would have thought the career of the Emma Lavelle-trained winner of the Stayers’ Hurdle at the 2019 Cheltenham Festival would be on the downward slope now.

But a four-and-a-quarter length win in the Long Walk Hurdle from Goshen, with old rival Champ a further half-length back in third, showed that verdict is premature.

Barry Fenton, husband and assistant trainer to Lavelle, said: ‘He seems to have got his old sparkle back and I could see it even when I was saddling him.’

That verdict makes Coleman’s mount a contender again for the Stayers’ Hurdle in March, given he was third to Flooring Porter in the last two runnings of the race. He is a 14-1 shot to regain his crown.

Paisley Park has frequently crossed swords with Philip Hobbs-trained Thyme Hill over hurdles and the way the latter jumped at Newbury on his last run made it look like his switch to novice chasing was a bad idea.

But fitted with cheekpieces for the first time, the performance of Tom O’Brien’s mount was transformed in the Kauto Star Novices’ Chase. He jumped with precision and comprehensively reversed form with McFabulous.

Limited tickets for Royal Ascot to go on sale on Friday