A coronavirus scare has swept through Flemington as the spring racing carnival begins to hit top gear, with a staff member from the stables of the Gai Waterhouse and Adrian Bott training partnership sent home from work for tests on Monday. 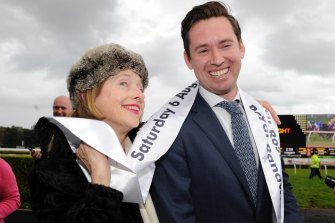 Just eight weeks out from the Melbourne Cup, officials of the Victoria Racing Club, trainers, jockeys and employees of the other stables at Victorian racing's headquarters are on tenterhooks, desperately crossing their fingers that the Waterhouse employee returns a negative result.

VRC officials told Flemington trainers on Monday that a staff member at champion Sydney trainer Waterhouse's Melbourne base had been feeling unwell and left work to have a COVID-19 test, forcing the stable to shut down.

"On advice from the CMO [chief medical officer] the stable has been placed into lockdown until we receive the result tomorrow," an email warning other Flemington-based trainers said.

As a result Waterhouse and Bott's horses cannot be worked at the course or use the facilities there until the result of the test comes back.

However, staff employed by the pair are allowed to visit the stables to feed and look after the animals.

"The horses will be cared for by the staff but will not access the track tomorrow or the community walker," the email said.

"The community walker will be shut down and deep-cleaned this afternoon and not operational until we receive the test result."

Leigh Jordon of the VRC said that the action was being taken as a precaution and other trainers would be allowed to work their horses on Tuesday.

Racing has continued with barely a hiccup throughout the pandemic, with strict biosecurity measures being put in place at training centres and on racecourses, where precautions have been taken for the past six months while the sport has pushed forward without crowds.

Two apprentice jockeys were suspended for short periods for COVID-19 breaches while the training centre at Cranbourne was closed briefly after a coronavirus scare there in August. Seven stables were briefly put into lockdown before they were given the all-clear to resume after a short break when tests of staff who feared they may have been infected came back negative.

Waterhouse is the biggest name in Australian racing. The daughter of legendary Sydney trainer Tommy Smith has been at the top of the tree since gaining her own training licence in 1992 and has won almost every big race in the country, including the Melbourne Cup in 2013 with Fiorente.