The International Cricket Council is investigating allegations Indian players Jasprit Bumrah and Mohammed Siraj were subjected to highly offensive abuse by crowd members at the SCG following a complaint made at the close of play on Saturday.

The news comes as the status of the fourth Test at the Gabba remains in doubt, with the Board of Control for Cricket in India still to confirm the Indian team will travel to Brisbane after the third match of the series wraps up in Sydney. 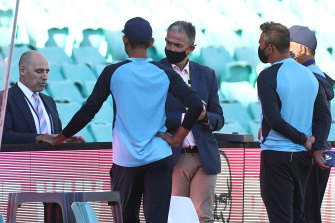 Cricket Australia CEO Nick Hockley and head of integrity Sean Carroll with members of the India tour party at the close of play.Credit:Getty

The alleged taunting of Indian players was an ugly end to a third day of the match in which Australia assumed a commanding position in their quest to go 2-1 up with a game to play.

It was also the latest flashpoint of a series that has had no shortage of drama associated with it.

There is still uncertainty about where it will conclude, the Indians having been grumbling behind the scenes for a week about tighter restrictions on their movements in Brisbane.

While the Australian and Indian teams are due to travel north on a chartered flight on Tuesday, CA executives may not feel comfortable until the plane is off the tarmac.

While CA sources say senior office bearers at the BCCI have expressed support for heading to Brisbane after being reassured players would be let out of their hotel rooms and be able to mingle with teammates, there have been reports all throughout the week of Indian unwillingness to go to the Gabba.

The fact Brisbane has been forced into a three-day lockdown because of the discovery of a quarantine hotel cleaner with the contagious UK strain of the virus may not help the situation.

Overseas jockeys allowed to ride on Group One racedays in Ireland