For the latest Australian communities subjected to a public health order, a consolation of lockdown was the prospect of some unencumbered evenings of Test cricket. A captive audience in no hurry to go anywhere: this was why pink-ball Test matches were invented.

Instead, the isolation diary went something like this. Put the kettle on for an afternoon pot of tea. Come back to see replays of Jasprit Bumrah’s resolute forward defence popping a return catch to Patrick Cummins. 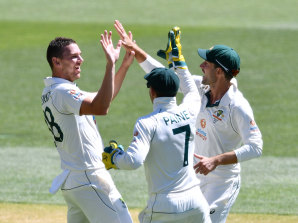 What a spell: Josh Hazlewood (left) celebrates the dismissal of Ravi Ashwin.Credit:Getty

A lag of 20 or so minutes follow, when the realities of lockdown set in. What a Christmas this is going to be. You make a phone call to your mother. By the time that’s done, Hazlewood has claimed three more wickets in four balls and, to add injury to insult, Cummins looks like he might have broken Mohammed Shami’s right arm.

So much for Sunday and Monday being covered; this match didn’t even get to full darkness on Saturday. Now what?

If anyone owes the audience an apology, it is probably the Indians. Aspects of their cricket on Thursday and Friday were so sloppy as to suggest that of the eight billion people who have been warned against the dangers of complacency, the Indian cricket team had not received the memo.

Until Saturday, they were good enough to get away with it. Friday night had ended with Kohli, Pujara and Bumrah sharing laughs about the nightwatchman’s inelegant survival to stumps. The new ball under lights had been repelled, and everyone was very pleased with themselves.

Eventually, complacency not only caught up with Kohli’s team but took them aside for some rough treatment. The Indian cricket-loving population, who have needed more respite than most, will understandably see these events as a crisis and a come-uppance, a failure of their cricketers to provide an example of resilience. This is understandable. If Australia had been bowled out for their lowest-ever score, the national focus would be on the batting catastrophe.

To be fair, though, if anyone has to apologise for cutting short the entertainment it was Cummins and Hazlewood, whose bowling was of the highest imaginable quality. The Indian batsmen did not throw their wickets away. They pushed forward in a correct manner, ball after ball, and were defeated by the very basic art of pitching the ball up and making an accomplice of the conditions. It was one of those days when the pitch was conducive to the ball deviating a precise half-bat’s width, Goldilocks conditions, just enough to catch the edge but not too much. The Australian pace pair were at their supreme best.

We have seen this simple elemental beauty before. Dale Steyn and Vernon Philander at Cape Town in 2011, removing nine Australians in 11 overs. Stuart Broad at Trent Bridge in 2015, eight wickets in nine overs. Just last year, Hazelwood and Cummins, with James Pattinson, rolled through England inside a session at Headingley.

On each occasion, the astonishment only seemed to sink in after it had happened. At the time, it has a kind of procedural banality, as matter-of-fact as making cups of tea and phone calls. Not for nothing do coaches and players prattle on about putting the ball in the right areas and hitting the top of off stump. Not for nothing did Glenn McGrath have the simplest bowling philosophy. So easily said, it is only rarely done with such unerring precision as this. It was unbelievable yet somehow plainly inevitable, the practice of economy as a work of art.

Cummins and Hazlewood are making a habit of it. Both passed career milestones, Cummins taking his 150th Test wicket and Hazlewood his 200th, each in quick time. Game by game they are accelerating into the highest rank and living up to the expectations they have carried. All the credit goes to them. They might have wrecked the lockdown, but they can save their apologies for another day.

Who were the hardest batsmen to plan for? Ask Nasser and Bumble