Two of Pat Cummins’ closest confidants, Sydney Sixers duo Moises Henriques and Jordan Silk, believe Australian vice-captain Steve Smith – and potentially other senior players – should play a key role in deciding who bowls at what times during the Ashes because of the new captain’s willingness to accept feedback.

Henriques has also encouraged Cummins to not be afraid of fielding at fine leg for certain periods during long spells, even if some commentators might dispute the merit of doing so. 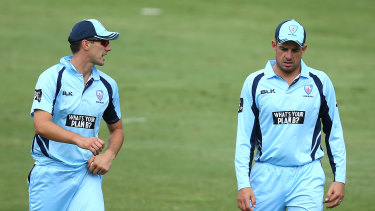 Pat Cummins and Moises Henriques have a chat during a NSW one-day match against Victoria in February. Credit:Getty Images

The appointment of Cummins last week as Australia’s first fast bowling captain since Ray Lindwall – who only did the job for one Test – in 1956 has ignited debate over how he will manage bowling rotations against England.

Cummins, the No.1 ranked Test bowler in the world, could open himself up to criticism by either bowling himself too much, or not enough.

Henriques, who will lead the Sixers in their first Big Bash match on Sunday against the Melbourne Stars at the SCG, observed Cummins as NSW skipper earlier this year in a handful of one-day matches that Smith also played.

“He’s shown me he listens to people’s feedback when he’s been captain,” Henriques, an experienced NSW captain, told the Herald at Monday’s Big Bash launch. “There were times when someone may have walked up to him during a one-day game and said ‘we think you need to bowl right now’ and he’d go ‘OK’ and just bowl. 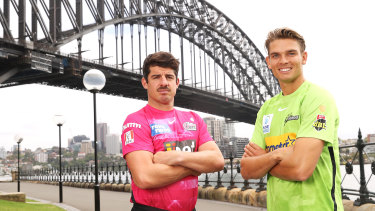 Silk, a childhood friend of Cummins stretching back to their Penrith Cricket Club days, said the juggling act would be his biggest challenge early on but felt Smith would be an influential figure when it came to knowing when to continue or stop bowling.

“Tactically he’s going to have to lean on Steve Smith,” Silk, who has captained Tasmania this year, said. “Their communication is going to have to be crucial. I know the type of guy he is, he will probably prefer someone else [get the chance to bowl] rather than himself to get the job done. That’s where it falls back on Steve Smith to be that tactical player in that team and relationship to demand that Pat keeps bowling.”

Where Cummins fields will be a subject of debate too. With Smith normally close to the action in the slips, Henriques says there is no reason why Cummins can’t grab a drink for a few overs down at fine leg, even if he may be criticised for it by those analysing his every decision at the Gabba for the first Test beginning December 8. 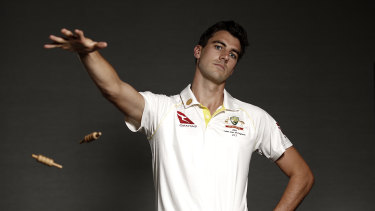 “The commentators will make a bigger deal of when he’s fielding at fine leg than what it actually is,” Henriques said. “In Test cricket if he drops down to fine leg to get an over, that is not an issue. If a team can’t run themselves for six balls, they shouldn’t be playing cricket for Australia. Spending two hours down there is a different story.

“It also gives him space to separate and become a bit detached from everything down there for a couple of minutes to get his mind back into the game. I’d be surprised if he didn’t use that tactic on purpose just to give himself a break as a bowler-captain. He will need that. You do get a bit emotional sometimes when you bowl and straight after bowling you might not be thinking as clear as you should. I would actually advise if he’s feeling that to go and have a spell at fine leg and have a drink and get your mind clear.”

Another Big Bash star who has played alongside Cummins, Sydney Thunder off-spinner Chris Green, said he liked a piece of captaincy advice given to him by Mike Hussey.

“He said ‘when you’re batting or bowling in that moment, put your captaincy hat down for a second so you can focus on your skill’,” Green said. “We could still see the best of Pat Cummins under his captaincy with the ball.

“I’m really impressed with the way he’s asked for Steve to be his vice-captain to help him. The biggest thing as a bowling captain I’ve found in the past is to just find someone there who can just help you out to allow you to bowl.”

Green’s Sydney Thunder team will begin their Big Bash campaign against the Brisbane Heat on December 6 in Canberra.