Pat Cummins admits Australia are playing an ever more difficult balancing act on their Sri Lankan tour after Ashton Agar and Marcus Stoinis became the latest players to suffer injuries.

Both suffered side strains during Australia’s high-scoring victory in the first of five one-day internationals in Kandy on Wednesday morning (AEST). Six bowlers or all-rounders have gone down over the past 10 days.

There are fears that Cummins and fellow pace spearhead Josh Hazlewood, in particular, may be forced to play more one-day games than planned during the crammed 11-day ODI schedule, before heading into two Tests without a red-ball warm-up match.

“We’ll try our best not for that to happen,” Cummins said on Wednesday from Sri Lanka. “The planning was going to be for perfect preparation.

“We have the Aussie A team over here with a big squad. There’s always going to be some things that crop up, so it’s not ideal with the amount of injuries that have happened, but we’ll strike that balance.

“The Test matches are certainly front of mind even in this [one-day] series, so I don’t think much will change from what I’m going to do this series.” 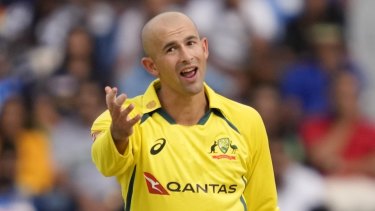 Ashton Agar took two wickets for Australia but could be the latest addition to a burgeoning injury ward.Credit:AP

Stoinis has been ruled out of the tour, joining Sean Abbott (broken finger) and Kane Richardson (hamstring tendon), already sent home. Mitchell Starc (cut finger) and Mitch Marsh (strained calf) have been ruled out for at least the first three one-day matches.

Agar will remain with the squad to continue rehabilitation and ongoing assessment before the two-Test series.

Head and Kuhnemann have been playing in the Australia A four-day tour match against Sri Lanka in Hambantota but were granted permission to leave.

They will be replaced for the final two days of the A game by Jimmy Pierson and Tanveer Sangha.

Scott Boland joined the ODI squad on Tuesday and is available for selection.

The second match of the series will be played in Kandy on Thursday night.

Cummins was unsure when Starc would be fit enough to bowl again in a match after suffering a freak injury slashing his left index finger on a boot spike following through during the first Twenty 20 international.

“He’s a bit of a wait and see,” Cummins said. “He had a bowl the other day. I think the plan was getting stitches out in the next day or two.

“There’s no timeline on that. A good result would be to have him play some of this [one-day] series.”

All-rounder Cameron Green is also still not bowling after a slow preparation.

Agar was the pick of the bowlers in the first one-day match, claiming 2-49 from his 10 overs in a game in which Sri Lanka made 7-300. A brilliant 80 not out by Glenn Maxwell from 51 balls carried Australia to victory.