Ruthlessness with a smile: That’s the working title of the mantra for new Australian captain Pat Cummins as he lays down his cultural benchmarks ahead of the first Ashes Test at the Gabba.

In so many ways, Cummins will be learning on the job when he leads the team onto the field in Brisbane on Wednesday. From field placements for Nathan Lyon to the nuts and bolts of DRS referrals to trying to fit in a bowling warm-up around the toss and pre-game interviews, there are loose ends that must be tied on the run.

What he is clear about is the spirit in which the Australians will approach the contest and the manner in which they interact with England, who in turn have already suggested a line in the sand be drawn when it comes to hefty matters like the racism scandal in Yorkshire or Tim Paine’s sexting saga.

Cummins is wordly enough to understand there will be moments throughout an intense five-Test summer where tempers fray and words are exchanged. He also knows that aspect of competition will be as closely scrutinised as runs and wickets given Australia is still climbing out of the sandpaper scandal era.

He said he hadn’t felt the need to address the team in a formal manner but never went onto a cricket field looking to initiate a confrontation of any sort. He encourages his teammates to follow suit.

“It’s something I don’t think I’ll be intervening in first up, until I see a problem. I want to make sure everyone is themselves and does what they do best, they don’t get caught up in too much unneeded fighting,” Cummins said. 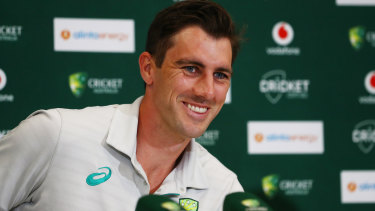 Relaxed … Pat Cummins on the eve of his first Test as Australian captain.Credit:Getty

“I don’t think you need to go out looking to pick fights. I’m a big believer in concentrating on your own game and making sure that’s in order and not getting too caught up in what the opposition is doing.

“I’ll be sticking to that, I’ll be encouraging teammates to do that. It’s Test cricket, there are going to be some heated moments. We’ll keep everyone in check. The last few years has put everyone on notice, you won’t see too many people getting out of line.”

Former skipper Tim Paine was central to the Australian renaissance but even he fell off the wagon against India last summer, when stump mics caught him unleashing a petulant rant towards Indian spinner Ravichandran Ashwin.

“At least my teammates like me, d—head,” Paine said at the SCG in January. “I’ve got a lot more Indian friends than you do. Even your teammates think you’re a goose. Don’t they. Every one.”

But Cummins has leaned heavily on Paine over the past week, ringing him for advice on all manner of captaincy issues. He said he would speak to him again the night before the Test as he tries to soak up as much advice as possible.

“It’s been good to chat. He obviously wishes he was up here and part of it all,” Cummins said. “We’ve had some good chats, I’ll probably give him another call this arvo and keep leaning on him for different ideas on how to work with the players. Great guy, I’ll keep learning off him.”

There will be other strands for Cummins to weave into the overall picture; He enjoyed the relaxed atmosphere set by Aaron Finch in the shorter formats and remembered how Steve Waugh, who shadowed the side in the last series, helped stress simplicity through a fog of data and metrics. Michael Clarke made him feel 10-feet tall and bulletproof when he bowled.

The enormity of the past fortnight and his elevated position in the national sporting pantheon has yet to completely dawn on Cummins, who insists he has been a sea of serenity behind closed doors.

“It didn’t [really hit me] until the launch a couple of days ago, walking out onto the Gabba for the first time. And even here today, the little things like doing the captain’s press conference and chatting to the umpires.

“It will really hit home tomorrow when I walk out there and do the toss. It’s been a great lead in, I know there has been a lot of publicity and noise but inside the camp we’re really relaxed.”

His opposite number, Joe Root, is vastly more experienced with 56 Tests to his name as England skipper. Yet he speaks like a man with the weight of the world on his shoulders, acknowledging this will be his defining series as captain and clear in his role as England’s leading hope with the bat.

Off the field, he has been caught up in the Yorkshire racism investigation, while Ian Chappell and Michael Vaughan are among former players either criticising his captaincy or pouring on the pressure to defy an Australian side that is a hot favourite to retain the urn.

All of that hasn’t gone unnoticed by England wicketkeeper Jos Buttler, who said on Wednesday the team cannot leave him out on a limb throughout the summer, nor did he believe Root needed to put so much pressure on himself in terms of a “defining” series as leader.

“It’s a massive series for him. Of course, he feels like it’s a defining series. In my eyes, I can’t say it would be over such a long period of a great career,” Buttler said.

“But it’s a massive moment, isn’t it, as an Englishman to come here and captain a side in Australia. We’re determined to help share that load that is on him, it’s a full-squad effort.”