A disappointed Denis Pagan says he won’t press on to the Melbourne Cup with Johnny Get Angry after his Derby winner failed to perform in the Geelong Cup.

The winner, Tralee Rose, was already guaranteed a start in next month’s 3200-metre classic, but solidified her credentials with a tough win over Dr Drill, with Hasta La War running third. 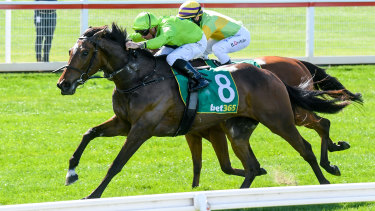 But Pagan’s four-year-old gelding Johnny Get Angry was unable to make an impression, and the two-time AFL premiership coach told The Age he wouldn’t send the horse to Flemington.

“He had the run of the race,” Pagan said, adding that he hasn’t been able to find any excuse with the horse in the lead-up to Wednesday’s race.

Johnny Get Angry was also guaranteed a start in the Melbourne Cup after his fairytale win in last year’s Derby, but Pagan told The Age in the lead-up to the Geelong Cup that his final start would define whether he warranted a berth.

Tralee Rose will face scrutiny from Racing Victoria’s chief handicapper Greg Carpenter on Thursday but isn’t likely to receive any more than half a kilo for her win at Geelong. Her Warrnambool trainer Symon Wilde said it was a dream to have a Melbourne Cup contender, and one in form.

“From a Melbourne Cup point of view, it was very pleasing,” he said.

“She did look a touch dour in The Bart Cummings, and again today, but I think that it’s positive going forward.

“All the work is done. We were grappling whether to run or not, and I’m glad we did. It will top her off beautifully. It’s not like she’s falling in, she’s getting stronger as the races go on late. She had the other horses’ measure, I think.”

Wilde said all roads now point to the race that stops a nation. 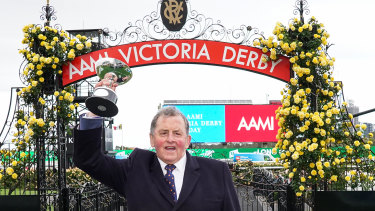 “It is dawning on us now that we’ve got a genuine live hope in the Melbourne Cup,” he said.

“She’s a horse that we found in New Zealand – a yearling.

“You look at them and think ‘can this be the one?’

“She had her first start here at Geelong and to be coming back a bit over 12 months and win the Geelong Cup and being a live hope in the Melbourne Cup, if we can get her there in the one piece, it’s what you dream of.”

Those who finished behind Tralee Rose and are yet to claim their spot in the Melbourne Cup have one final opportunity to do so, via the Hotham Handicap on Derby day.

Geelong Cup runner-up Dr Drill is not in the Melbourne Cup picture, however Hasta La War, who finished third, was 41st in the order of entry on Wednesday afternoon.

Tony Noonan, representing trainer Tony Pike, said it was a thrill to help prepare the Tavistock gelding for the assignment.

“I’ve been good mates with Tony [Pike] and known his family for more than 30 years,” Noonan said.

“I was honoured for him to ring me but I’ve been under a bit of pressure, we haven’t been firing a shot.

“He’s a good trainer. He just knew what he wanted to do with this horse, and he’s upped the ante, and he’s got him spot on.

“Tony thought that, from that gate, it would be best getting some cover and Damian [Lane] gave him a lovely ride, and he got a lovely track into the race and hit the line impressively.

“He’s a lovely big horse, and he relaxed beautifully today, so he’s heading in the right direction [to the Derby].”