Women's Big Bash League cricketers have been warned about the pitfalls of social media in a detailed document outlining life in the team village at Sydney Olympic Park, as rain again marred the start of the new season.

Amid strict bio-secure protocols, the 45-page hub operations plan outlined to players of the eight teams includes details on the food they are allowed to take while on their way to training and matches, alcohol restrictions and even how team meetings should be conducted in cramped dressing rooms. Themed dinner nights, such as birthdays, are allowed but team hotels can only provide cupcakes at $4 a pop, because of bio-security issues. 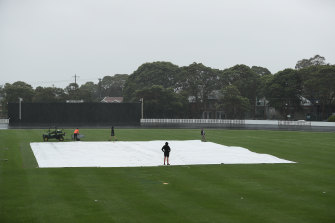 Covers on the field as rain forces delays. Credit:Getty Images

At a time when sports are particularly mindful of their image when many fans are in lockdown, the cricketers have been reminded to only post on social media in small groups "always observing room capacity numbers" and told to keep their distance.

"Are you doing an activity that requires a face mask or other PPE? Are you in an area that is permitted under hub life? We understand life in the hub is different, are you sharing a good news story? Could the post raise questions as to whether you are following CA directions around hub life, training requirements and match day?"

There will also be change in the way team meetings are conducted at the Sydney venues because of the need for the one person per four square metre ruling.

The Renegades clash against the Brisbane Heat at Hurstville Oval was abandoned without a ball even being bowled.

Royal Ascot day one tips: Life will be a Beach for Battaash backers in King's Stand