Lightly raced Scone three-year-old Demitasse should justify his $2.80 favouritism on TAB when he steps out for just his fourth start at Tamworth on Tuesday.

A son of Irish-bred stallion Shalaa who was Europe’s dominant sprinting two-year-old star, Demitasse has shown immense talent culminating in his impressive last-start win at Muswellbrook. 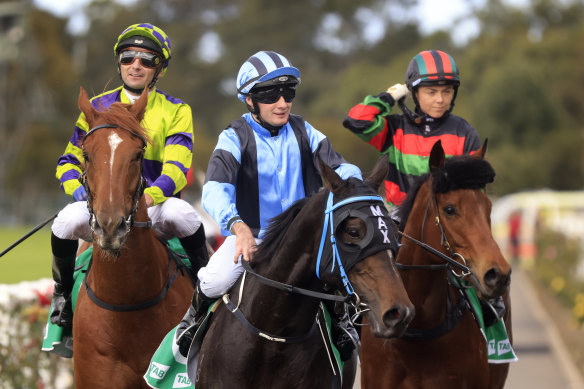 Racing returns to Tamworth on Tuesday.Credit:Getty

The gelding was near the tail of the field entering the home straight but once he was into the open, Demitasse sprinted powerfully and stormed to the lead, winning with ease.

Experienced South African jockey Donovan Dillon was aboard Demitasse and he retains the ride in Tuesday afternoon’s final event.

In the penultimate race, Grant Buckley should cap off a good day when he partners Arliebel ($4.40) who will be attempting to claim a winning hat-trick.

The mare has steamed home over the top of her rivals at Armidale and Quirindi and will again be a force to be reckoned with at Tamworth.

Buckley has six mounts on the eight-race program and many have excellent prospects including Barellan Bandit ($5), Hammoon Thunder ($7.50) and I Am Dutch ($19).

Barellan Bandit went home strongly when fourth to Hyland Bay in the Gurya Cup at Armidale last start and the additional 200m will be much more suitable to the six-year-old.

Scone trainer Paul Messara is likely to bookend the program with winners in the opener and the final race with Demitasse.

Messara also prepares Unzaga who is the short $1.65 favourite in the first race over 2100m.

The flashy chestnut drops significantly in grade after finishing tenth to Knife’s Edge in a TAB Highway at Newcastle and will have the services of Aaron Bullock.

Unzaga has only raced eight times for a win and four placings and appears to have a class edge on his rivals.

Second favourite King Qin ($4.40) has raced 18 times and is yet to post his first victory. Topweight Bartender Blues has raced on 31 occasions for a lone win.