Just when it appeared England were suffering from a severe bout of Departure Lounge Syndrome to go with the lingering COVID crisis, they staged a stirring fightback on the opening day of the fourth Ashes Test in Sydney.

Late wickets to the ageless Jimmy Anderson and unsettling Mark Wood left the match evenly poised with Australia 3-126 as yet another shower of rain brought an early stumps on Wednesday.

Stuart Broad dismisses David Warner on day one of the SCG Test.Credit:Channel Seven

The stage is now set for Steve Smith (6 not out) and Usman Khawaja (4 not out) to make triumphant homecomings when they resume on Thursday.

Smith has made just one century since his prolific return from suspension on the 2019 Ashes tour, 131 at the SCG against India a year ago.

And Khawaja, who made his Test debut at the ground as a NSW player before moving to Queensland, is playing his first Test since being dropped on that 2019 tour as a replacement for the COVID-19 stranded Travis Head.

During the previous Ashes Test at the SCG four years ago, he scored 171.

Stuart Broad may have claimed David Warner’s wicket for the 13th time but it threatened to be a consolation prize through the first two rain-marred sessions.

Warner made 30 before attempting one too many drives with a ball not quite full enough, nicking off to Zak Crawley at second slip in helpful bowling conditions.

But the Australians had already added 51 and, like in the Boxing Day Test, Warner’s increasingly comfortable opening partner Marcus Harris was threatening to press on again.

Harris and Marnus Labuschagne eased the score to 1-111 largely untroubled before 39-year-old Jimmy Anderson produced what may prove to be the ball of the match.

Playing his 169th Test, second only to Sachin Tendulkar’s 200 on the evergreen list, Anderson produced a delivery which lifted and darted away from the left-handed Harris, catching the edge and flying to Joe Root at first slip. 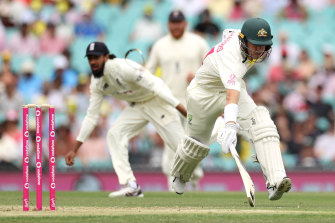 Harris’s circumspect 38 came after a match high 76 during the third Test, more than England made in its entire second innings, as Australia won in little more than two days to go 3-0 up and regain the Ashes.

In the next over, Labuschagne (28) nicked off to Wood for the second time in as many Tests to a ball he may well have left but for its genuine pace leaving no time for contemplation.

The celebration by England players that followed did not look like a hangdog rabble desperate to catch the next plane out of Sydney to the UK, but a team buoyed by the rare opportunity to make a contest.

If only Broad, Anderson and Wood had all played the first Test in helpful conditions at the Gabba how may this Ashes have panned out? Instead, Broad and Anderson were rested following a lack of preparation.

Warner’s series-defining first innings scores of 94 at Brisbane’s Gabba and 95 at the Adelaide Oval were followed by 38 in Melbourne.

Batting has not been easy in this series and so it proved early yesterday as captain Pat Cummins won the toss and sent his openers in on a green-tinged pitch with high humidity.

History suggested bat first in Sydney because the pitch will flatten out, but there was plenty in it for the bowlers.

Broad, 35, claimed Warner, 35, seven times on the difficult 2019 Ashes as the dynamic left-hander managed just 95 runs for the whole series but this time it’s been different.

Broad played just one of the first three Tests this summer and is not happy about it, as he made clear in his Sunday Mail newspaper column.

“As a wobble-seam bowler, I feel as though I missed out on two of the best wobble-seam pitches in Australia (Brisbane and Melbourne). Only playing once has made this a very disappointing trip, one that has not met my personal expectations.

“The biggest frustration is losing the Ashes, being 3-0 down and feeling like I’ve not really done anything. Not being able, as an experienced player, to influence a series while it’s live is tough.”

The Warner-Broad bout is just about over. They are most unlikely to play another Ashes series against each other.

But for now at least Broad and England are right in the contest.