England routed India for 78 all out as they marked the second anniversary of Ben Stokes’ Ashes miracle with another sensational display at Headingley.

While Stokes completed an unimaginable fightback against Australia at the same ground on August 25, 2019, this time it was the home side making all the running as they scattered the tourists’ batting line-up to the Yorkshire wind.

Just nine days on from a demoralising defeat at Lord’s, Joe Root’s men roared back in memorable fashion as a four-pronged seam attack of James Anderson Ollie Robinson Craig Overton and Sam Curran hunted in a pack.

India, having chosen to bat first, were wiped out in just over 40 overs having surrendered their last six wickets for 30 in the afternoon session. England’s initial response was a good one, with Haseeb Hameed and Rory Burns reaching 21 without loss from seven overs.

Anderson set the train in motion, taking three for six in a dynamic new-ball burst that proved too good for KL Rahul, Cheteshwar Pujara and captain Virat Kohli, and he was not even needed for a second spell.

Robinson took the next two, before the recalled Overton and Curran took over to blow away the lower order. Both men found themselves on hat-tricks as India lost four wickets in the space of six balls, while wicketkeeper Jos Buttler helped himself to five catches in the innings.

There was a suspicion that England were quietly pleased when India invited them to field first, given Headingley’s reputation as a risky venue. Anderson certainly knows how things are done in this part of the world – with 42 wickets at 25.33 in his previous 11 appearances – and he wasted no time getting involved. 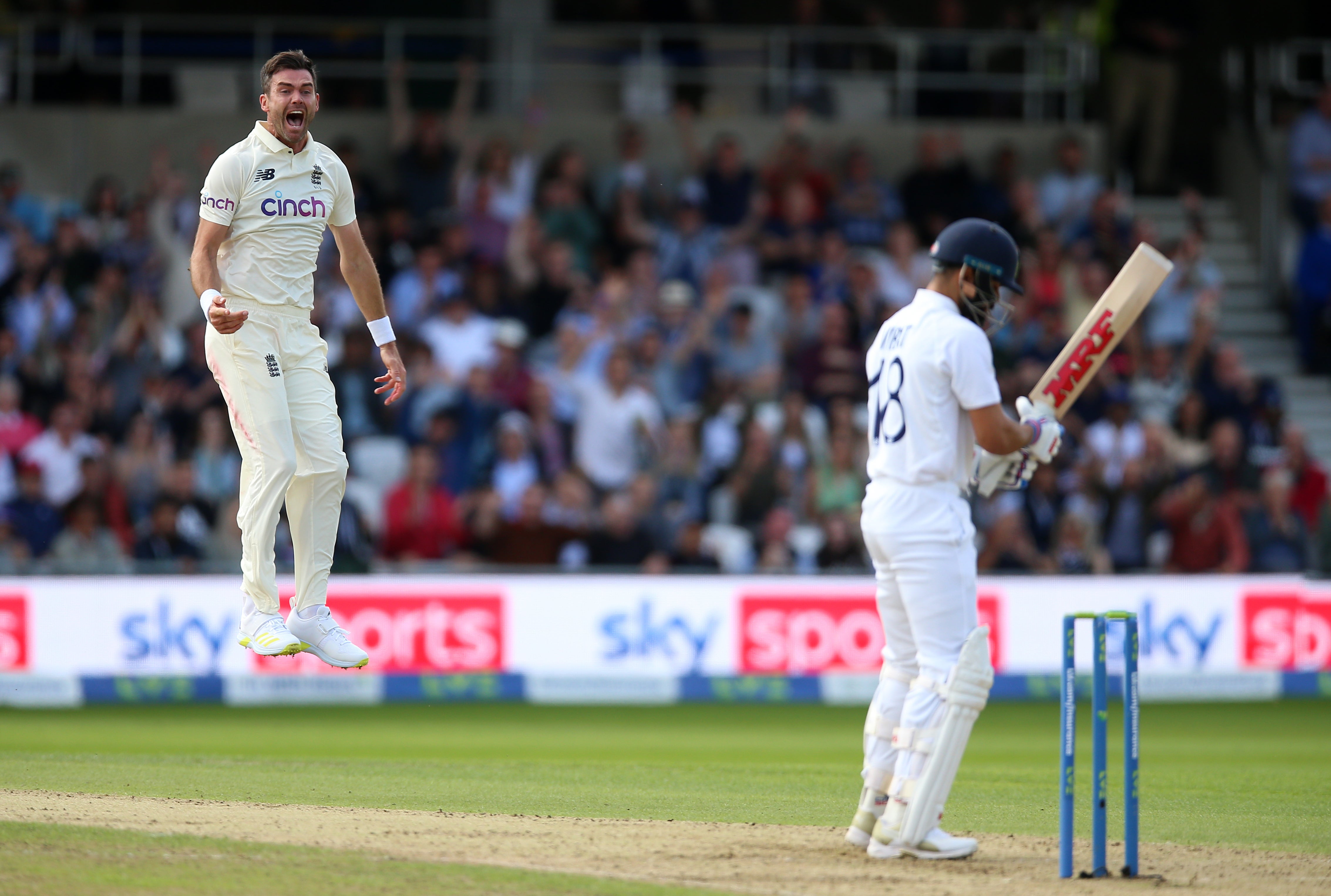 Serving up a delectable diet of inswingers, outswingers and wobble seamers, he boxed the top four in, starved them of runs and delivered all but Rohit Sharma in a neat bow to Buttler.

Rahul wafted airily at the fifth ball of the day, Pujara absorbed a handful of induckers before nicking the one that nipped away, and Kohli’s awkward half-hour stay ended with an overly ambitious drive to one that straightened off the seam.

The rivalry between Kohli and Anderson is long and eventful and took a spiky turn at Lord’s, but there was no verbal send off from the 39-year-old. Just a vein-popping, eye-bulging celebration.

From 21 for three, Rohit and Ajinkya Rahane fought back only for Robinson to land a killer blow by finding the latter’s edge in the last over before lunch. At 56 for four there was room for a fightback, but it never looked like coming. 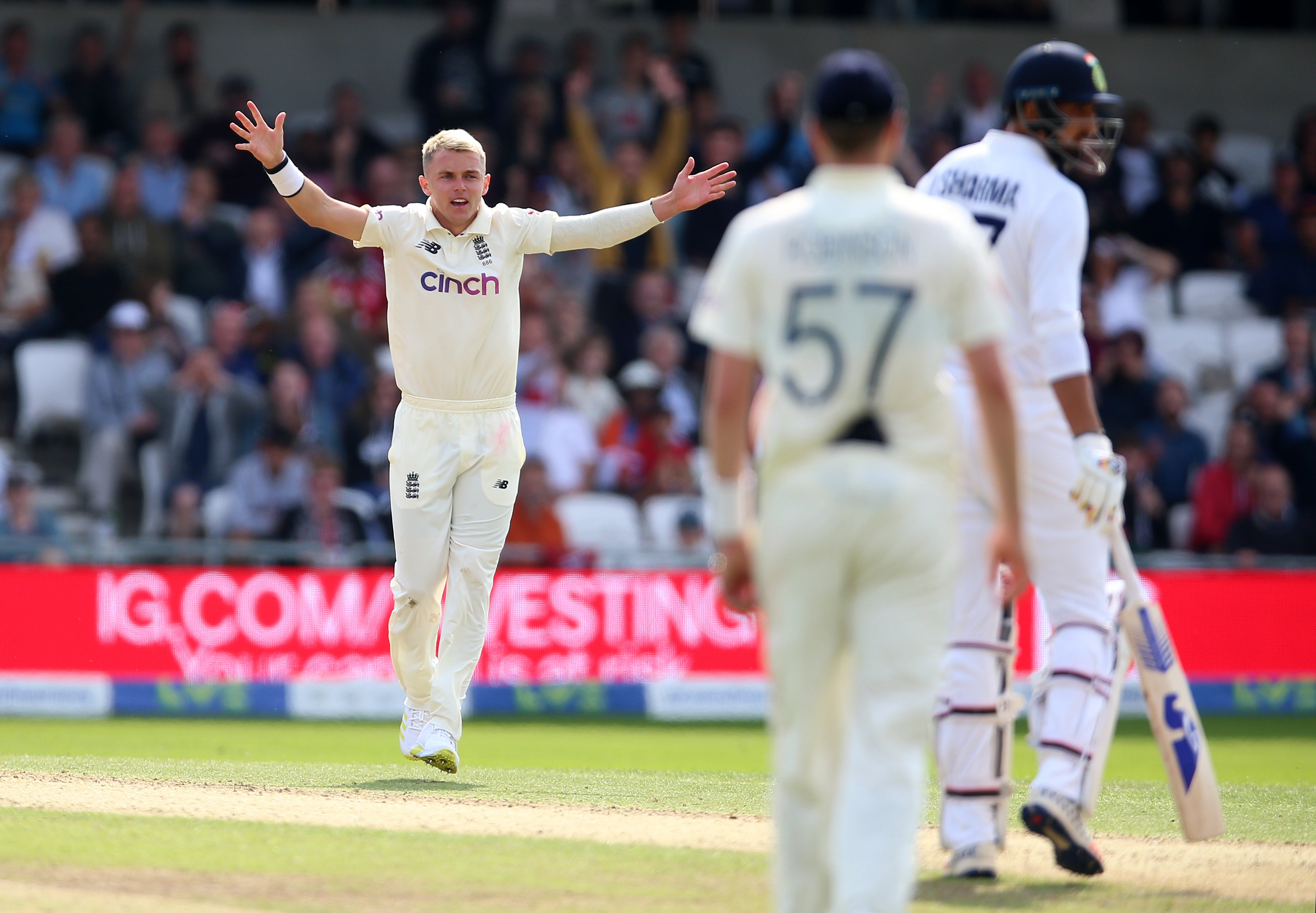 England killed the run-rate, hemming their opponents in through tight lines and scoreboard pressure until things happened in a hurry. Rishabh Pant wafted lazily at Robinson as Buttler gobbled another and Rohit, top scorer with a stoic 19 in 105 balls, dragged a ham-fisted pull off Overton straight to mid-on.

Mohammed Shami, on the back of a career-best 56no at Lord’s, guided his first ball to third slip as the collapse continued. The hat-trick ball was fast and full but even though Ishant Sharma kept it out, there was no halting the demise.

Curran had Ravindra Jadeja and Jasprit Bumrah lbw with successive deliveries at the start of the next over, attacking the stumps and moving it through the air. His shot at three in three came even closer, with Root gamely sending a doomed appeal for review.

Overton then drew a veil over things when Root held Mohammed Siraj at slip, leaving India with their ninth lowest total in Test history.