England suffered a rare setback in Twenty20 cricket as they failed to match India’s hitting power in an entertaining series decider in Ahmedabad.

Eoin Morgan’s men had lost just one of their previous 10 series, also to India in 2018, but were unable to maintain the furious pace that held for the first 30 overs and went down by 36 runs as the hosts sealed a 3-2 scoreline.

India racked up 224 for two, Virat Kohli carrying his bat for 80 not out as England’s attack conceded 11 sixes and 18 fours, but were made to fight for their spoils. 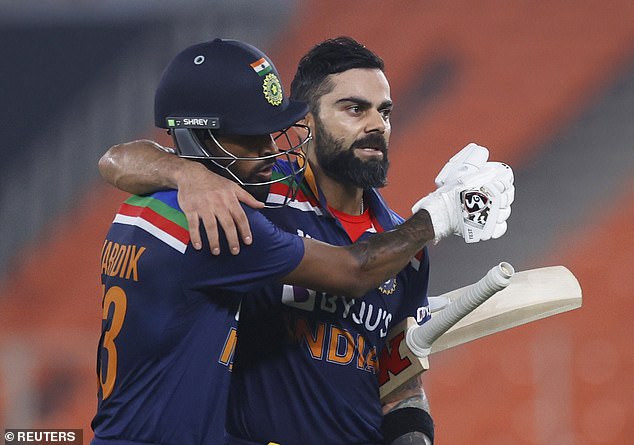 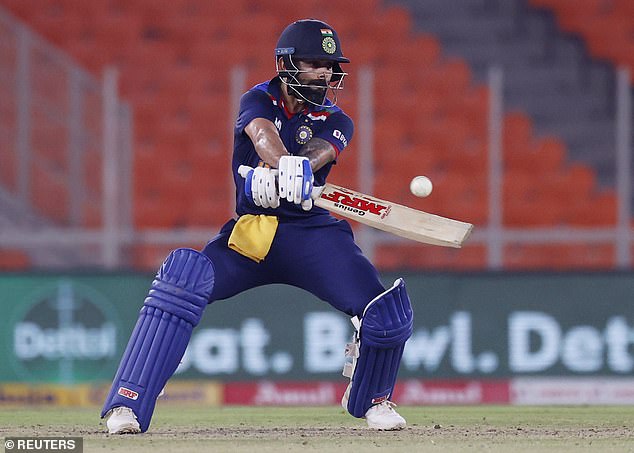 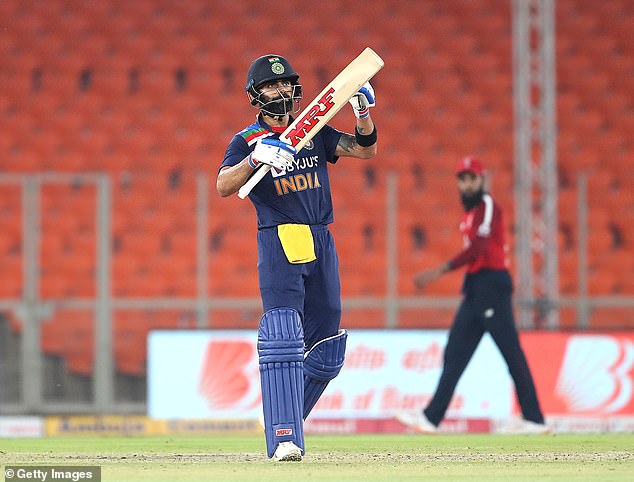 A stand of 130 between a resurgent Dawid Malan (68) and Jos Buttler (52) gave them every chance of a remarkable chase, but two huge overs from Bhuvneshwar Kumar and Shardul Thakur removed both from the equation.

Kumar finished with match-winning figures of two for 15, defining a high-scoring match, as England’s once promising pursuit fell off a cliff to finish 188 for eight.

Despite the result, the most memorable moment of the day belonged to Chris Jordan, who produced an incredible one-handed catch and offload to dismiss Suryakumar Yadav – the latest in a career-long highlights reel of world-class fielding.

Kohli revealed at the toss that he would be opening the batting, KL Rahul having played his way out of the job, and executed the role to perfection.

Batting through the full 20 overs, he allowed Rohit Sharma, Yadav and Hardik Pandya to tee off around him but still finished with a strike-rate of almost 154. As a combination of aggression and anchoring, it was flawless. 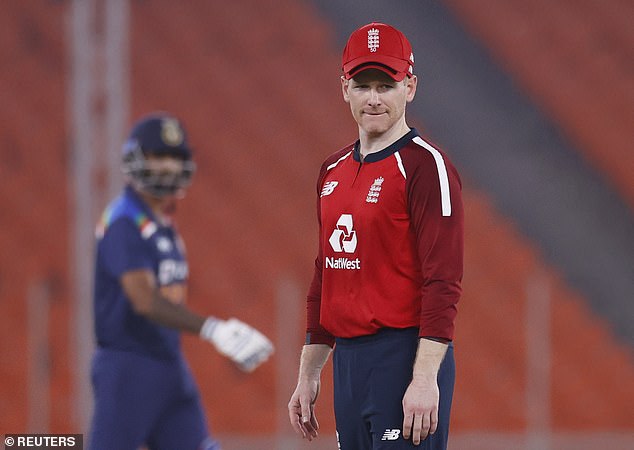 Rohit’s 64 grabbed top billing in the first nine overs, with five sixes and four fours setting the tone for a high-scoring innings. An early swipe off Adil Rashid got him in the mood and his ability to hit Mark Wood off his length turned England fastest and most economical bowler of the series into a non-factor.

His assault finally ended when he dragged a Ben Stokes leg-cutter into his stumps but, at 94 for one, the stage was set.

Yadav made fine use of it, hitting Rashid for two sixes in his first three balls and then taking Jordan for three successive boundaries. It took Jordan’s moment of pure inspiration to cut him short, sprinting round from long-o to pluck another certain six one-handed out of thin air. His momentum was carrying him at speed over the boundary rope but he flicked the ball with care to the waiting Jason Roy, who was laughing in disbelief as he completed his simple part of the bargain.

England were not allowed to savour the moment for long, with Kohli motoring to his best score of the series as he and Pandya (39no) piled on 81. Wood and Jordan went wicketless for 53 and 57 respectively, leaving a massive target. 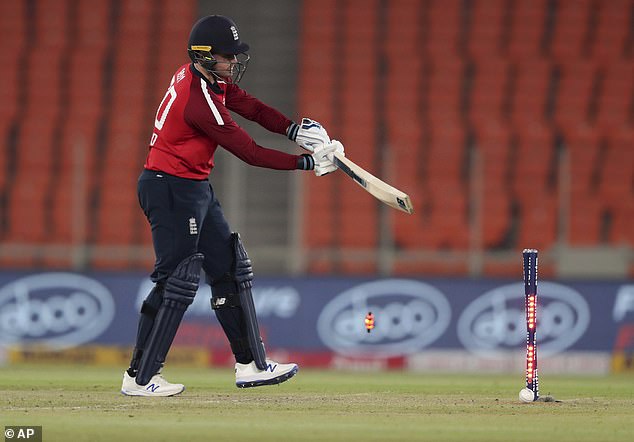 England opener Jason Roy was dismissed for a duck, losing his wicket on the second ball

The chase needed to start in top gear but Roy was cleaned up second ball by Kumar, swinging for the fences. Malan came in knowing his recent form did not match his world number one rating and managed only one off his first five deliveries. With pressure building he caught fire, taking Pandya for 18 in the second over as he gave the middle of his bat a solid workout.

Buttler had to wait for his share of the strike, but was soon laying into Washington Sundar and Shardul Thakur. From unpromising beginnings England finished the powerplay two runs ahead of the comparison on 62 for one.

Buttler’s eyes lit up at the introduction of Rahul Chahar’s leg-spin and he helped himself to three muscular sixes in the space of six balls.

By the halfway stage the chase was still on at 104 for one, with Malan taking another 16 as T Natarajan turned in a guileless over. For the 11th time in 24 appearances, he had the chance to celebrate a half-century, but this time there was plenty still to do. 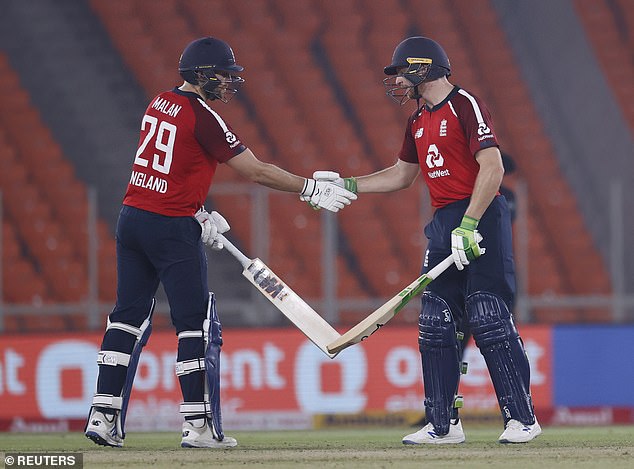 Buttler followed him to the landmark, fractionally quicker in just 30 balls, but fell in the 13th over as Kumar swung it for his side. Not only did he have the dangerman caught on the rope at long-off, he slammed the brakes by giving only three runs. Buttler appeared to share some spicy words with Kohli as he went but his race was run.

Thakur effectively settled things, removing Jonny Bairstow cheaply then taking out Malan’s middle stump as he looked to hit England back into contention. He had restated his own quality for those with short memories but the result was gone.

Kumar bowled out for superb figures of two for 15 and Morgan, Stokes, Jofra Archer and Jordan all perished in a one-sided conclusion to a high-class series.