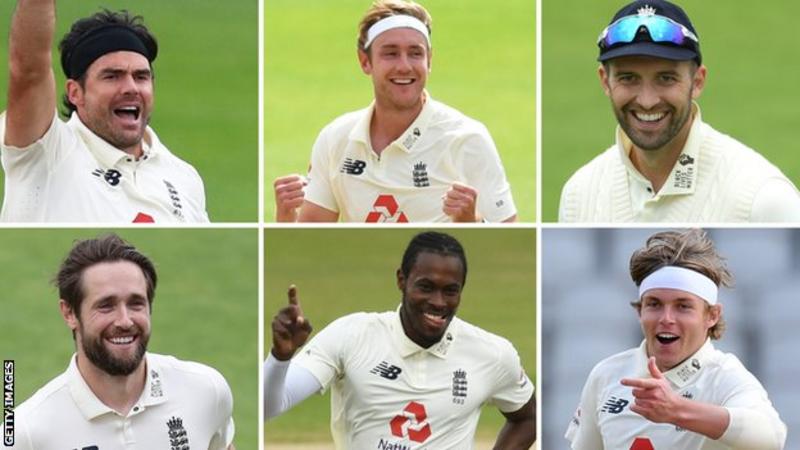 This is far removed from the roulette wheel of the 1980s, when England’s selection panel would feed newspaper pages containing the County Championship averages to a goat, wait for the digestive process to take its course and pick the first legible names to emerge.

How do England select their attack for the three-Test Pakistan series? To what extent should they pay attention to the looming challenges of tours to India and Australia where, since 2013, England have a combined record of played 15, lost 13, drawn two?

The first Test against West Indies earlier this summer highlighted the selectors’ challenge, when Stuart Broad was unjustly left out, alongside the unfairly omitted Chris Woakes and Sam Curran, in favour of the justifiably selected James Anderson, Mark Wood and Jofra Archer.

The batsmen failed, the bowling attack was changed and England won the series. Such is cricket.

But only 22 wickets and a higher average than the other seamers England have used in those games apart from, narrowly, Ben Stokes, and fewer wickets per match than any of them.

Also consider that, counting all of England’s Tests since Curran’s debut in 2018, of the bowlers who have played at least three Tests both with Curran and without him, Woakes, Broad, Anderson, Stokes, Moeen Ali, Jack Leach and Dom Bess all have better averages with Curran as a team-mate; only Archer averages less when Curran is out of the team.

What does this mean? That England have generally selected Curran for pitches that have favoured bowlers (making his own batting stats in the lower order even more impressive)? That having a left-arm seamer – any left-arm seamer – makes the rest of the attack more effective, simply by offering a variety of challenges and angles to force opposition batsmen into continual adjustments? That Curran is the most inspirational human being alive today? Some combination of all of the above?

An incomplete preliminary rummage around statistics for how Test bowlers perform with and without a left-arm seamer in their side has proved inconclusive, although it did reveal Australia’s current and recent pacers have generally fared considerably better individually with Mitchell Starc in their attack.

Josh Hazlewood averages 23.5 in 37 Tests with Starc, and 37.3 in 14 Tests without him; James Pattinson and Peter Siddle also average significantly lower with Starc as a team-mate, and Pat Cummins marginally so.

Whoever England do select, it will be a mighty challenge for Pakistan.

They will face Anderson, whose bowling in recent years in Tests in England has been one of the greatest challenges in Test history for the batters.

Pakistan will face Broad, fresh from taking 16 wickets at 10.9 against West Indies – the third best series average by an England bowler in the last 40 years (12 wickets minimum), and a man whose 401st to 500th Test wickets came at an average of 22.5, comfortably the best of his five career centuries of wickets.

They will face Woakes, whose home average of 22.5 is the best of the 61 England bowlers who have bowled at least 200 overs in Tests in this country since Fred Trueman’s career ended in 1964.

They will face Archer, who became the first England bowler to take three five-wicket hauls in his first seven Tests since the rather less express-paced Phil Tufnell in the early 1990s, and who, with 22 wickets at 20.2 in last summer’s series against Australia, returned the best average by an England bowler with at least 13 wickets in an Ashes series since 1985.

They may face Wood, another selectorial conundrum – are his poor stats (24 wickets at an average of 45) in England relevant, given he has played only one home Test since his remodelled action brought vastly-improved returns in white-ball cricket and overseas five-dayers? Is he a bowler who will have great matches but not great consistency?

Whatever individuals are chosen, the collective threat will be significant but not, as Pakistan themselves showed in drawing series here in 2016 and 2018, insurmountable.

Over the last five English summers, the hosts’ bowlers have collectively averaged 25.3, the lowest figure for a five-summer period in England since 1977 to 1981, when, driven by the statistically-staggering early prime of Ian Botham, the figure was 25.0.

England’s seamers in these home Tests since 2016 have averaged 23.6 – England’s lowest five-summer seam average since 1959-63, when the attack was led by Trueman and Brian Statham, the Anderson and Broad of their day (cue unwinnable cross-generational squabbling).

To put the striking numbers of England’s seam bowlers in context, it should be noted visiting pace bowlers in the last five summers have also fared well, averaging 29.8.

The 2015-2019 period was the first five-year stretch in which visiting seamers had averaged below 30 in England since 1997-2001, so the pitches and balls that have aided England’s high-quality attack have assisted their opponents as well.

More broadly, recent years have been a boom time for seam bowling around the world.

And it has never been harder to play against India in their own backyard given Virat Kohli’s battery of pace bowlers have averaged 24.1 in their last five home seasons (the equivalent figure 15 years ago was well over 40), and their spinners less than 23.

In terms of the global and national trends in Test bowling, this will be a complete and unremitting examination for Pakistan.

They have ample and varied firepower of their own, from the youthful rockets of Naseem Shah and southpaw menace of Shaheen Afridi, the crafty naggery of Mohammad Abbas and the ageing left-arm rockets of Wahab Riaz.

However, England, aside from their bowling excellence and the emergence of a stronger-looking batting line-up, have a three-Test headstart in terms of preparation and should win the series.

If I were to follow my former Test Match Special colleagues Ed Smith and James Taylor into the selectorial laboratory (an ‘If’ of Rahkeem Cornwall proportions, admittedly), I would pick the same seam attack as played the third Test against West Indies (Anderson, Broad, Woakes, Archer).

However, I would also engage a hypnotist in the backroom staff to hoodwink the players into thinking Sam Curran was also in the team, and to trick Broad into thinking he had just been dropped for a one-off Test against Ruritania.

Depending on the pitch and Stokes’ fitness, from the current squad, I would play either Bess or Zak Crawley. But preferably Leach. Or maybe Curran.

Bring back the goat!

Celebration Mile: Baaeed could wait for Goodwood in August after exciting connections with Newmarket victory