Just two days in and we are already into the third innings of this fourth Test at the Kia Oval. And it should be said this is one of those rare occasions where it is not down to a lack of quality.

England’s eventual 290 all out owed much to the brilliance of Ollie Pope’s 81 and the daring of Chris Woakes’ straight 50, both on their returns to the XI. Were it not for India’s persistence across the first 67 overs of play, the first-innings lead of 99 could have been greater. Thanks to some diligent work through to close, Rohit Sharma (20 not out) and KL Rahul (21*) have already made their way to 43 for no loss.

There is an inevitability to Pope when he is batting at The Oval. Not just that it is here where he came through the ranks and honed his craft. But of all the first-class cricket he has played here, he averages 100.71, which makes sense given seven of his 11 red-ball hundreds have been scored on this ground.

Should it have been eight? No doubt, especially as this was the first of his 21 caps at his home ground. The control when he came to the crease at 53 for four was executed through some crisp strokes down the ground and square. Only 24 of his runs came in fours, yet he always seemed to be playing shots. Which, in a way, has been the problem with Pope.

A first hundred in Port Elizabeth in January 2020 (135) was supposed to be the breaking of the dam. However, a dislocated shoulder later that summer and complications on that joint and tweaking techniques has disrupted progress.

But a full recovery and a move back to a middle-stump guard from middle-and-off – to put him more leg side of the ball – has taken his front pad out of the line of fire. He remains a bat-on-ball defender, which was how he met his untimely demise: playing at a wide delivery from Shardul Thakur at the last moment and skewing the ball onto his stumps. 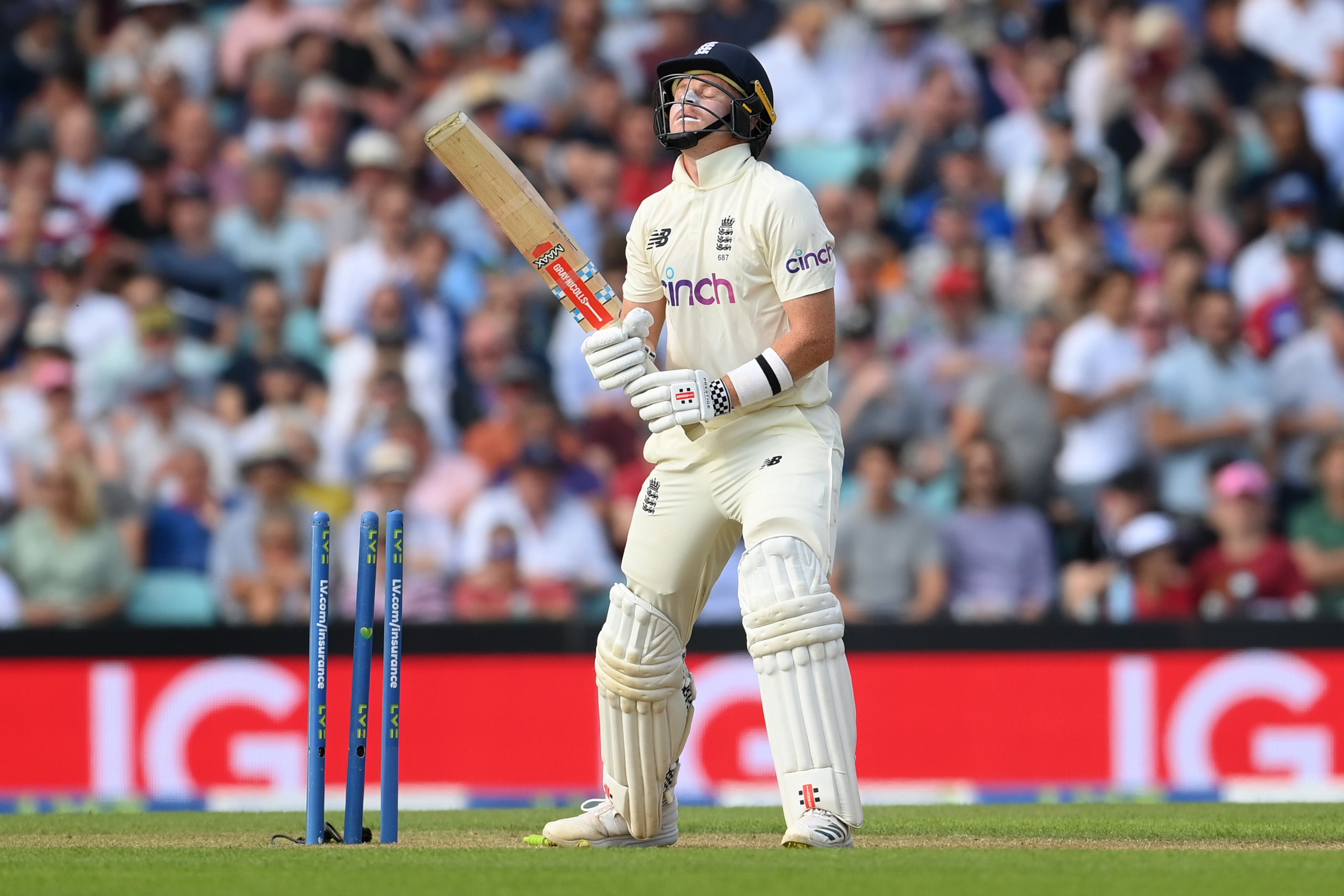 Pope reacts after being bowled for 81 by Shardul Thakur

The dismay at finishing 19 short of a second Test hundred – this score now registering as one of six in the 50s column – overshadowed the real fear that England will have ceded their control on 250 for seven, with a lead of 59. But, for the second day in a row, Woakes stood tall and struck 11 boundaries – most of them pretty, all of them necessary – to put on 40 more with the tail. The end came with a sharp bit of relay work between wicketkeeper Rishabh Pant and Jasprit Bumrah, who threw down the non-striker’s stumps after Woakes tried to run a bye on a missed ramp shot to steal the strike for what would have been the 85th over.

The key stand came between Pope and Jonny Bairstow, ensuring a position of 62 for five was not as terminal as it looked. Their 89 reinforced what we knew on Thursday evening – that India’s first effort of 191 was lacklustre – but were starting to doubt after the tourists’ early morning work.

Pope and Bairstow’s partnership felt more than just runs. More than the complement of Pope’s busyness and Bairstow’s bustle; one’s top-hand touch set against the other’s bottom-handed brutality. As they took their turns at the non-striker’s end, they might have looked at the other facing up and wonder if they were looking at who they once were and what they may become.

Bairstow has been Pope: that youngling promised the keys to the kingdom when he made his Test debut aged 22 in the summer of 2012. And Pope may well end up being Jonny: a constant for a decade picking up as many doubters as believers. He’d shake hands for Bairstow’s 78 caps (and counting). And it might be that what he adds to his 21 will carry a similar sense of not quite living up to other people’s expectations. Of output constantly scrutinised against an unattainable standard of greatness imposed upon him by others swept away in that early promise. 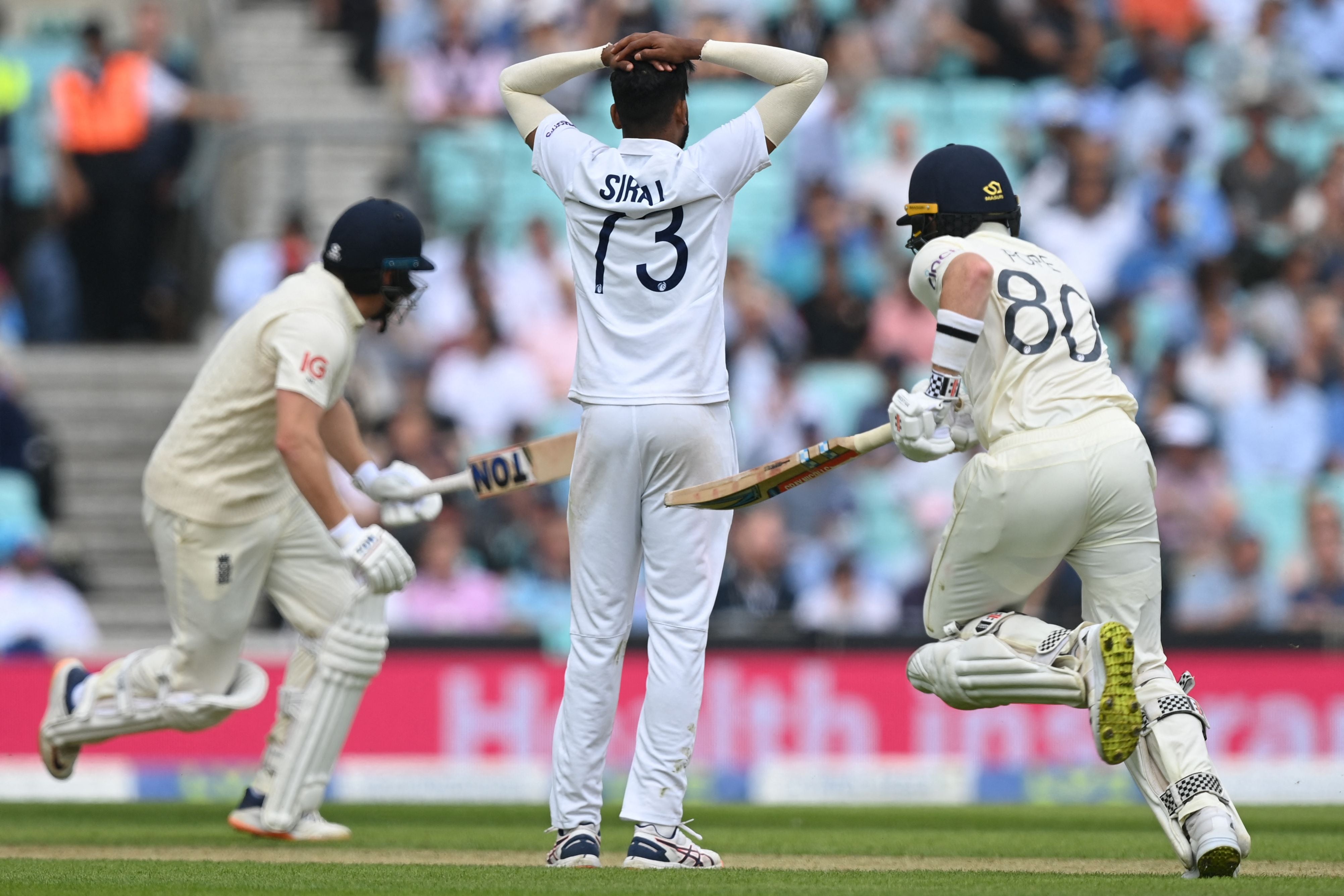 Pope and Jonny Bairstow put together a handy partnership

The other aspect to this is that Pope, really, was supposed to make Bairstow obsolete. Once Jos Buttler had the gloves and patience wore thin on a susceptibility against the straight ball – a problem, no doubt – the Surrey batter, 22 on debut in 2018, was supposed to establish a generational handover. It explains why they have only played five Tests together – all against India, as it happens.

That they are two very different right-handers ensured fields could not just be auto-piloted for both. Their collective shot-making meant it was more a counter-attack than consolidation when they came together for the fall of Dawid Malan’s wicket. The left-hander was caught brilliant by Sharma at second slip to give Umesh Yadav (three for 76) his second of the morning and third in the innings to take him to 151 Test dismissals. In turn, India just had five wickets left to get, ideally, within the 129 runs they led by.

Pope and Bairstow, though, struck 77 between them up to lunch – the 50 partnership up in 55 balls – to rest at the interval just 52 behind. And though Bairstow was found wanting straight again – LBW on review for Mohammed Siraj’s only dismissal in the innings (one for 42), Pope cracked on with vice-captain Moeen Ali for company. They gained parity by exchanging their wares as aesthetes: Moeen very much winning the bout within the bout with a gorgeous extra cover drive that took him to 33, put England 29 ahead and felt like a moment where India began looking around wondering if they were watching the game slowly yet beautifully taken away from them.

Alas, Moeen’s desire to speed up led to a slog sweep of Ravi Jadeja to Sharma at cover for 35, ending the partnership on 71 and handing India back some control with a score of 222 for seven. They had that little bit more when Pope went, followed by Ollie Robinson, leaving Woakes and James Anderson to forage at the death.

While Woakes struck gold, Anderson stuck with steel, boldly behind as many of his 12 deliveries as possible across a 39-minute stint. After he was targeted by Bumrah at Lord’s, the 39-year-old has seen it as a point of pride to not shy away from the heat. He was cheered for every block, and more so for every run he took, not just the one that came from his bat. 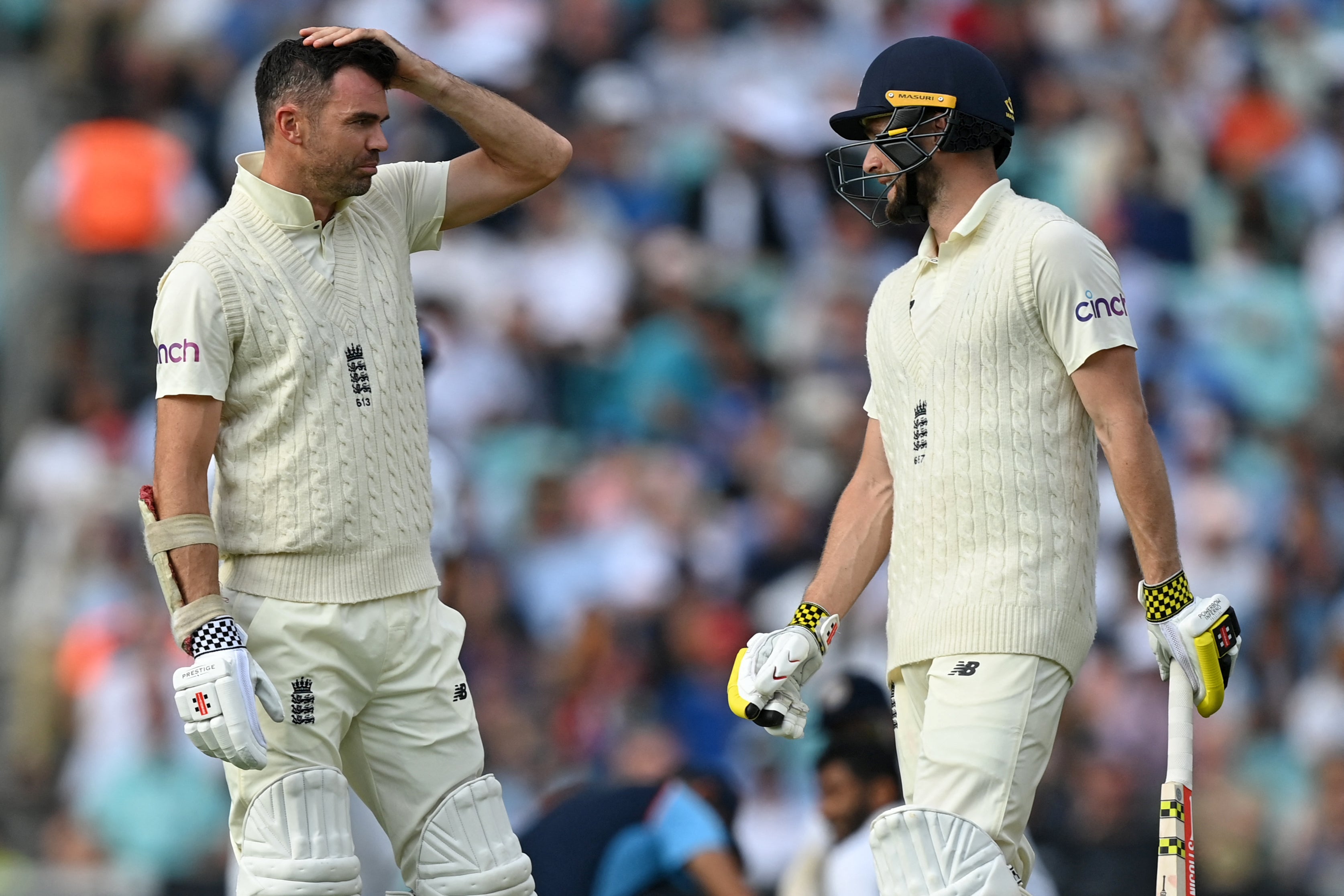 He tried just as hard to make in-roads in the hour-and-a-bit of play that India had to bat. Alas, the one sure-fire edge he was able to find – Sharma, on six – flew low beyond Rory Burns, who failed to pick up the ball with the backdrop illuminated by the Friday evening sun.

There is idle talk that it won’t be as prevalent tomorrow, though thankfully with no threat of rain. With Sharma and Rahul picking up where they left off to pick off the remaining 56 runs before parity, before setting up a final-innings chase, we are due for a toasty conclusion.

Another matter that seems to have been concluded is the repeat appearances of Jarvo69. Having entered the field of play at Lord’s and then Headingley, the two-bit prankster repeated his tired trick at the Oval, attempting to bowl a delivery from the Vauxhall End and barging Bairstow in the process. The Metropolitan Police confirmed a man had been arrested on suspicion of assault following the incident. Whether prosecution is forthcoming, the ease at which he has made his three appearances – each less funny than the last – asks serious questions of the ECB’s checks and stewarding at these Test matches. This could have been a serious incident. Many should be thankful it was merely the same idiot, Daniel Jarvis, three times.