Gai Waterhouse and Adrian Bott launched a seven-horse assault on the All-Star Mile before nominations closed on Monday, which included the enigmatic Alligator Blood, who is not yet eligible for the race.

Among the leading dual-state stable’s nominations, last year’s contender Shout The Bar and group 1 placegetter Riodini will launch their campaigns to be voted into the $5 million race, to be hosted this year at Flemington. 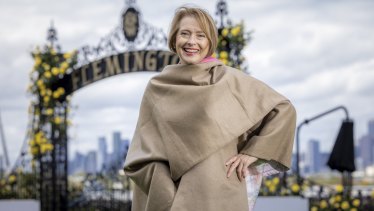 Shout The Bar was awarded a wildcard into last year’s race, having won the group 1 Empire Rose at Flemington in her prior spring campaign and placing third on return in the autumn in the group 3 Tressady.

Speaking from the Gold Coast, Waterhouse said the accomplished mare didn’t handle the wet conditions at Moonee Valley last year but deserved to be considered among the country’s elite milers.

“She likes the Flemington mile and she’s been effective at group 1 level there before.

“She’s a very good mare, a really outstanding mare. I can’t see why she wouldn’t be effective [in the All-Star Mile].”

Riodini is also searching for an elite level win, having placed in an Epsom and a George Main, and would not look out of place in the rich 1600-metre contest.

“He’s been placed in group 1 miles around NSW,” Waterhouse said.

“He’s a very good horse, a very good gelding, and deserves his spot in the All-Star Mile. I think it’s his forte, the mile.”

But Waterhouse’s options don’t stop there. Three-year-old Frankel gelding Converge is a group 1 winner over the mile and Waterhouse says he’d have an outstanding chance, while four-year-old mare Vangelic placed in the 1500-metre Golden Eagle behind I’m Thunderstruck at her most recent outing. 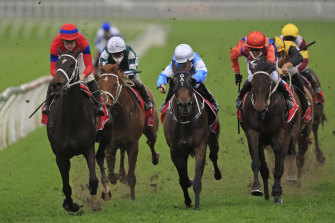 Verry Elleegant drives through on the inside to beat Riodini and Think It Over (right) in the George Main Stakes.Credit:Getty Images

“She wouldn’t at all be out of place there,” Waterhouse said.

“She’s come back stronger; trialled today at Warwick Farm, and is a really good filly.”

Silent Impact and Entente were also thrown into the ring, as was Alligator Blood who failed as a $2.80 favourite in the 2020 edition at the end of a long campaign.

While he’s ineligible at the moment, having not placed in a stakes race in the past 12 months, Waterhouse said the stable would try and find a race for Alligator Blood to warrant a wildcard berth.

“[Racing Victoria general manager] Paul Bloodworth rang and said that if we won a Futurity or one of those types of races, he would get accepted,” she said.

“We have to do something like that to get him in it.”

A total of 77 horses have been nominated for the $5 million race, including 20 group 1 winners. Those also nominated include Zaaki, I’m Thunderstruck, 2020 Cox Plate placegetter Armory – now with Ciaron Maher and David Eustace – and boom Chris Waller filly Espiona.

Melbourne Cup winner Verry Elleegant was also among the nominations, but is more likely to campaign in Sydney in the autumn, while Cup runner-up Incentivise was a notable omission after picking up an injury in November’s race.

Voting opens on January 24, where the top 10 voted horses are guaranteed a spot in the field for the March 19 race.

Big yeah ahead for Kimari