Sky Sports Racing’s Alex Hammond remembers some huge-priced outsiders doing well at Epsom before debating the merits of some of this year’s Derby longshots.

You must be careful what you wish for, as I’m finding out in the run up to this weekend’s Cazoo Derby at Epsom.

The summer has finally arrived and despite having 88mm of rain during the first 24 days of May, Epsom’s clerk of the course Andrew Cooper has had to turn on the taps this week to prevent the ground becoming too fast.

As I told you last week, I thought my ante post Derby wager on Mac Swiney had gone west but was subsequently busy congratulating myself for my foresight after his grinding win in the Irish 2000 Guineas. However, this balmy weather isn’t filling me with confidence and whilst his chance isn’t completely gone, it would be much improved on softer conditions.

So, if not Mac Swiney, who? I certainly think the race is more open than the betting suggests with Sky Bet having Bolshoi Ballet as their 6/4 favourite. That seems mighty short to me given the SP of some of the most recent winners of this unique challenge. For those with a memory as long as mine, the 500/1 about runner-up Terimon back in 1989 was exceptional, but more recently we’ve seen 25/1 and 40/1 winners of this great race. Whilst I’m not predicting a shock of those proportions there are a handful of colts languishing towards the bottom of the betting that can’t be entirely ruled out.

One such horse is One Ruler (25/1 with Sky Bet) who like Mac Swiney also has top form on testing ground but is expected to progress on a better surface this season for Charlie Appleby. He was a bit keen in the early stages on his reappearance in the 2000 Guineas and wasn’t given a hard time once his chance had gone. Dante winner Hurricane Lane is the stable’s number one hope, but this lad can’t be confidently ruled out given the level of form he showed as a juvenile.

Also, Lone Eagle at 33/1 wouldn’t be the most unlikely of winners. I tipped him up for his reappearance at Sandown in the Classic Trial, but he ran below par there and typically when I’d left him well alone, he duly hacked up in the Cocked Hat Stakes at Goodwood (formerly called the Predominate Stakes for those of us of a certain vintage).

Granted it hasn’t thrown up a Derby winner since Troy in 1979, but Khalifa Sat won the race in 2020 and went on to finish second in the Derby at 50/1. Lone Eagle strikes me more of a Leger horse and his trainer Martyn Meade has said as much, but I wouldn’t discount him running into the places at Epsom.

What about a 33/1 winner for Joseph O’Brien, who won the race as a jockey on Camelot and Australia and will have sat on a few more Derby winners than that back at Ballydoyle. Southern Lights is his representative, and he is quite hard to gauge having just had three starts, but clearly has a decent reputation.

He was well fancied for his debut as a two-year-old and was just touched off before coming back as a three-year-old and impressing in his maiden win at Leopardstown. He then stepped into a Derby trial and what a trial that was. Bolshoi Ballet won that Derrinstown Stud Derby Trial with a below par Mac Swiney in fourth.

Southern Lights was only sixth, but he met trouble in running when making late progress and coasted home thereafter. It certainly wasn’t a bad a run as his finishing spot would suggest and he’ll have learned plenty from that too. He wasn’t in the same class as the winner but looked like the step up to a mile and a half will suit (and maybe further in time) and would have finished an awful lot closer without that crucial check.

So, a few each way options for you away from the obvious runners and with Sky Bet paying four places instead of three it may be worth taking a chance on something at a price. I’m still metaphorically clutching that Mac Swiney ticket in my grubby mits and hoping for the best. 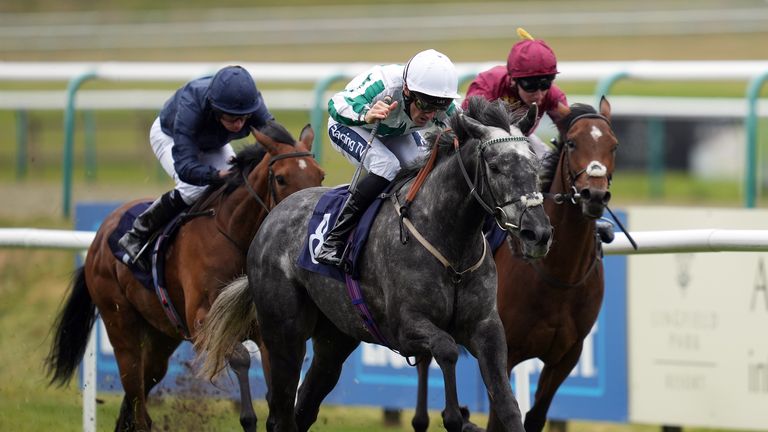 The Cazoo Oaks declarations have been made and we now know that 14 fillies will line up on Friday. Speaking of reputations, there were few bigger than Santa Barbara‘s before her reappearance in the 1000 Guineas. That was only her second lifetime start and her inexperience showed, but I’m not convinced Epsom will completely bring out the best in her, so I’m happy to take her on again. Sky Bet have gone one better in the Oaks and are paying five places, so what might run well at a price here?

Saffron Beach is a 10/1 shot with Sky Bet and I think she’s got superb claims of giving her excellent trainer Jane Chapple-Hyam a first classic victory. Did you see the win of her Uber Cool at Chester on Saturday? The horse hadn’t set foot on a racecourse for over two and a half years but rocked up and won doing handsprings. To get a horse primed to do that after such a long layoff takes some doing and Saffron Beach is in good hands. Her stamina isn’t assured, but that’s my only reservation.

At an even bigger price Sherbet Lemon must come into calculations. She’s 25/1, despite her win in the Lingfield Oaks Trial. She isn’t one of those ‘sexy’ runners so maybe slightly overlooked for Archie Watson and Hollie Doyle. Lingfield is as close a comparison to Epsom there is and generally if you cope with Lingfield, Epsom’s cambers should hold no fears. She was gutsy when winning last time and whilst I’m not sure she has the class to win an Oaks, I could envisage her finishing in the first 5 on Friday for her upwardly mobile young trainer.

There’s no Love in the Coral Coronation Cup, but plenty of love for 4/5 favourite Al Aasy and that’s no surprise given his two Newbury wins this season. He wasn’t taken off the bridle last time out and had pretty much sauntered to victory the time before.

Were they Group 1 performances though? This will be his stiffest test against proven top-level performers, and I was really taken by a resurgent Japan at Chester last month. It was over a trip that looked as if may stretch him, against a horse who had stamina to burn, but his class told, and he looked awesome there. I’m happy to stick with him and at 100/30 is more attractive to me than the odds-on favourite.

Anyway, now the sunshine is finally here it can hang around for a while, as my Royal Ascot outfits aren’t going to be complimented by a raincoat and it won’t do those fancy hats much good either! It’ll soon be time to chat to you about the greatest flat festival in the world and I can’t wait to be there all five days for Sky Sports Racing.

Tofane locked in for The Everest; Eduardo puts slot hopes on line in The Shorts