Sunday promised drama and intrigue but failed to deliver on either. But perhaps that was the best reflection of another year and another Essex triumph.

Their victory in the inaugural Bob Willis Trophy came through a draw chiselled out against Somerset. As per the rules for this Lord’s final, the winner in the event of a stalemate would be decided on the first innings lead, which Essex claimed by 36 runs thanks to an imperious 172 from Sir Alastair Cook on day three.

That innings settled this encounter, though the brunt of the saving work on Sunday was done by Adam Wheater and Ryan ten Doeschate. They came together with a minimum of 27 overs to go and five more wickets for Somerset to nab. They were eventually separated only four balls before both teams decided the match had run its course. .

With this, Essex have now been crowned as the best first-class side for the third time in four years, after County Championship victories in 2019 and 2017. For Somerset, a familiar feeling as runners-up for the second year in a row, though this will sting a lot less than this time last year, when Essex celebrated widely in front of them on the Taunton outfield.

Somerset had hoped the carrot of a 237 target and 80 overs to get them in was enough for a sustained attack from Essex that would allow wickets to be picked off. They managed five in “real” time when the match felt there for the taking. 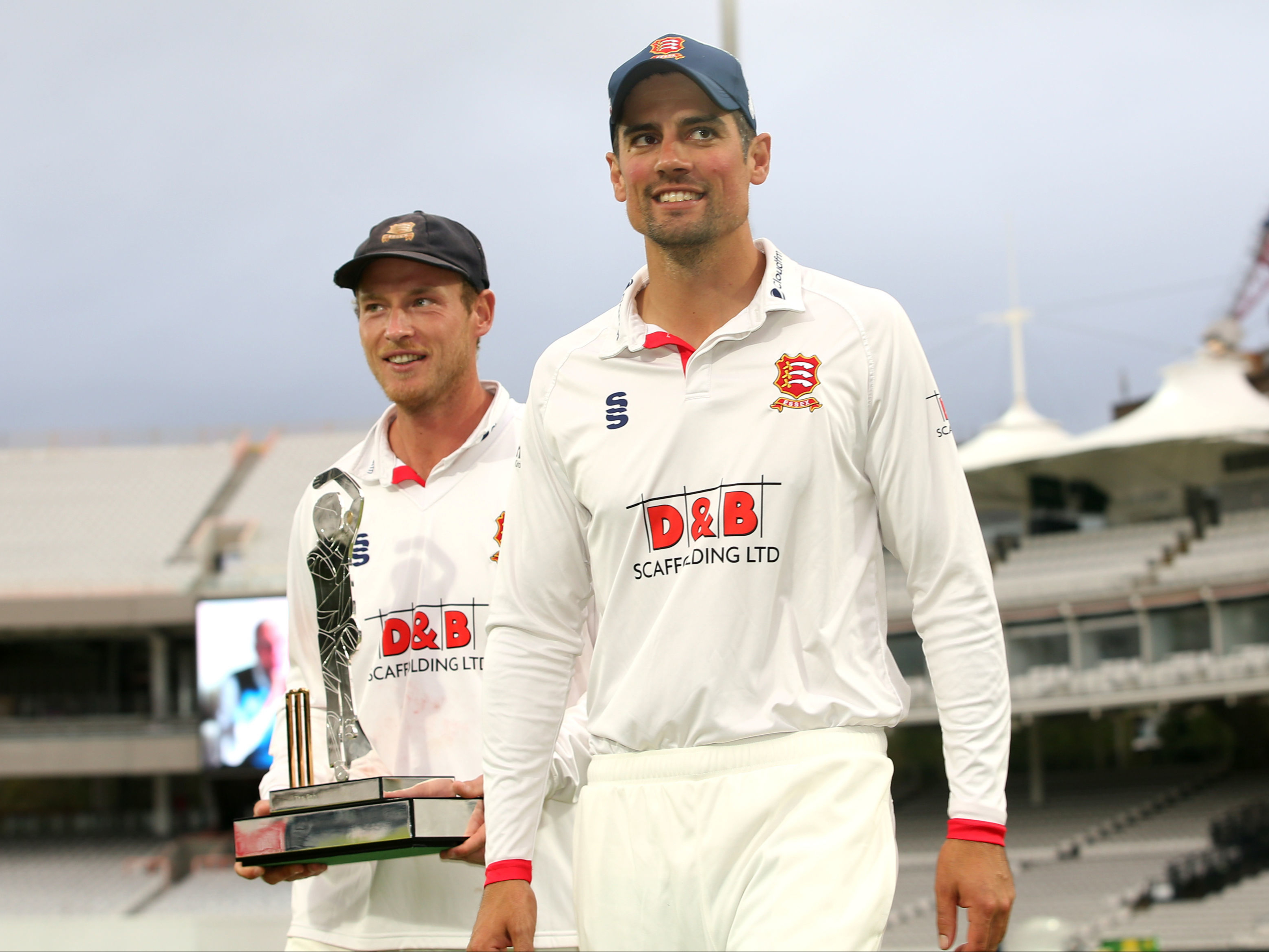 They had done everything asked of them, beginning day five with a dash for 8.1 overs led by Craig Overton with 28 of the 45 in the morning to take them to 272 for seven. The lead of 236 was deemed enticing enough for Essex, who emerged after the declaration to play their shots.

A slashed Nick Browne four off the first ball and Cook’s precision straight drive to get off the mark suggested Essex were keen to knock these runs off. But the breaks were applied in the eighth over when Browne was caught low at third slip by Tom Abell to Lewis Gregory’s second ball, and captain Tom Westley was trapped in front by Overton.

Both seamers combined to trouble Alastair Cook who held the keys to the match having driven it Essex’s way on day two. There were a couple of notable shouts before lunch: of LBW off Overton and a caught-behind from Josh Davey. Nevertheless, a gloomy lunch interval allowed both parties to assess where things were at with 61 on the board for the loss of two.

But Cook’s stand would end in the second session, a dismissal surrounded by as much noise as there could be with no one sat in the chill of the stands. Gregory would be credited from around the wicket with a ball that held its line through to Steve Davies. Cook played and umpire Russell Warren agreed with the appeal from all in the field that an edge was found.

Cook was not so sure, shrugging and crossing his feet at the decision, bemused as to why he was being sent on his way. Though he might have not agreed, enough DRS reviews have shown edges that had previously been oblivious to batsmen without the spike on UltraEdge to suggest there was no need to peg this as a mistake. There Cook’s Bob Willis Trophy ended, head shaking after 563 runs at an average of 56.30.

With 169 still to get and the competition’s leading run-scorer out of the running, Essex gradually packed up all that lay outside and began sorting the till. And once Dan Lawrence went at the start of the 37th over to make it 98 for four, the decided whole-heartedly to shut-up shop.

There would be only one more wicket from that point on, Paul Walter trapped LBW to Jack Leach. Lawrence happened to the left-arm spinner’s first first-class cricket since 24 November – day four of a Test match in New Zealand. Tim Southee was the man then. 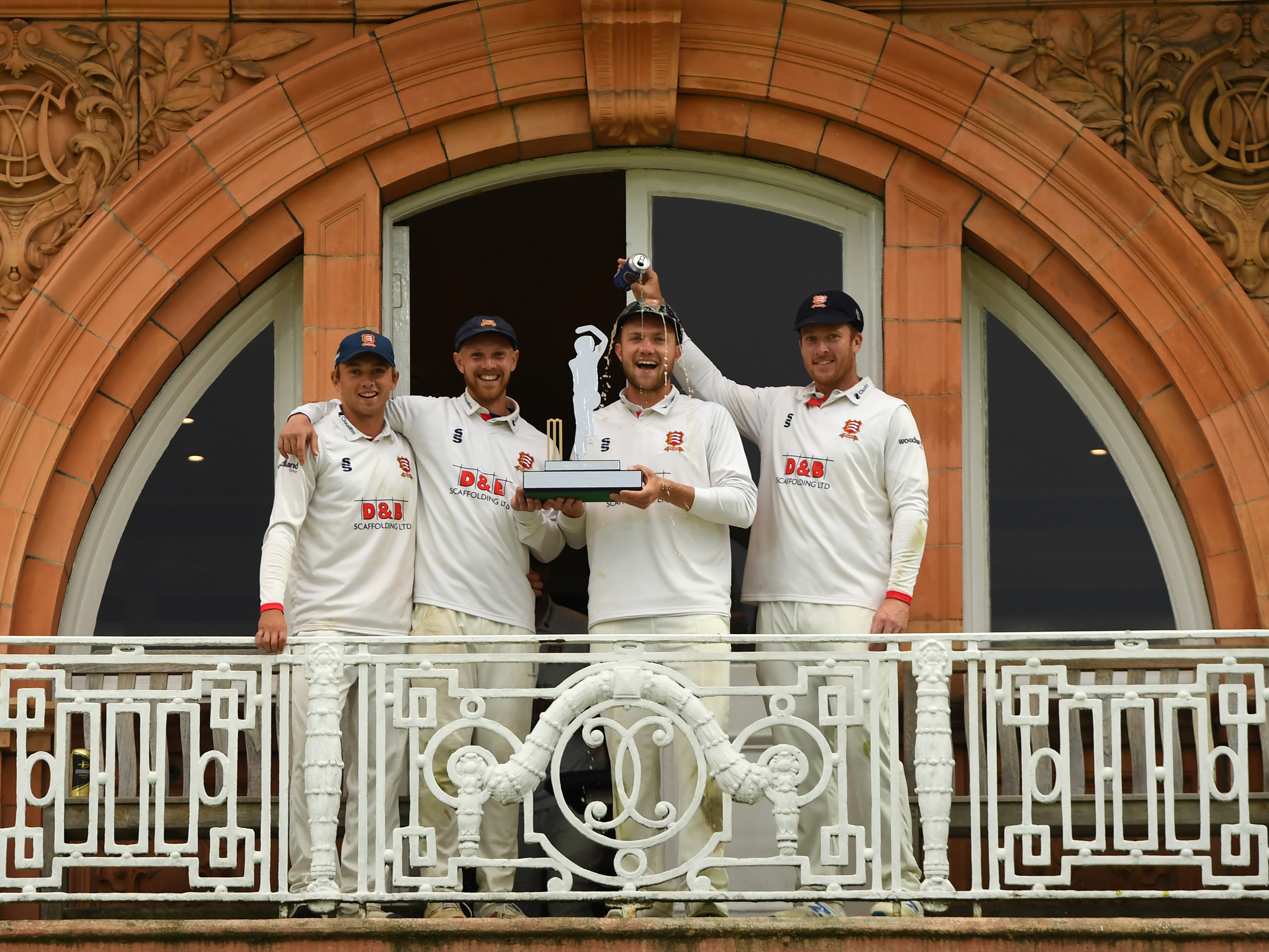 With 27.1 overs to go, Leach represented skipper Tom Abell’s last hope of rattling through the remaining five wickets. That it did not happen is no reflection on Leach, who came into this match after 10 dormant weeks in the Test bubbles of the Ageas Bowl and Emirates Old Trafford, and had only bowled eight overs since that dismissal of Southee. This pitch, even in its fifth day, had simply flattened out.

Thus, Wheater and ten Doeschate closed out the match with relative ease. The latter would not see out the day, skying an unnecessary sweep to George Barlett which allowed Leach to finish with figures of three for 38.

“It’s hard to put into words how chuffed I am for the boys,” said Westley at the close. “I’m incredible proud of the boys up there, the management staff. This may never happen again so to win it is a great feeling.”

“I think what’s been fitting with this final is that I think the best two red-ball sides in the last few years have played at Lord’s in this game. This is just a continuation of that success, and long may it continue.” Celebrations were to be worked out on the hoof, though Westley hastened to add that anywhere the night took them would strictly be just six at a time.

Maybe it was greedy to have wished for a more engaging conclusion. Perhaps the fact domestic first class cricket – competitive first-class cricket at that – was able to be put on is reason enough to be grateful. The standout performances even here, of Eddie Byrom, Alastair Cook, Tom Lammonby and Lewis Gregory, could at least nourish some through the winter which will be an uncertain time for a number of counties, including these two whose seasons are now over with neither in the quarter finals of the T20 Blast.

Moreover, this has been a much-needed opportunity for first-class players to show their worth, doing something that reminds them of what it is to be normal. From a mental health point of view, it has been a godsend for many.

As for the future of the Bob Willis Trophy, the wheels seem to be in motion for a similarly laid out competition of three groups next year, and perhaps even for longer. But for the time-being, the trophy in the image of Willis’ instantly recognisable gather and the money raised throughout the competition on behalf of Prostate Cancer UK.

The summer has been a challenge for the English game. And though the Bob Willis Trophy may not have been perfect, the opportunity to do something worthwhile and good this season has not been wasted.