Faf du Plessis has been ruled out of the Hundred without playing a single game after experiencing long-term concussion symptoms.

In the aftermath of a fielding collision with Quetta Gladiators teammate Mohammad Hasnain at the Pakistan Super League two months ago, du Plessis suffered memory loss and headaches.

The South African batsman had been recruited as a replacement captain by Northern Superchargers after Aaron Finch was ruled out because of international commitments with Australia. 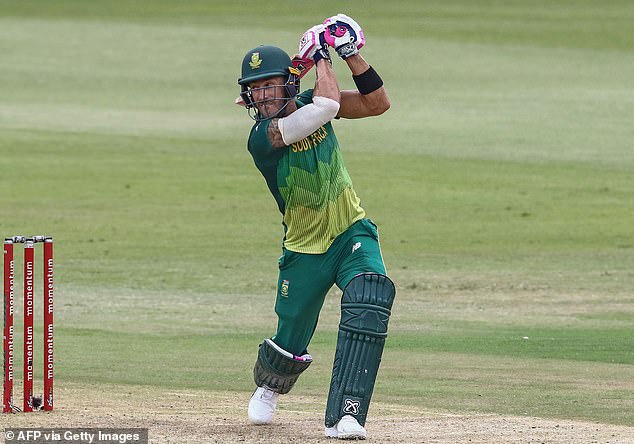 However, it was apparent when the headaches resurfaced after just one net session at Headingley that the 37-year-old was still affected by his freak accident in Abu Dhabi.

He has been monitored carefully by the Superchargers medical staff since, to the point that he only picked up a bat again for a gentle work-out on Thursday, when the Leeds-based team struck the competition’s first score of 200 against Manchester Originals.

Du Plessis’ stand-in Dane Vilas, who struck 36 in that 69-run win, will now stay with the Superchargers permanently.

Du Plessis still hopes to feature in the latter stages of the Caribbean Premier League, which begins at the end of this month.

He retired from Test cricket in February, saying ‘the next two years are Twenty20 World Cup years and because of this, my focus is shifting to this format and I want to play as much of it as possible around the world so that I can be the best player I can possibly be.’

However, his World Cup hopes now appear to hang on how he reacts when he steps up his intensity in training. Squads for the tournament need to be submitted to the ICC by September 18.

Meanwhile, another of the Hundred’s overseas recruits, Afghanistan all-rounder Mohammad Nabi has left the tournament to be with his ill mother. He has been replaced at London Spirit by Sussex’s David Wiese.

At the other end of the career spectrum, teenage Somerset fast bowler Sonny Baker has been confirmed as an injury replacement for Luke Wood at Trent Rockets.