Shane Warne’s family and friends have gathered to farewell the sporting great at a private memorial service held at St Kilda Football Club in Moorabbin on Sunday morning.

Around 80 people, including Warne’s parents Keith and Brigette, brother Jason, children Brooke, Jackson and Summer are among those paying their respects to the late cricketer.

Also in attendance are a number of Warne’s former cricketing teammates and opponents, including former England captain Michael Vaughan, high-profile media colleagues including Eddie McGuire and Sam Newman, poker friends and those associated with his beloved St Kilda AFL club, including Aaron Hamill and Steven Baker.

The beloved cricketer died at age 52 of a heart attack on March 4 while holidaying in Koh Samui, Thailand.

Maguire is hosting the funeral and delivering the eulogy.

Speaking before the service started this morning, he said the Warne family had been so gratified by the public support for Shane.

“Warnie played for the public,” Maguire said, speaking to Nine’s Sunday Footy Show, from the ground.

Everyone attending had been be given a Saints scarf in memory of Warne, Maguire said. “They’re one short so I won’t be wearing one!” the former Collingwood president added.

Maguire said Warne was so loved because he was fallible.

“He was a super man,” Maguire said.

“He did the things you dreamt of doing as a kid. He took the hat-trick, he took the 700. He had the Gatting ball. He did the things that we all sort of thought, ‘Wow, wonder what it would be like if you were a playboy in London society’. 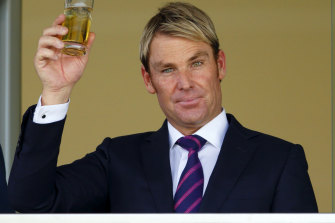 “He was that sort of person, he brought together so many things but what was the magic part about Shane Warne is he sprinkled his gold dust everywhere he went. He wasn’t one of these people who then became a hermit and forgot his friends. He brought his friends into everything in life.”

The fact that English captain Michel Vaughan had flown to Australia to attend the funeral said a lot about Warne, Maguire said.

“He had an amazing charisma that took this Black Rock kid, Black Rock bogan if you like, who would go to three-star Michelin restaurants and order a pizza in, and could walk with kings and the greatest names in world sport but at the same time never forgot those who he walked with around the streets of Melbourne with. That’s why everyone loved him and that’s why we’re grieving so badly today.”

Actress and model Elizabeth Hurley led the tributes to Warne from overseas on the day of his funeral, saying her “heart aches” that could not be in Melbourne on Sunday.

She shared photos taken of her and Warne in Sri Lanka to celebrate their 2013 engagement, saying it was the “happiest time” because they both had all their children with them.

“I was filming last night and, with the time jump, physically can’t get there,” Ms Hurley said online.

“It still hasn’t really sunk in that he’s gone. It seems too cruel that all the people who loved him will never have another Lion hug, but our memories will live forever.

Warne will be honoured at a state funeral at the MCG on March 30, which will include celebrity friends and at least 50,000 fans. 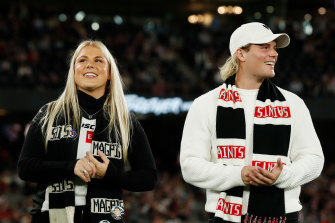 Brooke Warne and Jackson Warne, children of Shane Warne, are seen during the AFL Round 1 match between the St Kilda Saints and the Collingwood Magpies at Marvel Stadium this week.Credit:Getty

The event, with McGuire playing a key organising role, will be free with a public ballot held to secure tickets and seating. The online ticketing system for the public to use is being fine-tuned but cricket officials said on Saturday they expected it to be ready this week, potentially as early as Wednesday.

The number of tickets allocated within the opening 48 hours of availability will provide organisers with a clearer indication of how much staff and resources will be needed for the gathering. Officials expect the event to begin at 7pm.