Politicians like to say that in combating COVID-19, we’re playing the long game. Test cricket is definitively the long game. Tests are now limited to five days, but until World War II were timeless. One Ashes Test at the MCG in 1929 spanned nine days.

The pandemic is a timeless test. It’s been two long years now. Twelve months ago, Boxing Day cricket with a crowd looked like the light at the end of the tunnel. It turned out to be the light between tunnels, with the entrance to another one marked Omicron now yawning. Let’s hope this one is well ventilated. 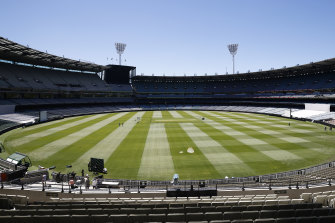 It has been a difficult year for the MCG, which is a beloved place in Melbourne.Credit:Getty Images

MCC chief executive Stuart Fox’s office looks out over Yarra Park. For too much of last year and this, his only entertainment was to watch the grass grow. That’s a long game. Footy and footy crowds slowly disappeared from sight in 2021 until by the finals, there was nothing and nobody left to see. The people’s ground was unpeopled again.

“There’s no doubt it has been a really tough year, two years for everyone associated with the ground,” Fox said.

“The MCG holds a special place in a lot of people’s hearts, from the staff who work here, the fans, the players, officials and administrators who put on the entertainment, and especially our volunteers. This place is a second home for many people, and to see it empty for so long has been jarring.

“The Boxing Day Test this year, like last year, is almost a restart for major sporting events in Australia. To have the prospect of 70,000 patrons-plus on day one following a very challenging period for Victorians is truly exciting.” 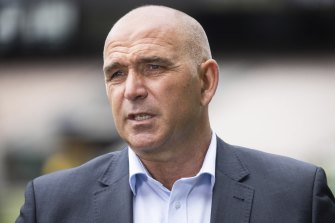 To this extended season of grass-growing at the MCG, there have been two upsides. One was the deliverance of Melbourne Football Club, which waited 58 years to win another premiership and then had to wait a little longer again to ritualise it at home at the MCG. They’ll say it was all worth it now. Their well-practised patience was their virtue and became their reward. It’s a dictum for our times.

The other was the plentiful grass that grew on the pitch for a Victoria-NSW Sheffield Shield match last month and augurs well for an entertaining Boxing Day contest. The pitch for the last MCG Ashes Test four years ago was as action-packed as a hangover.

Alison Mitchell welcomes the enlivening. The pioneering English commentator has been a regular on ABC and Seven for eight years and remembers too well Boxing Day matches that were not so much timeless as endless. “I don’t think anyone wants to revert to those matches of four or five years ago,” she said.

Mitchell still thrills to the occasion of this cricket match gift-wrapped in a festive season. “Pushing through the post-Christmas lunch slumber, or having a strategic nap in the afternoon because you know you’ve got to be awake for the first ball,” she said. “It’s a competition to see who can stay up the longest? Can you make it to lunch?” Yep, Boxing Day can be a long game in itself.

Martin Pakula knows about long games. As an avid Carlton fan, he’s been waiting 26 years, suddenly and improbably the second longest premiership hiatus in the AFL. As Victoria’s Minister for Sport, Tourism and Major Events, he’s had to authorise too many cancellations, cuts and curbs.

“As I get older, I get more nostalgic and wistful about the Boxing Day Test,” Pakula said. “I was there when Lillee broke Lance Gibbs record in 1981. I was one of the idiots giving Hadlee a hard time in ’87. So seeing the fixture endure through this pandemic is really very significant to me. It’ll be pretty uplifting seeing a big crowd stream through the gates on Sunday, and I don’t think I’ll be the only one feeling that way.”

A well populated (and inoculated) MCG on Boxing Day mid-morning will be a sight for sore eyes and heads. For the Long Room, it’s been a long time. But what can they expect?

In Adelaide, England’s bowlers tried to play a long game and Australia outlasted them. One of the effects of the long game is to exaggerate everything, for better and worse. Now, after two defeats, England are internally riven, externally ridiculed and at a low ebb. Moreover, there is no country so prone to beating up on itself.

“We’re so flipping good at self-doubt in this country,” David Lloyd once said. Lloyd – Bumble to all – is a former Test cricketer and England coach who retired this week after 22 years as a TV pundit.

Self-doubt is rarely Australia’s problem even when it should be. With their captain, Pat Cummins restored to the team, and Marnus Labuschagne this week supplanting England captain Joe Root as the No.1 batsman in the world, they’re riding high. For England, it could be a very long game.

“I can’t see how England can turn around 2-0 to win the Ashes,” said Mitchell. “I hope they can find a way to win a match of the remaining three.”

England’s batting frailties are plain to see, but the back-ups are pre-tried and in any case have had minimal practice on tour. “It might just be that in the cycle of things, Australia have better players in their top six than England do,” Mitchell said.

The forecast, not to be confused with the modelling, is set fair. The turnstiles will be open early. The MCC has warned people to make time for the extra formalities on the way in. It’s the long game, remember.

In Adelaide, some ABC and BBC callers had to isolate because of a positive case. Mitchell was not involved, and since she is double-vaccinated and takes precautions does not fear contracting COVID-19. But she does worry about being contact-traced. “We obviously can’t work from home,” she said. “You just have to minimise your lifestyle so you’re not at risk.”

She does wonder why rapid antigen tests are not part of the regime. In England, she cannot enter a media centre without evidence of a negative lateral flow test, the rapid antigen equivalent.

The MCC sees COVID-19 safety as the long haul.

“Our role as managers of the venue is to ensure that people feel safe and comfortable returning to such events where big crowds gather,” said Fox. “This is an outlook not just for the Test but also our remaining summer of cricket fixtures, and with an eye towards the 2022 AFL season.

“There will be risks as we get used to living with the virus. However, the continued wellbeing of our members, fans, staff, players and administrators is critically important and at the forefront of our operational plans.

“We have a Victorian government-endorsed COVIDSafe plan in place for this reason, and we’re very confident in our processes.”