The maidens kick us off on yet another rain-hit surface. Provincial three-year-old 5. The Herald finished hard late on debut in the country. Looks suited getting out over this trip, and had previously trialled well on rain affected ground. 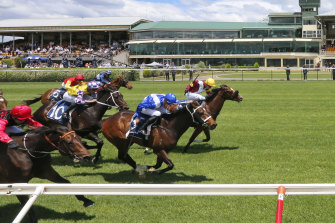 Dangers: Home track colt 2. Geisel will be hard to hold out first-up off a dominant trial win, and this is fairly thin. Was scratched from Wyong on Saturday to run here. Improving 4. Mr Cheeky with blinkers going on; and hard fit 14. Tyquendo can fight out the minor end of the prize.

How to play it: The Herald each way and quinella 2 and 5

The girls’ edition shapes up nicely for improving home track three-year-old 2. Royal Ballet who can peak at third start from a softer draw. Impressed hitting the line hard at this track on Boxing Day, and she can be tucked away off the speed and produced for that dominant last surge.

Dangers: Local mare 1. Belleplaine has only plugged home in her last few, but there’s been some depth to those races, and she’s reasonably well treated after the 3kg claim. Include Medaglia d’Oro filly 6. Golden Years on debut behind three trials; and 12. Pharaoh’s Reign fourth-up in exotics.

How to play it: Royal Ballet to win

Very testing sprint here, although talented four-year-old 2. Mirror One is suitably placed second-up with blinkers applied. Was easy in betting resuming before doing her best work late in metropolitan company, and he’ll relish getting back on the bigger track.

Dangers: Improving 3. Diamond Tipped sat closer at second start before sticking on okay, although suspect he’s more advantaged when ridden further back. Watch the betting on 6. Talons resuming for only his second start behind two trials, and hit the line late in handy sprint company on debut last autumn. Debutant Xtravagant three-year-old 7. Xtra Intent is also a key market watch off two progressive trials, despite drawing the outside barrier; while provincial mare 10. My Belladonna heads the rest second-up.

How to play it: Mirror One to win

Hard to see progressive home track four-year-old 4. Sea Legend being beaten fourth-up if he gets a clear crack at them from the 300m. Was close-up in the Tuncurry Mile before sweeping home for a dominant CL1 win at the Gold Coast. Tracking nicely for the extra trip, and he’s a reliable wet-tracker.

Dangers: Well bred and improving 2. Sir Diamond charged home from a mile back at Scone before again making up plenty of ground in a handy CL2, and he’s also advantaged over the longer journey, despite climbing to 61.5kg. Taree colt 9. King Kakau has been in and around the money all prep, and draws to get a soft run with winkers replacing blinkers. Gap to the rest, but include provincial mare 5. Trescha if you’re playing the trifectas and first fours.

How to play it: Sea Legend to win 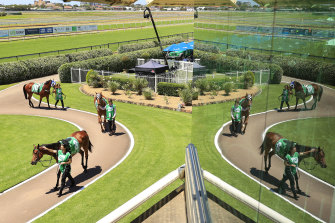 Racing returns to Newcastle on Monday.Credit:Getty

One of the tougher and more open races on the card. Got plenty of time for six-year-old provincial mare 13. Miss Twenty Twenty who is much better placed dropping back to this distance over which he won two starts back at this track. Travelled well to the 250m in classier provincial grade last start before failing to run out the mile, and she’s well treated on the limit weight.

Dangers: Emerging three-year-old 8. Lonely Power can peak after two runs back, with blinkers back on. Press Statement filly 10. The Storm In Me gets back on her preferred rain-affected ground from a soft draw. Consistent five-year-old 9. Dodecanese has been right on the winner’s heels in his last two, although a sharp drop in distance from a wider draw is query; while 3. Members Only improves third-up over a bit more ground.

How to play it: Miss Twenty Twenty each way

Like the value here about progressive metro three-year-old 4. Hadouken after rushing home to win his maiden on the course proper here second-up, and that was potentially a handy form race.

Dangers: Metro filly 6. Field Wiri carries the class factor, freshened up behind a sharp trial win, but destined to go around under the odds from a tough draw. Watch the betting on home track filly 14. Mauricently who has trialled okay, and returns for only her second start since powering home to win a maiden at Coffs in early spring. Metro three-year-old 5. Inordinate Opinion snuck right under the market guard at big odds thundering home to win his maiden here third-up, but that was a weak race.

Plenty of chances in the closer headed by resuming filly 6. Sebring’s Rose who hasn’t started since surging home to win her maiden on debut in better provincial class. Given a quiet trial, and headed for much better races than this.

Dangers: Progressive filly and first-up winner 13. Don’t Doubt Katie is suited over 150m further, although likely to drift a long way back from the low draw. Consistent mare 5. Miss Konjiki has been close-up in tougher grades since sweeping home to win her maiden three starts back. Still only won twice from 16, but placed a further 10 times, and she’s well in at the weights this grade after the claim. Keep safe tough there-year-old 9. Tupelawara who has only been out of a place once in his last five, and draws the inside; while 1. Mandalong Roman down in class fifth-up heads the rest.

How to play it: Sebring’s Rose to win