Mitchell Marsh’s description of the way Josh Inglis hits the ball says a lot about what the wicketkeeper batter would bring to the national Twenty20 team at this World Cup – but also a lot about how regimented Australian cricket can occasionally get.

Inglis, says Marsh, hits the ball to “funny” spots when facing spin. In other words he can manoeuvre the ball to places where the fielders are not, and as he showed after moving into the middle order for the Perth Scorchers last season (298 runs at a strike rate of 142.58), he can do so with power. 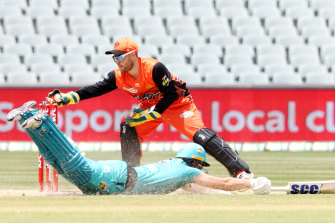 Josh Inglis has excelled with the gloves as well as the bat in the BBL.Credit:Getty Images

“He hits to funny parts of the ground,” Marsh said from Abu Dhabi. “I think all good players of spin these days hit over cover, and he’s extremely good at hitting over cover. He’s got the slog sweep, he uses his feet.

“He’s not overly tall, so his eyes are quite low to the ground, which helps him pick up the length really quickly, and he plays spin off the back foot extremely well. So, I think he’s got a well-rounded game to play against spin and for a smaller guy, he’s got a heap of power.”

It would be a departure from Australian cricket’s recent conservatism to play Inglis instead of Matthew Wade in the tournament, even though the left-hander has no middle order record to speak of and is not being realistically considered to replace Aaron Finch or David Warner at the top.

But Marsh, who formed a potent middle order combination with Inglis during the BBL before he was promoted to No. 3 in the T20 line-up earlier this year, believes that the 26-year-old has the sort of ability to be reckoned with at the top level.

”We’ve seen over the last couple of seasons what a talent he is with both bat and gloves,” Marsh said. “The signs he showed last year, the ability to adapt and move into the middle order, he plays spin extremely well, will hold him in good stead for international cricket.”

Interestingly, Marsh has evolved his own T20 batting, through realising his power game could become a little too predictable unless he could also find “funny” spots to place the ball against spinners. His remedy was simple: ask Adam Zampa how the wrist spinner would tie him down.

“I just asked him where he would bowl to me to try and stop me from scoring,” Marsh said. “I think if I can nullify bowlers from doing that and get the game a bit more on my terms when playing against spin, it becomes a little bit easier, and you get more boundary options.

“I’ve watched Marcus Stoinis, who uses the crease unbelievably well, getting back and hitting guys over deep midwicket off the back foot for six. I think when you start playing shots like that, then you get more balls in your area to look down the ground.”

Marsh, who got engaged to his partner Greta over the winter, is hopeful of forcing his way back into the Australian Test side for the Ashes after a strong display in the 2017-18 series, even though his path would currently appear blocked by his WA teammate Cameron Green.

Once he returns home from the World Cup, Marsh flagged that he would more than likely handover the BBL captaincy of the Perth Scorchers to Ashton Turner.