As one of England’s all-time most prolific run scorers, Graham Gooch knows a thing or two about setting the tone of an innings.

That’s why he’s thoroughly enjoying the ‘Baz-ball’ revolution that has transformed the fortunes of the Test team this summer.

Opener Gooch notched 8,900 runs in Test cricket but fears for the longevity of the ultimate format as the white ball game encroaches ever more. 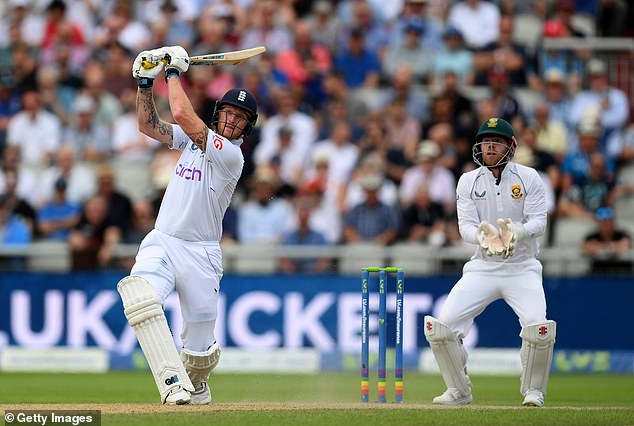 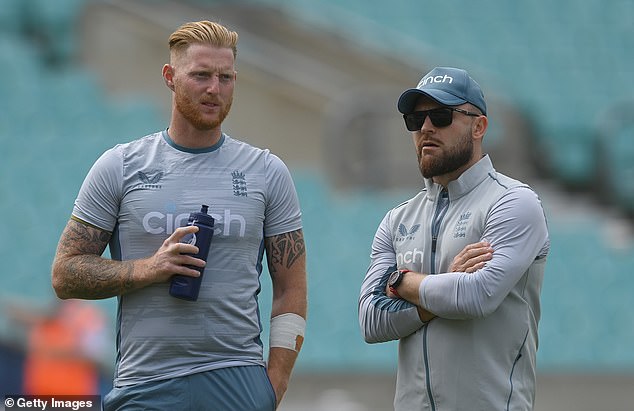 So he is grateful for the forceful style devised by Ben Stokes and Brendon McCullum that has delivered a 3-0 sweep of New Zealand, a draw with India and has the ongoing series against South Africa tantalisingly poised.

‘What I am not in favour of is what I call “wait and see cricket” which is to play the game, just see how the game develops and see who comes out on top,’ Gooch says.

‘I am in favour of attacking intent to win the game and to play attractive cricket. 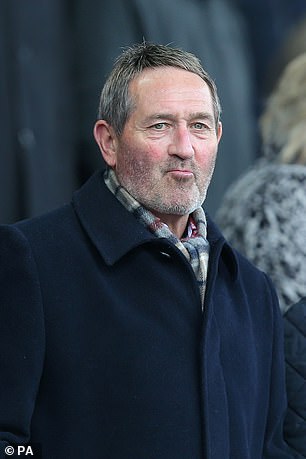 ‘You have got to put the emphasis on trying to push the game in your direction, you have got to make the difference and keep setting the agenda.

‘I am really impressed with England because we are playing cricket with intent. You go out there and try to win a match from ball one.

‘You go out there with every player having the attitude of wanting to influence the match.

‘We all know that Test cricket is under huge pressure from the white ball game.

‘But Ben Stokes in particular is leading from the front, he is playing the ultra-aggressive game and it is certainly exciting for Test cricket and something we all like to see.’

Gooch, 69, acknowledges that such a high-risk, high-reward strategy cannot always pay off.

We saw that in the first Test at Lord’s, when South Africa’s fearsome pace attack skittled England for 165 and 149 en route to an innings victory.

But England responded in style at Old Trafford, recording an innings victory of their own thanks to heroics with both bat and ball from skipper Stokes. 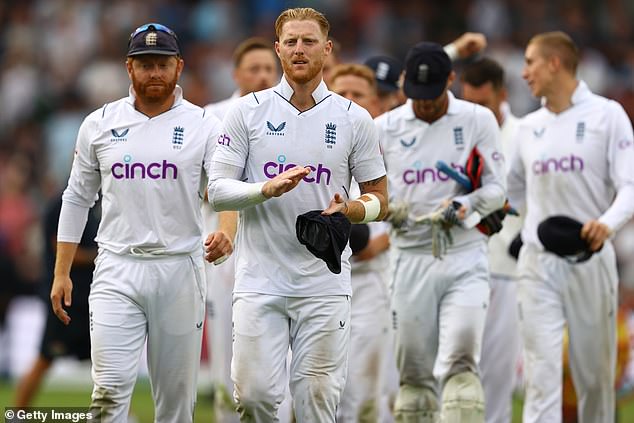 It sets up Thursday’s deciding third Test at The Oval perfectly, though England will have to cope without the talismanic Jonny Bairstow after he slipped and broke his leg on a golf course.

Yorkshire’s Harry Brook is likely to step in having been first reserve for much of the summer.

‘I have a lot of time for Harry Brook,’ said Gooch. ‘I am an ambassador at Essex Cricket so I see a lot of County Championship and he is an exciting young talent.

‘One door closes on Jonny, who has been absolutely outstanding this summer, and it gives an opportunity to another player.

‘The reins have been loosened a bit for Jonny. He has been moved around a bit over the years, from wicketkeeping to batting No 5, batting No 6, batting No 3, every position. 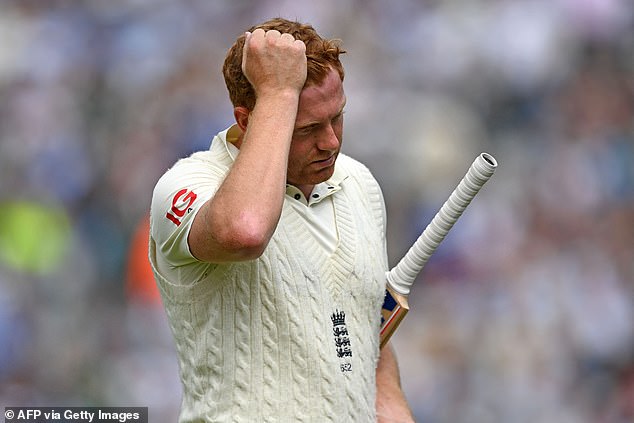 But England will have to win the match without talisman Jonny Bairstow, who broke his leg 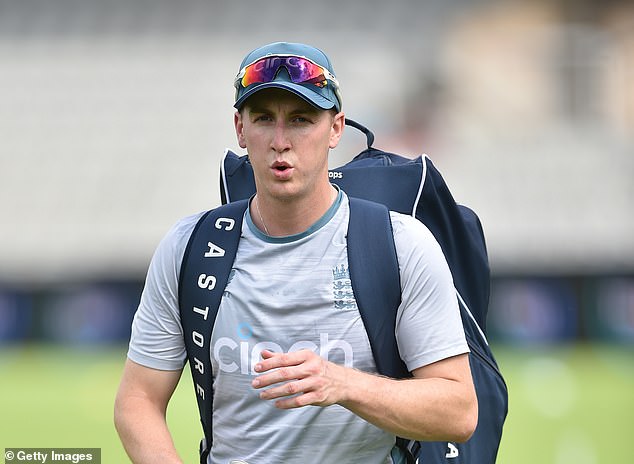 ‘I think Brendon McCullum and Ben Stokes have backed him, told him to play, told him he’s not playing for his place.

‘He has shown that with a bit of freedom he can win matches for England.’

A good performance by Brook will only ramp up the pressure on the struggling Zak Crawley, who has failed to reach double figures in six innings this summer.

‘They are showing huge loyalty and Crawley is an exciting young talent but he’s not had the best of times of late,’ said Gooch.

‘They have made the decision, they have stuck by him and shown their belief in him, which is really good. 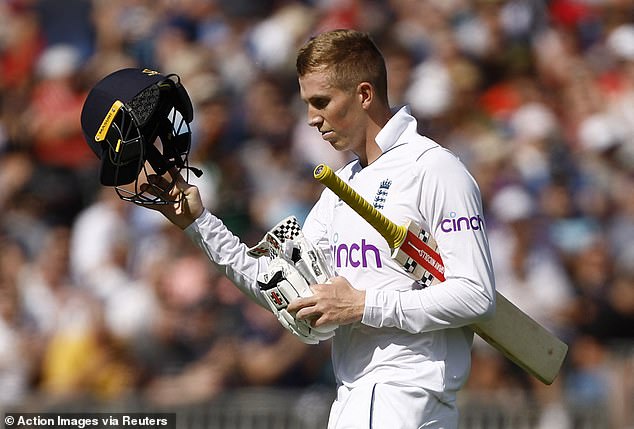 ‘But there always comes a time with any player who is not doing so well when you might look to make a change.

‘It doesn’t mean someone can’t come back and regain their place having had a break from Test cricket.

‘He is a young player trying to make his way so he is under pressure. International cricket is all about pressure.’

Gooch was often an immovable object at the crease – not least when he famously made 333 at Lord’s against India in 1990 – but times have changed with many Test matches barely making the fourth day nowadays. 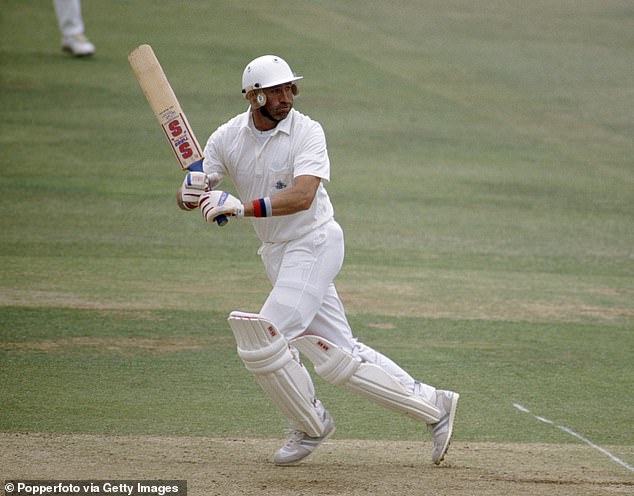 ‘The game is played at a faster pace and draws are rarer than they were in my era,’ he says.

‘The players are not prepared to occupy the crease any more, they are more aggressive and that’s the influence of the white ball game in the last 10-15 years.

‘Mind you, the aim in Test cricket is the same as it has been for 100 years.

‘You want to bat once and bat well, get a big score, then bowl them out twice, like England did at Old Trafford.’

And they would certainly take a repeat of that to crown a thrilling summer.