Cameron Green grabbed a five-wicket haul and David Warner and Steve Smith both starred with the bat as Australia defeated Zimbabwe by five wickets in their opening ODI at Riverway Stadium in Townsville.

After Zimbabwe were sent in by Australian skipper Aaron Finch on Sunday, Green (5-33 from nine overs) was the star with the ball as the tourists were bowled out for 200. 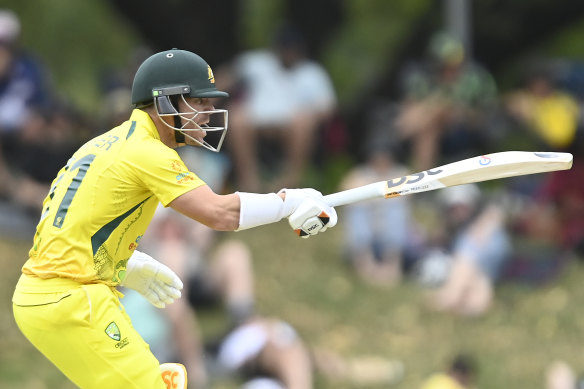 David Warner starred for the Australians against Zimbabwe on Sunday.Credit:Getty Images

The all-rounder removed dangerman Sikander Raza and skipper Regis Chakabva early on and then came back to mop up the tail, with Australia finishing on 5-201 off 33.3 overs.

Raza had made three centuries in his previous six innings, while Green had only previously claimed one ODI wicket for Australia. 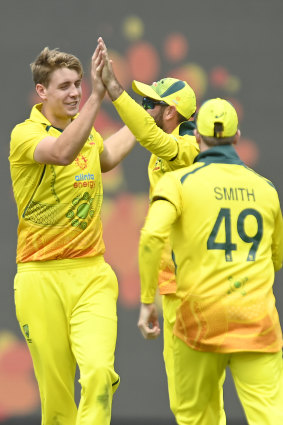 Cameron Green celebrates after taking the wicket of Sikandar Raza, one of five he collected.Credit:Getty Images

Adam Zampa (3-57) had Madhevere caught and bowled with the last delivery of his 10-over spell.

Warner set the tone in the Australian innings with a stylish 57 off 66 balls after Finch chopped on in the ninth over for 15.

Warner was well-supported by Smith, who made an unbeaten 48 from 80 balls at No.3 as Alex Carey, Mitch Marsh and Marcus Stoinis all fell cheaply to spin at the other end.

Back-to-back maximums by Maxwell handed Australia a win in their first of 17 ODIs before next year’s World Cup in India.

Before play Andrew Symonds’ children, daughter Chloe and son Will, joined the Australian team for the national anthems and ran the drinks during Zimbabwe’s innings, at the same venue as his funeral in May.

Behind them, ‘Roy’ and his Test cap number 388 was painted into the turf in striking white letters, reminiscent of the white zinc Symonds plastered on his lips during his playing days, as part of a moving tribute.

Game two of the best-of-three series is on Wednesday at the Riverway Stadium.