Victorian greyhound trainers are threatening to boycott races on Saturday because of a dispute over prizemoney and claims they are being treated unfairly by welfare officers.

Leading trainers including Mark Delbridge and Jeff Britton are among those who have decided they won’t nominate their dogs for The Meadows, Cranbourne or Ballarat on Saturday, with the Greyhound Owners Trainers and Breeders Association Victoria (GOTBA) leading the action. 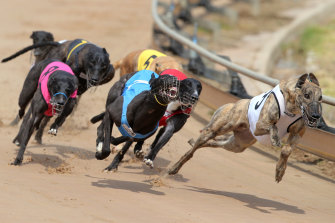 Greyhound trainers are threatening to strike this Saturday over a pay dispute and claims of unfair treatment.Credit:Standard

As well as being dissatisfied with prizemoney, the association is campaigning against Greyhound Racing Victoria because of what they describe as unfair treatment – including the regulator’s harsh stance on contaminated feed. The trainers argue welfare officers are treating them like quasi-criminals.

GRV released a statement to participants in May, warning them against feeding knackery meats to their dogs due to the risks that they could contain prohibited substances and announcing they would increase penalties for inadvertent positive drug results from September 1.

“Unfortunately, despite the well-understood risks, there is an increasing number of greyhounds being presented for racing while contaminated by prohibited substances,” GRV said in the statement.

“The Victorian Racing Tribunal (VRT) has also expressed its concerns in a number of recent matters regarding the volume of cases that continue to come before the VRT claiming accidental contamination.

“Whilst each case will continue to be assessed on its own merits and in accordance with GRV’s Prosecution Guidelines, participants should expect increased penalties for breaches relating to the feeding of knackery meat or contamination from human medications or other human foods.”

But Delbridge said stewards and welfare officers were taking their jobs too far.

“When welfare [officers] come around, they kind of treat you like a bit of shit, they treat you like criminals, even though you’ve done nothing wrong,” Delbridge said.

GRV, who has met with the GOTBA as recently as last week to discuss the issues, dispute the claim.

Delbridge said he expected a number of his peers to strike on Saturday.

“There is a few that I know of that aren’t entering,” he said.

“Let’s hope [it sends GRV a message]. It might not do much at all; we might have to do another one for two or three days.”

According to the GOTBA, prizemoney in greyhound racing in Victoria has stagnated as a proportion of GRV’s income.

But the sport only a few weeks ago announced prizemoney increases for next season worth about $6 million more than this season. This season’s purse was also $6 million up on 2019-20.

Asked why he was supporting the strike, Britton said: “I think it’s probably important to support some of my fellow trainers,” adding he had up to 10 dogs who would not run at The Meadows on Saturday.

“I’m normally at the top end of training greyhounds, I race in the city, and as long as I can remember it’s been $5000 first prize at the city tracks. We’re at $5280 [now]; whether it’s 10 years later or eight years later, I don’t know but it just hasn’t risen.

“Our costs in that last eight to 10 years would be more than double.”

GOTBA president Lynton Hogan said GRV should be committing no less than 50 per cent of its annual income to prizemoney.

“This financial year that’s just about to end, Victorian participants will have the lowest percentage return of the sport’s income this century,” he said.

“What that means is there’s less prizemoney and less returns that participants have to not only care for themselves but care for the greyhounds.

“It’s always a pretty firm step for people to take direct action but we’ve got a lot of support from people we’ve contacted and people that have contacted us.”

Nominations for Saturday’s race meetings close on Wednesday. A GRV spokesperson said “race meetings will go ahead as planned with adjustments made to the racing program if necessary”.

In response to claims that GRV has not invested in track safety, the spokesperson

said more than $30 million had been allocated to research and implementing track safety over the past five years and fatalities are down from 107 in 2018 to 48 this year.