Country jockey Jarrod Fry is hoping to make the most of a rare Group 1 opportunity at Caulfield on Saturday when he rides the well-fancied Tuvalu in the Sir Rupert Clarke Stakes (1400 metres).

Fry, 33, has developed a great association with the Lindsey Smith-trained five-year-old gelding, having ridden him at his past six starts for four wins and two seconds, and he is hoping he is the horse that can propel him to success on the big stage of racing. 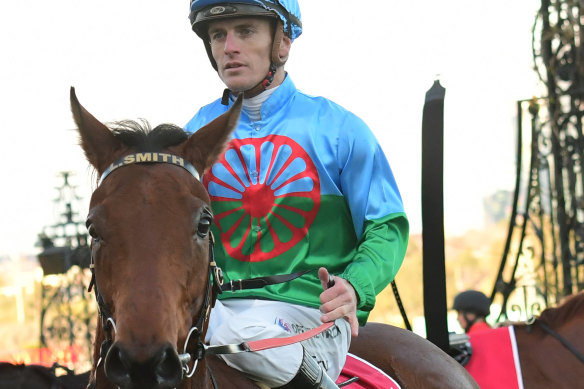 Tuvalu will be only his second ride at Group 1 level and he is thankful for the opportunity. His only other Group 1 ride was an apprentice in 2013 when he rode Bel Thor in the South Australian Derby.

“The horse and Lindsey have been very good to me. I’ve been lucky enough to repay their faith and the ownership group, led by ‘Wellsy’ [Chris Wells], have been great to me. They are really good people so it would be great to win on the horse,” Fry said.

Not for one second does Fry believe he is out of place riding in a Group 1 event against the likes of Damien Oliver, Craig Williams, Damian Lane and Jamie Kah.

Last season Fry won the Victoria country jockeys’ premiership with 109 winners, and he is aware that other country-based jockeys have springboarded from this to become top Melbourne jockeys late in their career.

In the 1980s Camperdown-based Neville Wilson emerged from being the top country jockey to becoming a regular city jockey and a five-time Group 1-winning jockey.

“I look at Dean Yendall. He was the same, he’d ride plenty of winners in the country and win country premierships, but it wasn’t until later in his career that he got his chance in town and then he started to get the G1 rides and winners,” he said.

He said he had two nice auditions for group races with his listed wins on Saltpeter on Caulfield Cup Day and Milton Park on Melbourne Cup Day.

“Last spring I didn’t have many bullets, but I was able to ride a winner at Flemington on Melbourne Cup day and also a winner on Caulfield Cup day. With minimal opportunities you’ve got to remind people you can do it,” he said.

Fry won a race not long after WA trainer Smith set up his Warrnambool stable in early 2019.

“I took off at the halfway mark at a race at Warrnambool and won the race,” Fry said. “Lindsey had a chat after the race and said he liked jockeys who took the initiative. I had a couple of rides for him after that and got some success and it’s taken off from there.

“Now I go down once a week to ride work for him and our relationship has got stronger and stronger. We see eye to eye, he’s got really good staff and it seems to work. I haven’t had a connection like this before.”

Fry said Tuvalu didn’t know how to run a bad race and handled all conditions.

“He’s never finished worse than second and the only time he’s been beaten over 1400 metres was by I’m Thunderstruck,” he pointed out.

Fry has one ride at Caulfield and he’s hoping to head back to his wife Ashleigh and their 5.6-hectare farm at Haddon as a Group 1-winning rider.