It will be a homecoming and a realisation of a dream for Haseeb Hameed on Friday. Even as England nurse their wounds from a dispiriting summer, trailing India 2-1 and desperate to ensure the tourists don’t leave with the series outright, Emirates Old Trafford will be the site of some celebration.

Two years after leaving Lancashire to rediscover love and aptitude for the game that once seemed so natural and then so alien, Hameed will be returning to where it all began as a Test cricketer. In front of the stands where he made his name and almost lost it. Near the indoor centre where he used to mould himself into a resolute opening batter and, later, tried desperately to remember that trade. And, provided he can get enough tickets, in front of his mum, dad and the rest of a family that have felt every high and low.

He is now a Nottinghamshire man, and by no means a boy. The fresh-faced 19-year-old who charmed the masses with his Disney visage and high elbow is very much a man of his own now. Replete with long flowing locks and a beard, no less. The high elbow, though, remains. As do thoughts of where he has come from and how much the fifth and final Test of the summer will mean to him. Despite leaving on relatively sour terms, there is no ill feeling at all.

“It was where I made my first-class debut, made my maiden first-class century and all those kinds of things with Lancs, I had a lot of success here,” the 24-year-old says.

“Of course growing up, that is the dream for a young Lancs player, but obviously when you’re going through difficult moments that seems a long way away and it is only natural to feel that way and wonder if it will happen.

“But I’m extremely grateful to be in this position that I’m in now where there is an opportunity to hopefully play in front of my local boyhood crowd, and play in a Test match for England.”

It has taken almost five years for three more caps, though Hameed has still maintained two 50s every three matches. The time in between has been spent losing his old, young self and rebuilding the new him out of what survived a dispiriting few summers.

There were no three-figure scores in 2017 and 2018, and just one in 2019 – against Middlesex at Lord’s – which suggested he was back in play. Alas, the struggles with form continued, and with that doubts of technique and nerve. At the end of 2019, Lancashire, all out of patience (and perhaps goodwill), cut ties. Partly out of understanding, Hameed needed new surroundings to shake himself out of his funk, partly out of continued frustrations at perceived family interactions that were starting to grate. Nevertheless, time has helped heal any such wounds. 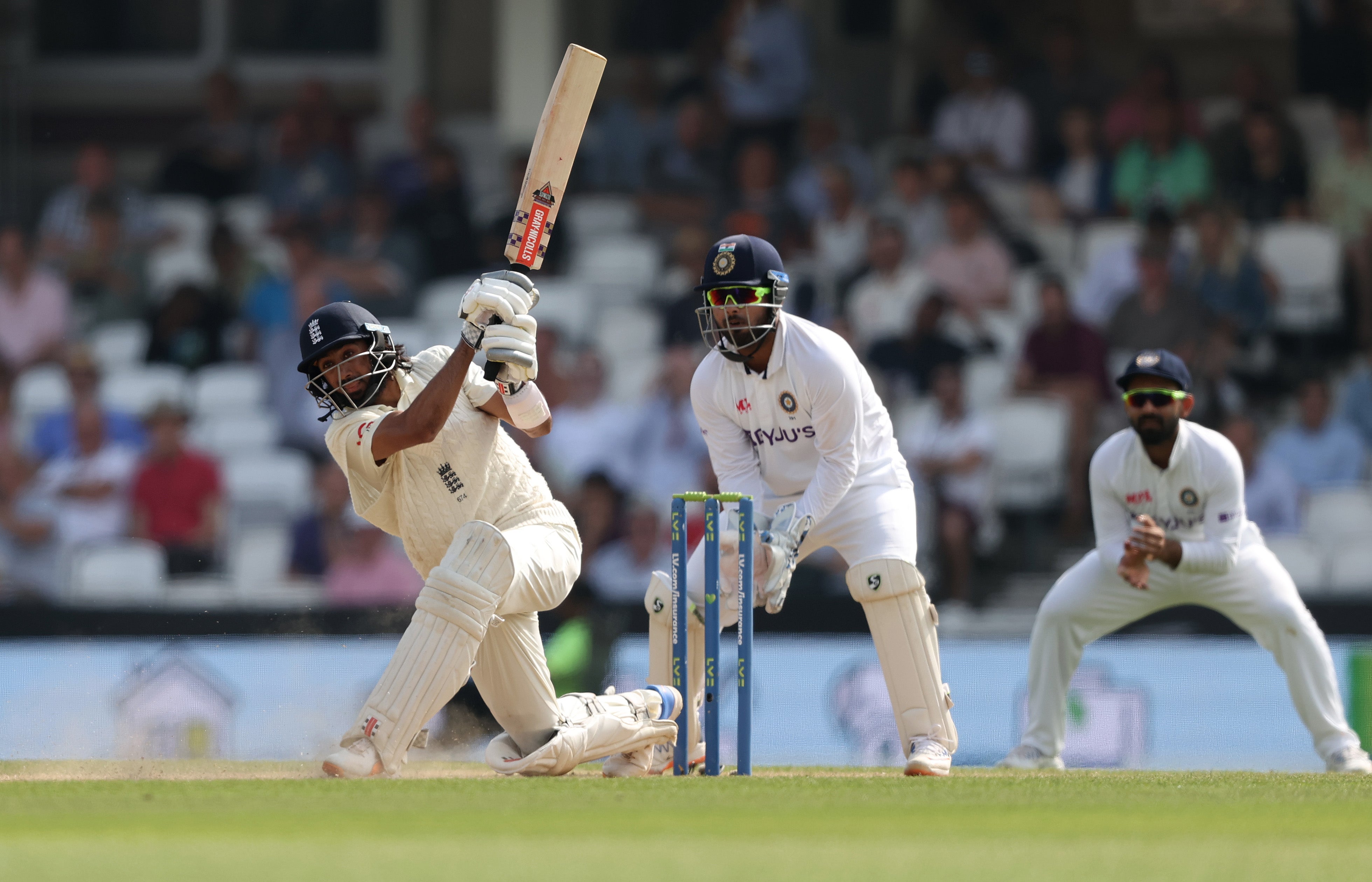 Hameed in action for England during the fourth Test against India

“I was part of a very strong age-group team that won multiple national championships, so my memories here are very positive,” says Hameed. “I’ve always said that the club holds a special place in my heart. And I don’t want the last couple of years to overshadow what I feel like has been a good relationship and a good time at the club.”

Nottinghamshire were willing to bring him to Trent Bridge, and the opportunity to work with a former Lancashire coach in Peter Moores was a major plus point. It was Moores, widely accepted as one of the best hands-on, conscientious coaches on the circuit, who brought an even more willowy Hameed in to train with the senior pros when he was just 16. This time around, it was about refinement: greasing the wheels, adjusting the trigger movements, stopped him getting too off side with his head.

Covid-19 meant the great unveiling had to wait a while. But the extra time to tinker allowed Hameed to pick up three centuries in first-class cricket this summer, the most instructive being a 112 for a County Select XI against India in July. That set in motion a recall for the second Test at Lord’s.

It speaks of where things at the moment that Hameed is open to discussing the dip across 2017 and 2020. And it says a lot about time that, actually, he still doesn’t know where it came from. But he does think something about it – perhaps the way doubt can bring sharper focus on “why” we do things rather than “how” – was necessary.

“I think it’s difficult,” he says. “I feel like there’s a number of reasons and there’s not many reasons why. It’s an interesting one.

“The way I put it in my mind now is that it was something that was just part of the journey. I guess it was quite extreme in terms of the highs of India then the lows were very low.

“It was just part of something that I had to experience. I’m just happy to take the learnings from that and hopefully, you know, be confident that it will help me going forward and make me a better player and person for it.”

He is sure of the fact that rejuvenation had to come with a change of scenery. Where they knew little of him, he of them, and, together, their clean slates could lead to better times.

“At Notts I walked in and the guys, the coaching staff and players alike up there were brilliant. They welcomed me with open arms, and made me feel comfortable very quickly. And we just got to work. Mooresy and myself just had a few conversations about where to head to in terms of the work and we just set out a plan and tried to execute it.”

Execution eventually came at Headingley with 68 in the first innings, and then 63 at the Kia Oval, which has brought some comfort after an incredibly nervy top-tier return at Lord’s. A first-ball duck, bowled by a straight one from Mohammed Siraj, then a nine in which he was dropped on four came with a fear that he still wasn’t ready. 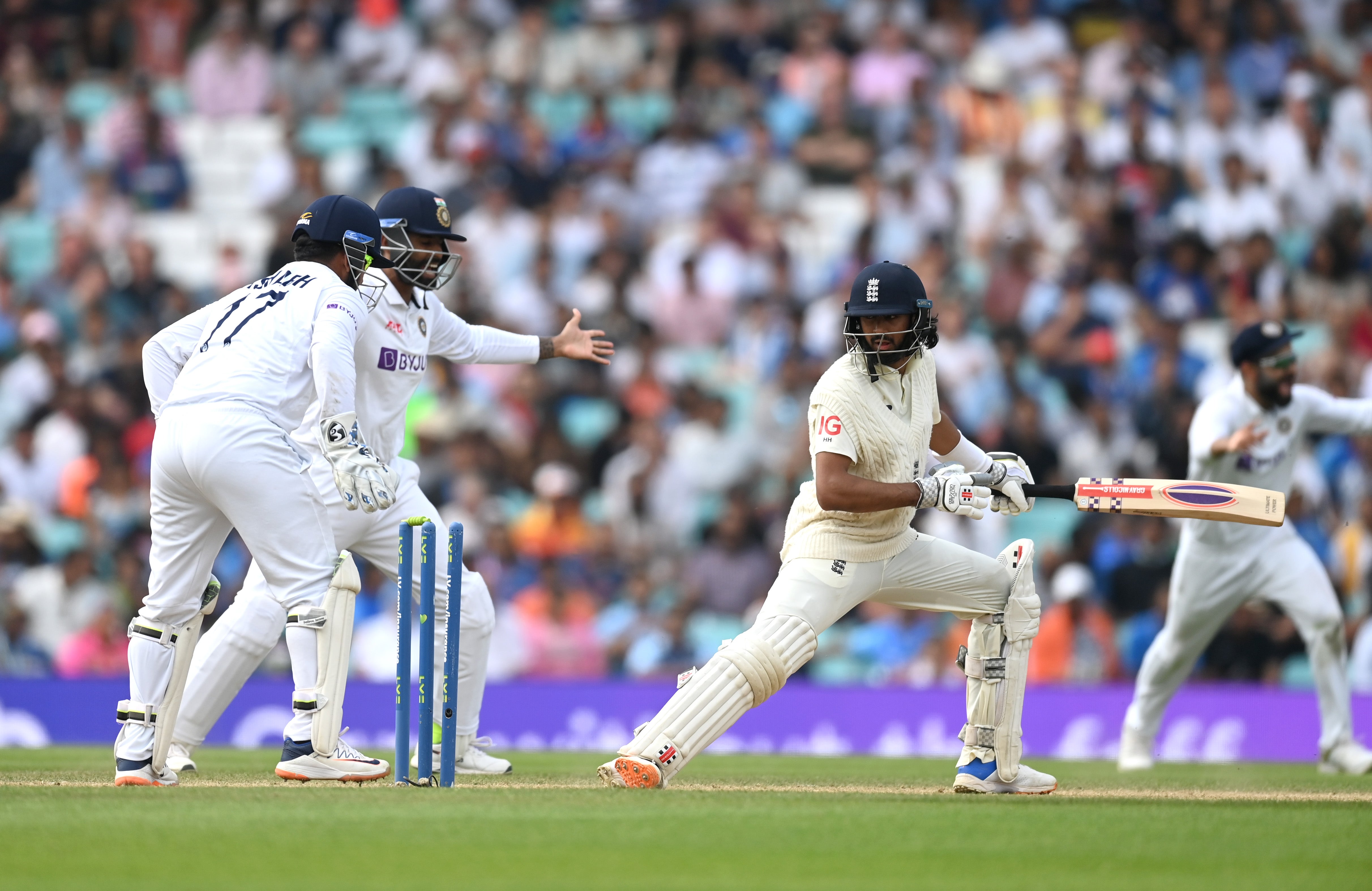 For now, it seems like he is, and that he has already struck up a fruitful relationship with Rory Burns. The pair have returned two century stands in five innings while opening the batting together. Though only one has resulted in – Hameed’s first in Test cricket at Headingley – the signs are there for a bright future.

“I’ve really enjoyed batting with Rory,” beams Hameed. “He’s actually been brilliant to bat with, he keeps things very simple, very clear in his method but also has a clear understanding of the game. I feel like when you’re batting in partnerships, especially an opening partnership, you kind of feed off each other and it’s been nice.”

Then there’s the hair. There are not two openers in international cricket more hirsute than England’s; Burns has always jumped from style to style, though Hameed straying from the regulation short-back-and-sides is very much the product of lockdown.

“Yeah, we’ve got a bit of growth between us, haven’t we?” he jokes.

Growth seems to be the operative word on a number of fronts. For Hameed, his standing with Burns and, hopefully, England going forward.