David Saker was one of three men Jimmy Anderson thanked this week for his guidance and wisdom in helping him become the first fast bowler to 600 Test wickets. Saker, the former robust Victorian seamer, has been a fast-bowling whisperer since his playing days ended, including a five-year stint as England bowling coach.

However, it was many years before when they first met, when the teenaged Anderson, stepping out for local side Burnley, took on Saker's Enfield in the Lancashire League. 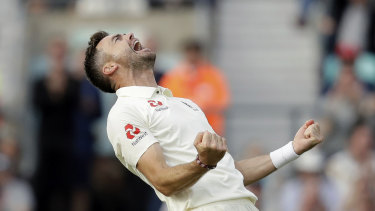 He was in and out of the team because of form and injury, and even went through a "Kevin Pietersen stage" of having a streak of red in his hair. He missed the 2005 Ashes series triumph, and was sidelined through the northern 2006 summer because of back stress fractures. His technique had changed. Troy Cooley, the Australian bowling coach who had helped engineer the '05 success, was blamed for Anderson's struggles, one reporter claiming Anderson "went from boy wonder to boy blunder".

Cooley and new England bowling coach Kevin Shine then recommended he revert to his old technique. He returned in time for the disastrous 2006-07 Ashes tour, when he had two wickets in the opening two Tests – defeats in Brisbane and Adelaide.

This was a stage when Anderson's aggressive demeanour could boil over, an area he worked on although Saker, still a good mate, says he can still be a "grumpy bastard" when in team colours. 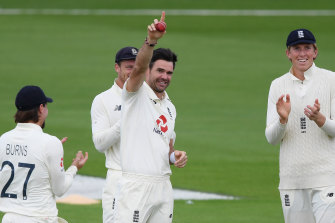 "I think it's a touch of nerves … [his] game face. He worked really hard on his temperament because when I was there, when he was having bad days, he could get too aggressive towards the opposition and go over the edge. He has worked really hard to ensure he keeps balanced. That's worked really well for him.

"There were a couple of tours of Australia that he probably was a bit too aggressive. Once he gets in his zone, he probably is as good as there is. He has proven that."

Former Australian paceman Ryan Harris, an opponent in several Ashes series, laughed when asked about the Australian attitude towards Anderson, who was infamously the subject of Michael Clarke's "broken f—ing arm" sledge at the Gabba in 2013.

"I won't tell you what we used to call him," Harris said.

"He's a good person, don't get me wrong. In the heat of the battle, he would definitely say a bit. Some of the guys couldn't understand what he was saying, because he talked so quickly with his accent. I know him and Shane Watson used to have a really good battle. Off the field it was always fine."

There have been instances off the field when Anderson's displeasure was clear. Former England teammate Graeme Swann has told the story when Anderson "blanked" him for three days on tour after Anderson had lost a game of FIFA to Tim Bresnan and Swann had started laughing at him.

Anderson has never relied upon pure pace because he was never that. It's been his attention to detail that has been his calling card.

"We all knew the calibre of bowler he was. Probably more in English conditions, to be honest. I tried to replicate [him]. I think we were pretty similar in the end, we weren't necessarily express but we hit the right area and would swing the ball. He obviously did it a bit more than me! I used to love watching him bowl," Harris said.

The lion-hearted Australian paceman retired at 35 after his body could withstand no more, and is in awe of Anderson's longevity.

"I'm jealous. I'd love to have had another two or three years," he said.

Some say Anderson's head movement is too pronounced towards the turf at the point of release but this, says Saker, is because of his "enormous shoulder rotation", one which has allowed him to swing and seam both ways and maintain rigid line and length when required.

Saker also told the tale of how Pakistan seamer Mohammad Asif had troubled the Englishmen using a "wobbled seam" one northern summer. Saker and Anderson then worked on replicating this over the next six months and, said Saker, "it's now probably one of his best" .

Former Australian opener Chris Rogers wrote in his autobiography that Anderson's "technical perfection" worked in Rogers' favour, because he got the seam in a great position "almost every time", and his action – more side on for inswing to a left-hander and front on for away swing – presented "clues" he could quickly read. The key, said Rogers, was not to commit too early to a stroke.

Anderson had only 62 wickets in his first 20 Tests at an underwhelming average of 39.20 but by 2013 became only the fourth England bowler to pass 300 wickets. Having fellow great Stuart Broad at the other end has helped Anderson strangle opponents, much as Shane Warne and McGrath once did, and much how the Australian attack does now.

McGrath was full of praise for his pace comrade this week, telling BBC listeners that Anderson has set the bar for fast bowling like Sachin Tendulkar had done for batting.

Saker watched McGrath and Anderson develop into champions, leading to the inevitable question: Who is the better bowler?

"I would say Glenn McGrath is a better all-round bowler. I would probably have to say McGrath. I am very close with Jimmy and he will probably crack the shits but McGrath's record, strike rate around the world, he is probably a better bowler," he said.

"I have been misquoted a few times on Jimmy – I think he is the most skillful bowler but that doesn't mean you are the best. McGrath is a better bowler but if you ask McGrath to do some of things Jimmy can do, there is no way he could."