Alyssa Healy broke a world record on Sunday, and that was just the beginning.

The Australian wicketkeeper-batter recorded her 92nd dismissal in Twenty20 internationals, the most of any woman or man in T20Is, moving her past Indian great MS Dhoni's benchmark of 91. 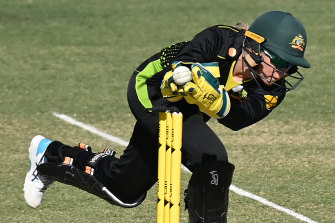 Then, having helped bowl New Zealand out for 128 after the White Ferns won the toss and batted, Healy swatted the Kiwi attack to all corners of Allan Border Field, setting up a comfortable eight-wicket win for the Aussies, which secured a series victory with one match remaining. It was Australia's 10th consecutive Twenty20 series triumph.

It wasn't as destructive as their salvo at the MCG in March, but Aussie openers Healy and Beth Mooney swiftly ate into the target on Sunday.

Healy, in particular, took to the bowling of Suzie Bates, whacking her for three consecutive fours and then a six in the fourth over.

Lea Tahuhu ended Healy's carnage the following over, but the opener's 33 from 17 balls had set the game up. Mooney (24 from 21) fell to Amelia Kerr's spin, but captain Meg Lanning (26 not out from 31) and deputy Rachael Haynes (40 not out from 31) were more than up to steering their side home from there.

Bates let a blinder slip through her fingers in the deep with Haynes on 37, before the Aussies coasted home with 20 balls to spare.

Having ridden some luck in game one on Saturday, Australia didn't need much help on Sunday. Victorian spin twins Sophie Molineux and Georgia Wareham ripped through the tourists' top and middle order, ensuring New Zealand would make no more than a modest total.

However the Aussies yet again got the benefit of a favourable call from third umpire Donovan Koch. Following an adjudication that took more than four minutes, Amy Satterthwaite was sent packing for 30 after Koch deemed none of the Kiwi veteran's foot was behind the line when Healy dislodged the bails from leg-spinner Wareham's bowling.

Healy then got her record-breaking scalp when Lauren Down spooned a ball from Wareham, which appeared to catch the back of Down's glove.

Ninety-two could have actually become 93, with Healy missing a stumping off the bowling of Jess Jonassen when Katie Perkins was on seven. 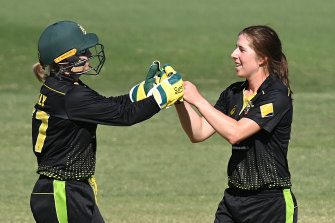 It mattered little in the grand scheme though. Molineux (2-17 from four overs), Wareham (3-26 from four) and seamer Delissa Kimmince (3-21 from three) maintained the rage despite a rare off day from Megan Schutt (0-23 from two).

Molineux claimed the crucial early wicket of White Ferns captain Sophie Devine, who gifted a return catch to the all-rounder on nine. Bates scratched her way to 22 from 28 balls but became Kimmince's first victim of the afternoon.

A couple of excellent low outfield catches from Nicola Carey off Kimmince's bowling sped up the rout, before Carey bowled Rosemary Mair with four balls left in New Zealand's allotment.

The world champions can secure a clean sweep on Wednesday, before a three-match one-day international series between the sides begins.