Another stunning knock from captain Moises Henriques helped the Sydney Sixers make it two from two in a come-from-behind victory against the Hobart Hurricanes in Launceston.

After a slow start that saw Sydney battling at 5-39, the Sixers reached 144 after Moises Henriques (73 off 48) and English import Tom Curran (27 off 21) rescued the innings with a fighting rear-guard action.

Curran returned to lead the Sixers bowling attack to a 14-run win with 3/27 off four overs.

“I had to rebuild with wickets falling around me,” Henriques said.

“That allowed me to set some sort of platform. Curran also put their bowlers under pressure which was an important partnership.”

Flying high after their record-breaking win against the Melbourne Stars, the Sixers got in trouble early against the Hurricanes and fell to 4-26 early, with Josh Philippe (5 off 11) failing to back up his round one heroics.

Hurricanes fast bowlers Joel Paris and Thomas Rogers extracted serious pace and bounce with the new ball, and the Sixers struggled on the two-paced pitch.

“[It was] hard to get a read on the pitch,” Sixers opening batsman James Vince said. “It felt tricky up [the] top. Some seemed to grip, some didn’t.” 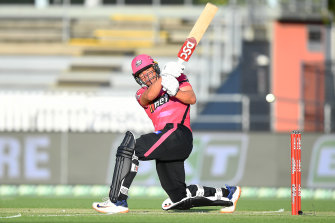 Moises Henriques led the Sixers to victory with a captain’s knock.Credit:Getty

After Nepalese leg-spinner Sandeep Lamichhane had Dan Christian caught on the boundary, the Sixers were 5-39 but a 62-run partnership between Henriques and Curran brought the Sixers back into the game.

Henriques in particular was outstanding, launching a couple of cover drives over the infield off Ellis’ bowling and a six off English all-rounder Tom Lammonby.

Curran was watchful at the start of his innings before slogging a couple of boundaries towards the finish with Chris Jordan (9) providing a small late innings flourish.

The Hurricanes bowlers struggled to hit their spots as the ball got older, conceding 81 runs off the last 8 overs. 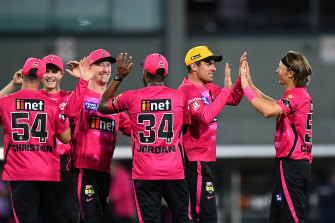 Moises Henriques and Tom Curran of the Sixers celebrate the victory.Credit:Getty

“[I] wanted to capitalise on their bad bowling,” said Henriques. “I’m always trying to work on new things and tinkering certain things. I’m obviously closer to the end of my career than the start but I like to master whatever I do.”

Despite only requiring 50 runs to score the Bash Boost point at the halfway point, the Hurricanes started slowly, securing the point off the last possible ball. Matthew Wade (20 off 18) was caught on the boundary by Jordan Silk before Sixers spinner Ben Manenti snuck a delivery through the defences of D’Arcy Short, who struggled to a scratchy 21 off 36.

The Hurricanes called for the Power Surge at the earliest possible opportunity and while it initially paid off with Caleb Jewell (20 off 11) striking a huge six off Curran, the Hurricanes lost 3-8 soon after.

Steve O’Keefe took a sharp caught and bowled chance to dismiss Lammonby while Jewell and Tim David both succumbed to catches on the edge of the inner circle. 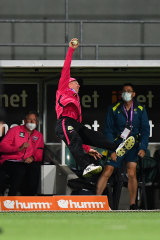 Jordan Silk made a spectacular attempt to save six runs.Credit:Getty

As he often does, Silk showed incredible skill in the outfield in the 13th over when he leapt backwards over the boundary and denied Peter Handscomb a six.

Two uncharacteristic drops from Daniel Hughes and O’Keefe hurt the Sixers however, and with 58 off 30 required, Handscomb (47 off 31) struck 20 runs off Dan Christian in the 16th over to turn the game back in the Hurricanes’ favour.

But in the end, Handscomb ran out of support, with Chris Jordan and Curran only conceding 8 runs off the final two overs to leave the Hurricanes 14 runs short.

The Sixers travel to the MCG for a rematch against the Stars while the Hurricanes host the Perth Scorchers on Tuesday.