Tokyo: Darren Hicks’ moment of glory finally arrived on Tuesday as the Australian with one leg rode like a man possessed while refusing to check his heart rate en route to a well-deserved gold medal in the men’s C2 time trial. 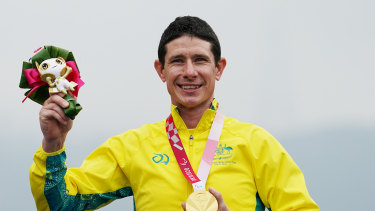 Darren Hicks on the podium after his gold medal in the time trial. Credit:Getty

Australia’s cycling team had August 31 circled on the calendar for months, and with good reason. The team won six medals on Tuesday at the Fiji International Speedway, with Hicks’s gold taking the cycling team’s overall Tokyo tally to four, across track and road races.

Emily Petricola and Meg Lemon finished second and third in the women’s C4 time trial, while Paige Greco (bronze) made it a fourth medal for the team within an hour on a memorable morning.

In the afternoon session, Alistair Donohoe, affectionately known as ‘The Flying Mullet’, claimed a bronze to back up his silver on the track, before Cooke came within just over 30 seconds of a fourth career Paralympic gold medal.

First up was Hicks, who was satisfied with his second place in the individual pursuit last week but deep down had only come to Tokyo with gold on his mind.

The time trial is a 24-kilometre race where athletes stagger their starts. It became evident early on that Hicks was surging towards glory. Pushing the pain barrier, the physical anguish was written was all over Hicks’ face. He had everything to ride for.

“I didn’t actually look at my heart rate because that was going to be too scary,” Hicks said.

“I’ve been dreaming of that for five years, maybe longer,” Hicks said. “I’m still a little bit lost for words but I’m just so, so happy.

“We quite literally did exactly what we meant to on every single lap as far as power and speed goes. I gave it everything I had and couldn’t have executed it any better. It’s just relief. I’m sure the joy and all that sort of cool stuff will come later when it sinks in.”

Seven years ago, Hicks was forced to clear his name in the courts after crashing a truck that killed two people following a brake failure.

“I had a dream and I followed it,” Hicks said. “I found something I loved and I pursued it and it kind of just went from strength to strength, which is very lucky.

“Kudos to her,” said Cooke, who is the oldest member of the Australian Paralympic team. “She’s an amazing climber. I knew this would be her course. It’s hers to win because she climbs like a mountain goat and I’m a bit heavier and a bit older. I get up the hills but not at the speed she does. I come down a lot faster.”

Cooke was diagnosed with multiple sclerosis in 1998, just before her 37th birthday, before winning three Paralympic medals in Australian colours across London and Rio.

She is now Australia’s second oldest female Paralympic medallist. If she returns in Paris three years down the track, Cooke could take the record from Gloria Pascoe, who won gold in lawn bowls at the 1980 Paralympic Games at age 61.

Australia’s oldest Paralympic medallist ever is Noel Robson, who won gold in the sailing at Sydney 2000 aged 65.