The national cricket cabinet has resolved to play as much cricket as possible this summer despite the uncertainty to the game created by Australia's second wave of coronavirus. 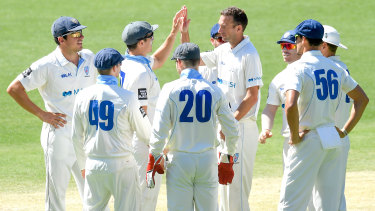 While there had been another push to reduce the Sheffield Shield, there is now a view that Cricket Australia is genuine in its want to deliver a full domestic program.

How this will happen at a time when borders are closed and quarantine measures in place will be further discussed at another meeting of the Australian Cricket Council in a fortnight.

The ACC consists of the state and territory chairs, players boss Greg Dyer and Earl Eddings as CA chairman, but does not have formal powers.

One scenario being discussed among states may see CA having to burn the candle at both ends of the summer, with an earlier start and a later finish – possibly pushing into April, which would create problems with ground availability due to the start of the winter codes.

While talks on Thursday were described as constructive and positive, in contrast to the bitter division which engulfed the game over CA's response to the pandemic, there remains some angst in the air.

Some are unhappy with the Australian Cricketers' Association over what they believe to be the player union's unreasonable insistence for there to be no cuts to domestic competitions.

Eddings has been strong in his support of a full Shield season though the board's hands are effectively tied on the issue given no changes can be made without sign-off from the ACA.

There is a financial imperative in stumping up the hefty costs to put players in hubs for international games and the respective Big Bash tournaments as they drive Australian cricket revenue.

The Shield is Australian cricket's nursery and run at considerable expense, with some questioning the wisdom of further lifting those costs in these extraordinary circumstances.

An industry source believes it would cost a state around $300,000 to move a squad of about 18 players into quarantine for two weeks, at a time when state associations are in discussions over cuts to distributions. It remains unclear who would foot the bill.

The need for the Shield to provide red-ball practice before the Test summer would be diluted if CA calls its best players into a training hub before the scheduled games against Afghanistan and India.

Meanwhile, the limited-overs tour of England will be Australia's first international assignment since the game was brought to a halt in March by the global health crisis.

Australia's players are due to leave Perth on August 23 for England, where they would stay initially in a biosecure bubble in Derby. The squad, minus those involved in the Indian Premier League, are due to return on September 17 via Perth, where they would be able to train and quarantine.