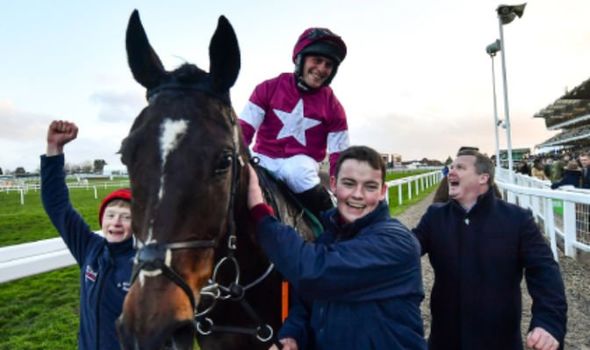 Rob James, an amateur horse racing jockey, has been captured in a video where he appears to sit on a dead horse. The images have come to light one day after award-winning trainer Gordan Elliott was temporarily banned after being photographed in a similar pose.

The British Horseracing Authority are investigating Elliott for a photograph of him astride a dead horse.

And James, who won at Cheltenham last year on an Elliott trained horse, has been captured on a disturbing video.

The Wexford-based jockey is under investigation by his home country’s authority.

The BHA have caught wind of the video but they have yet to make a statement about the matter.

James was down to ride in the 5:20 at Gowran Park, County Kilkenny today but his horse has been listed as a non-runner.

In the grim video, James climbs on the dead horse, which is lying on its side, much to the amusement of those present. 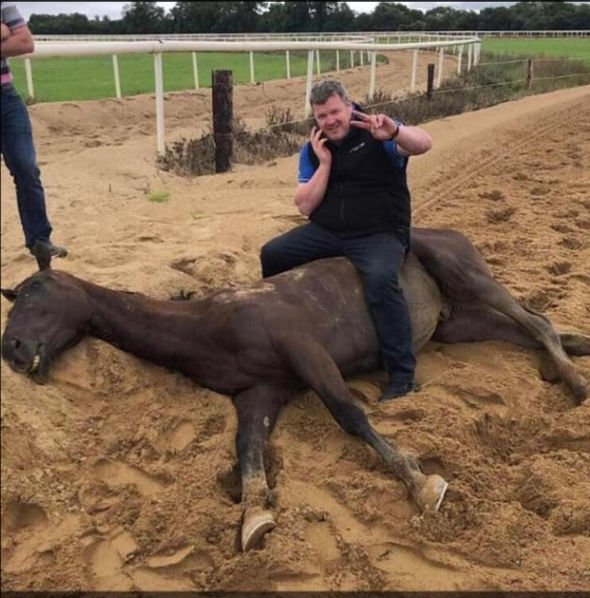 Three spectators can be seen watching on and laughing as the horse lays motionless on the ground.

James has released a statement expressing his regret of the incident.

“I have become aware of a video circulating of me on social media,” he told the Irish Field.

“I would just like of apologise for my actions which were wholly inappropriate and disrespectful to a lovely five-year-old mare, who unfortunately suffered a sudden cardiac arrest while at exercise earlier that morning, April 30, 2016.

“I sincerely apologise to the owners of the mare, the staff who cared for her, the horseracing industry and all followers of horse racing for my actions.

“To try defending my stupidity at the time would add further insult and hurt to the many loyal people that have supported me during my career. I have caused embarrassment to my employers, my family and most importantly the sport I love.

“I am heartbroken by the damage I have caused and will do my best to try and make amends to those hurt by my conduct.”

The video has surfaced just 24 hours after Elliott hit the headlines for a horrific photo of himself saddling a dead horse.

The BHA said in a statement: “The action taken by the BHA recognises that Mr Elliott is licensed in Ireland, whose regulatory body is carrying out its own investigation. However, Mr Elliott has entered horses to race in Britain, from which point the British Rules of Racing apply to him.

“The decision to refuse to allow horses trained by Mr Elliott to run in Britain is therefore an interim decision which the BHA regards as proportionate in these circumstances.”

In an earlier statement they wrote: “We expect all those in our sport to demonstrate respect for horses wherever they have them in their care.

“People who work in our industry believe their values of caring for and respecting our horses have been deeply undermined by this behaviour.

“On their behalf, and on behalf of all horse-lovers, we say loudly that British horseracing finds this totally unacceptable.”

Speaking on Sunday, Elliott said: “I would like to address the speculation and rumours that have been rife since an old photo of me began circulating on social media.

“Firstly, I apologise profoundly for any offence that this photo has caused and can categorically state that the welfare of each and every horse under my care is paramount and has been central to the success that we have enjoyed here at Cullentra.

“The photo in question was taken some time ago and occurred after a horse had died of an apparent heart attack on the gallops. I appreciate that an initial viewing of this photo suggests it is a callous and staged photo but nothing could be further from the truth.

“At what was a sad time, which it is when any horse under my care passes away, my initial reaction was to get the body removed from where it was positioned.

“I was standing over the horse waiting to help with the removal of the body, in the course of which, to my memory I received a call and, without thinking, I sat down to take it. Hearing a shout from one of my team, I gestured to wait until I was finished.”