Hugh Bowman sits atop Winx looking more real than the jockey himself staring from below. Trainer Chris Waller just wanted the statue to look like her, and when the drape was removed there was no one more relieved.

As for sculptor Tanya Bartlett, she has already moulded The Don, Les Darcy and Slim Dusty. Capturing the likeness of Australia’s greatest racehorse was almost two years in the making. 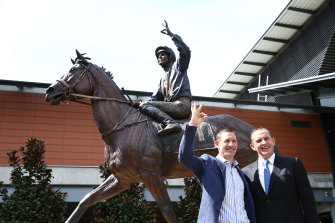 Hugh Bowman and Chris Waller at the unveiling of the Winx statue at Rosehill.Credit:Getty

“I’m my worst critic … and it’s always challenging,” Bartlett says. “I can do any horse very quickly, but to capture Winx [was tough] – she’s leggy at the back end, a sloppy rump, things that are very much her.”

On Monday at Rosehill Gardens, the home track of Waller and Winx during a remarkable career that included 33 successive wins, Bartlett showed what all the fuss is about.

A stunning larger-than-life sculpture of Winx, with Bowman in the saddle providing his signature “She’s Apples” salute, will grace a garden near the Might And Power entrance.

It weighs almost 800 kilograms, has a splash of blue for the mare’s racing colours and was funded by the Australian Turf Club, which agreed to put No.1 on the saddlecloth even though Winx rarely carried the number during her racing days.

‘I used to think about her when my eyes opened in the morning and even before they opened, especially when she was racing.’

The opening was attended by Waller, Bowman, part-owners Peter Tighe, Debbie Kepitis and Richard Treweeke’s daughter Elizabeth, among 150 guests. It will be a focal point during Sydney’s three-week Golden Slipper carnival, which begins on Saturday.

Interviewed by legendary sports broadcaster Bruce McAvaney, Waller struggled to keep his emotions in check almost two years after Winx’s final race. He later opened up about how much the 25-time group 1 winner still means to him and his family.

“I obviously don’t think about her as much as I used to, which was five or 10 times a day,” he says.

“I used to think about her when my eyes opened in the morning and even before they opened, especially when she was racing. I would think of her in the middle of the night and before I went to bed and most times during the day, just like you would with your family.

“Leading into a big race now you tend to get a little bit nervous, but you also reflect on what it was like because she took you to a whole new level with the pressure and how you prepared for your races. For me, it took me to a level I’ll never ever go again.”

As part of the sculpture process, Bartlett visited Winx at her Hunter Valley farm to ensure she had the right measurements for the statue, which is only slightly bigger than the mare.

This one meant a little more than some others she has worked on given she “was able to ride horses before I could write my own name”.

“I measured her up, poked and prodded her,” she says, “She was good for me. I guess I could read her.

“Whenever she put her ears up, I would back off or I’d say, ‘C’mon Winx’. She had a couple of weeks off and was in a good frame of mind. I rugged her and unrugged her. I was able to have a lot of time with her.

“Every sculpture has inspired me in a unique way. That’s always the case with horses, especially special horses, because it is something close to my heart.”

Waller said: “It’s just pride. I was hoping the statue told the story for what it was – and when I saw it, it did. To see that power, that dominance, that arrogance she had post-race and in the final parts of her race … it’s very special.”

Winx’s owners said she had recovered from a scare last year when she lost her first foal and was not served in the breeding season.