One of Australia's greatest achievements this century almost took a vastly different turn during the Ashes after selectors made a line-ball call which could also have had ramifications for the game's newest batting star. 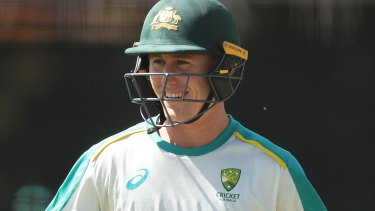 "I remember going over to the Nursery ground and Marnus was batting against Starc, [Michael] Neser and [James] Pattinson and they were bouncing the life out of him. I walked over and said "Do you think you’ll be right to go?" "Right to go?" he said, "I live for this, get me in there!""

“After he got through that spell from Jofra Archer and got those runs at Lord’s, you could sense a shift in our dressing room. He’d earned his stripes."

If Australia had lost at Lord's it could well have been England celebrating a famous Ashes victory, and Labuschagne may be among those jostling for a place in the XI instead of being locked in as the country's long-term No.3.

The Queenslander used the Ashes to catapult him to stardom last summer when he established himself as a bona fide Test star with 896 runs at 112. Only three men – Ricky Ponting, Matthew Hayden and Wally Hammond – have scored more runs during an Australian Test summer."

"It worked out as it did in England with Stevie's concussion," Langer said on Wednesday reflecting on the decision.

"These things have a way of working itself out. Whatever team we put on the park we think is going to be a good team."

How cricketers are coping during coronavirus