The Melbourne Renegades’ use of the X-factor substitute blew up in their faces on Saturday as they slumped to their second consecutive loss to the Hobart Hurricanes at Blundstone Arena.

After losing the toss and being sent in to bat, the Renegades decided to replace leg spinner Peter Hatzoglou in their line-up with batsman Mackenzie Harvey prior to the 10-over cut-off.

But unfortunately for them later on in the day, their strike bowler Josh Lalor looked to suffer a nasty side strain early in the Hurricanes’ innings. 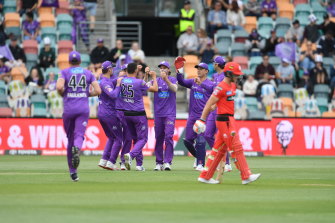 The Renegades have suffered their second consecutive loss. Credit:Steve Bell

Rather than being able to protect their stricken bowler by having an extra option in the attack, in the form of Hatzoglou, the Renegades were forced to make Lalor bowl his full four overs despite him clearly not looking right, and even coming from the field in discomfort for a period of time.

Lalor finished with figures of 1-44, with 23 runs coming off his third over.

Making the X-factor substitution even more regrettable for the Renegades was the fact that Harvey didn’t even bat.

In response to Melbourne’s total of 5-157, the Ben McDermott-inspired Hurricanes completed a comfortable six-wicket win as they reached 4-161 with 14 balls to spare.

McDermott also finished the innings unbeaten after smashing 89 off just 55 deliveries, including seven fours and five sixes, two of which cleared the mid-wicket fence in consecutive balls off Will Sutherland (0-28 off three), in a scintillating performance.

Earlier, Scott Boland (2-19) was outstanding with the ball for Hurricanes with figures of 2-5 off 3.1 overs at one stage.

The result saw Hobart move to the top of the ladder, as they also claimed the bash boost point. 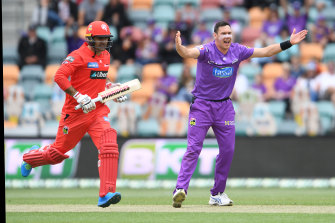 Scott Boland, right, was a stand-out for the Hurricanes. Credit:Steve Bell

Meanwhile, the Renegades have lost their last two games following on from their record 145-run loss to the Sydney Sixers last weekend.

Melbourne were well served by Sam Harper (66 not out off 52) and Rilee Rossouw (59 off 40), who put on 109 for the third wicket, but the team’s late-innings batting was found wanting as they fell short of a par score on the Hobart pitch.

A YOUNG STAR IS BORN
Renegades leg spinner Noor Ahmad became the youngest player in BBL history on Saturday. The 15-year-old from Afghanistan was his team’s best bowler on debut, with 1-27 from his four overs, and looks to have a very bright future. 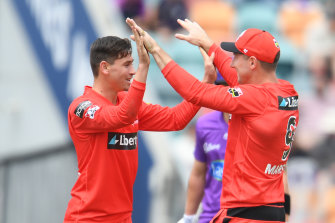 His first BBL scalp came in the eighth over when Peter Handscomb attempted to sweep him over mid-wicket, but didn’t get enough on it and sent it straight down Jake Fraser-McGurk’s throat.

CAPTAIN MARSH HAS A NIGHTMARE
With Renegades skipper Aaron Finch being rested, Shaun Marsh was given the chance to captain a side in a T20 game for the first time in his career. Unfortunately for the 37-year-old, his milestone game was one he would rather forget as he departed for one after lobbing a leading edge straight to Colin Ingram at short extra cover, attempting to hit James Faulkner through the on side with just the third ball of the match.

BOWLING, BOLAND
After 160 overs, Boland finally bowled his first career BBL maiden in the second over of the match – an over which also claimed the scalp of Renegades opener Fraser-McGurk for two.

Clipperton gets The Everest ride on Santa Ana Lane